Agrihood Developments: Not Your Parents' Suburb 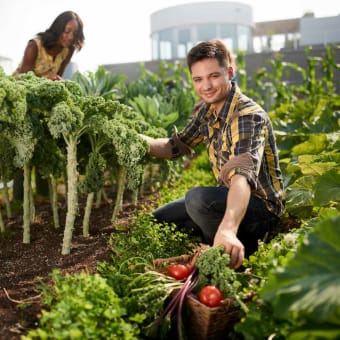 Agrihoods are made up of residential homes that weave agriculture into a neighbourhood, including greenhouses, farm staff accommodations, market stands and outdoor agricultural space. They’re the new amenity on the suburban block.

Mike Doyle had a vision. An outdoor enthusiast and business owner, Doyle is busy as the developer of Drayton Ridge and the visionary behind Ontario’s first agrihood development in the town of Drayton, Ontario.

Agrihoods are made up of residential homes that weave agriculture into a neighbourhood, including greenhouses, farm staff accommodations, market stands and outdoor agricultural space. They’re the new amenity on the suburban block; as of 2018, 27 U.S. States and 2 Canadian provinces had agrihood projects in various stages of development, according to the Urban Land Institute’s report, Agrihoods: Cultivating Best Practices.

Doyle originally planned to build a golf course in Drayton, but it became clear early on that the water and sewage capacity necessary for a golf course wasn’t feasible. “In my tours through the U.S., I’ve seen a number of golf courses turned into agrihoods,” Doyle said. “It was a blessing in disguise.”

Blessing in disguise is right. Just a few decades ago, living near a golf course held status and appealed to baby boomers. Times and values have changed, and with it the love of golf courses has diminished amongst younger generations.

Agrihoods are attractive to millennials looking to lay down roots in healthy neighbourhoods with environmental and social benefits. Agrihoods offer homeowners an opportunity to get their hands dirty, pick fruit from orchards, and escape into hiking trails. This lifestyle can also shift the isolating experience some urban cities bring. The offer of a communal farming space where people can come together to grow, share and learn from each other is a promising one.

Take the agrihood dubbed Harvest, located outside Dallas, Texas. It boasts 3,200 residential homes. Part of its success can be attributed to its promotion of creating a culture of community. “Last year, I created 340 opportunities for residents to gather—and that does not include onsite fitness classes," said Page Austin, Harvest lifestyle manager.. Austin’s position was created at the initial stage of development. Her early presence along with the number and quality of events at Harvest reinforced the development’s goal of community engagement.

“My family and I moved to Harvest because of the strong sense of community and the wonderful events,” said Priscilla Knapp, Harvest resident. “We look forward to the years our kiddos will get to grow up here. It’s the perfect place to settle down.”

In contrast, Canada has been slow to adopt agrihoods as questions arise about whether agrihoods are only possible in smaller towns, outside of urban areas. Fewer Canadians are choosing to live in rural areas with employment and post-secondary studies pulling millennials and Gen-Z’ers out of small towns and into big cities.

Like a regular subdivision, roads and services need to be built in agrihoods. That may add to congestion issues and reinforce commuter culture if residents are working in jobs in an urban centre farther away. As a result, an agrihood in a small town may lose its appeal because for its suburb feel, being car-centric, and creating housing conformity and unaffordability.

Still, agrihoods have the potential to challenge some of these concerns because of their ability to instil agricultural values in the next generation, the variety of housing options they offer, and their amenities, such as bike lanes. But the concept is still in its infancy, which means no one can say whether they’re a millennial fad or a trend that’s here to stay.

Despite challenges, it is clear the agricultural amenities are appealing for their ability to connect residents to their food compared to city living. “We just finished the last phase of 45 homes,” Doyle said. “The [homeowners] are absolutely ecstatic. They want to get out of the urban environment, with the possibility for trails to walk on. We’re putting in small style orchards. It’s right on the Conestoga River. We are blessed.”

Elyssa Pompa is a masters candidate at York University where she researches issues of equity in food-based development projects. She's an avid hiker, pasta connoisseur and never met an apple she didn't like. Elyssa lives in Toronto with her partner and two cats.