Bloobs and Rhoob: Spring and Summer Meet in a Jar 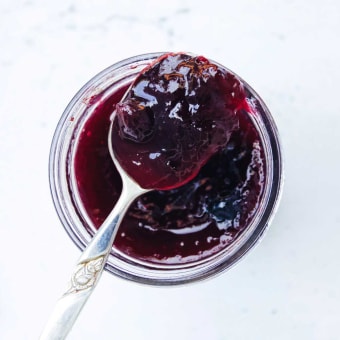 Blueberries and rhubarb a power couple that's flown under the radar too long. This blueberry-rhubarb jam gives them their chance to shine.

I got a news release today that told me the stress levels of Canadians, especially young Canadians, is on the rise.

I'm not exactly young but I feel like I'm a statistic that would support this finding. Nine out of 10 Canadians crave more time to relax and unwind, and two-thirds report feeling more stressed this year than last. The survey was conducted by an Italian cookie company, so of course 42 per cent of respondants said a biscuit and coffee helps them unwind.

There is something that sounds wonderful about sipping a mocha, nibbling a biscotti and raising my mug toward the sunshine right now. Maybe in a cafe in a faraway place, but I'd be content in my backyard on a sunny day, too.

Equally unwinding for me is time spent in the kitchen, not always to do something necessary, like make dinner, but to delve into a creative endeavour, cooking or baking by intuition and the random inspiration lurking in my fridge.

Take the pints of on-sale imported blueberries my husband bought a few weeks ago to pack in my daughter's lunch. It turns out blueberries might be her least favourite fruit so the navy orbs languished in our fridge. Right next to them were the last few stalks from a huge bunch of rhubarb I bought a few days previous. I may have been a bit greedy taking the largest bunch. When I got it home, it seemed no matter how many rhubarb oat squares I made, or how much rhubarb I stewed, little progress was made on my pile.

As it turns out, I love rhubarb jam and I love blueberry jam, and combined, I had enough fruit (and veggies — yes, I know rhubarb is technically a vegetable) to make a batch of jam. But would these two play nicely in a jar? We all know the soul mates that strawberries and rhubarb are, but blueberry and rhubarb seemed a risky matchup. So I did what any food writer and sometimes recipe developer would do and reached for my Flavor Bible. Lo and behold blueberry was written in bold under rhubarb, suggesting this was a match maybe not made in heaven but darn close. The addition of a few cinnamon sticks while cooking would tie the knot between this uncommon pair, I figured.

So jam it would be. I would call it bloobs and rhoob because it was silly and fun, and man, I need some silliness and fun right now. If you read bloobs and rhoob quickly you might see something else and do a double-take, which will hopefully induce some stress-relieving giggles like it did with me. A friend of mine told me she's seen blueberry-rhubarb jam marketed as BluBarb, a portmanteau of Brangelina proportions, but with a couple meant to last.

I know blueberries and rhubarb might seem counterintuitive. Rhubarb comes in spring, blueberries in summer, and putting them together bucks the age-old rule in the kitchen that what grows together goes together (hence the strawberry's lock on being rhubarb's reliable partner). But I've been able to find local rhubarb as late as August some years, and with the cool, damp spring we've had, and a simlar summer predicted for us, I have a feeling we'll see these two rubbing shoulders at farmers markets this year.

And that bodes well for us, especially when the mood to make jam — or unwind with more than coffee and cookies — strikes.

This jam shakes the very foundation of everything you think you know about what rhubarb pairs best with. The blueberry is that soul mate to those red stalks of spring that has flown under the radar for far too long, and this recipe is this power couple’s time to shine.

Rinse blueberries and remove any bits of stem.

Put rhubarb and blueberries in a heavy-bottom pot over high heat, and crush with a potato masher to help break them down as they heat. (A rough mash is good).

Add the cinnamon sticks and bring to a boil, stirring frequently and continuing to break apart the bloobs and rhoob.

Stir in the sugar and return to a full rolling boil, stirring constantly. Keep at a hard boil for one minute.

Store up to one year and immediately refrigerate any jars that didn’t seal once cool.