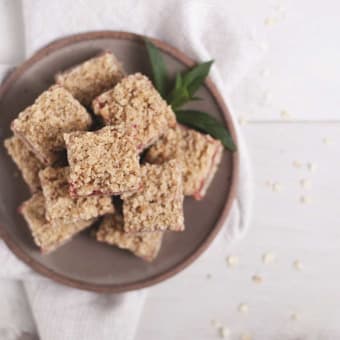 Marcella DiLonardo shows us why we should turn our ovens on at any time of year in her cookbook Bake the Seasons. These rhubarb oat squares from Bake the Seasons are one to bookmark for spring. This story originally appeared in my Eating Niagara column, published in the Niagara Dailies.

Marcella DiLonardo wishes she hung onto the email thread.

It was a back-and-forth from 2015 between the Fonthill resident and local cookbook author Tara O’Brady, whose debut collection of recipes, Seven Spoons, had just hit bookshelves.

DiLonardo, the newbie food blogger behind Hey Modest Marce, was curious whether the publisher pursued fellow blogsmith O’Brady to write her book or if she made the first move.

O’Brady wrote back to say the publisher came to her, an answer that left DiLonardo feeling a little hopeless.

“I never thought that was going to happen for me,” DiLonardo recalled.

Two years after getting O’Brady’s response, though, an email from a large publishing house landed in DiLonardo’s inbox, asking if she wanted to write a cookbook. DiLonardo’s Bake the Seasons was released earlier this spring by Penguin Random House.

“I wish I kept that email,” she said about her correspondence with O’Brady.

But DiLonardo’s desire to pen more than 100 sweet and savoury dishes to enjoy throughout the year goes back farther than four years ago and that email exchange. Seeing her name on the cover of a cookbook has been her dream since she was 16.

Since she’d come home from school in the afternoon, flip on the Food Network and watch Anna Olson, Ina Garten and Michael Smith cooking in their home kitchens.

And since she co-opted Thanksgiving dinner duties from her mother, forgot to thaw the turkey and made pumpkin pie more like the jello than pastry.

“I was so into food. I thought I was like them on TV,” DiLonardo said with a laugh. “My mom was the only one who ate it.”

She learned a lot that holiday as her siblings bemoaned their disastrous dinner. She realized timing is everything, and 12 years later, DiLonardo can pull off holiday spreads on schedule and to everyone’s awe.

Some home cooks might wonder if, at 28, DiLonardo is too young to have a story to write, told through baking how-to’s divided by season. But growing up in an Italian family in Niagara Falls, DiLonardo was surrounded by food and immersed in its seasonality.
She helped her mom in the kitchen whenever she could. “Maybe it was licking the wooden spoon that got me in there,” she said.

DiLonardo’s grandmothers tended big gardens. Growing food and preserving it were both cultural and familial norms. Feeding people, she remembered, was the greatest affection her maternal grandmother could give.

“My mom’s family grew up on the poor side so it was always about food. It was (my grandmother’s) way of giving love. She couldn’t buy things so she was always giving food. She’d show up with a big pot of pasta.”

And by nature of being a Niagaran, she knows strawberries are synonymous with late spring; peaches with summer.

Still, it wasn’t always certain she’d write an homage to the alchemy that happens in a kitchen, no matter how much she willed it as a teen.

At one time, DiLonardo toyed with running a restaurant instead. She studied finance in university with the idea that a business degree might help.

DiLonardo’s education landed her a contract job with a big bank in Toronto’s financial district. It was the kind of gig most business graduates would covet. If anything, though, it only fuelled her dream of writing a cookbook, especially when she was offered a permanent position with benefits at 24.

“I looked around and thought this is not what I want my life to be,” she said. “When I was in the financial district, I came home every night to bake. It’s my stress relief. That’s where my baking comes from. I can’t sleep at 11:30 at night so I’ll make banana bread or chocolate chip cookies. It’s a stress reliever and my creative outlet.”

Her partner, Justin, convinced her to start a blog. She did with the intention of it leading to something more. To a book. And, maybe one day, to a show on the Food Network like those she devoured as a teen.

DiLonardo quit her job in Toronto and the couple returned to Niagara where she focused on writing full-time. She turned to her shutterbug sister, Adrianna, for photography tips and guidance. She emailed O’Brady for insight into the journey from blog to book.

Then she channelled Garten and Olson, her grandmothers and mother, and diligently built a following with every recipe she posted to Hey Modest Marce, a name that’s a nod to her favourite band Modest Mouse.

DiLonardo recalled meeting her hero Olson when the pastry chef ran a bakery at Ravine Vineyard Estate Winery in the late aughts.

“I was super shy and awkward. You see them as celebrities. (I see her as) inspiration still but more of an achievable goal.”

Thinking about it, there’s a good chance 16-year-old DiLonardo would be in as much awe of the 28-year-old cookbook author she’s become.

“She’d be very impressed,” she said.

These squares are like a hand-held fruit crisp that is loaded with buttery oat topping. I love the simplicity and versatility of this recipe. Changing the fruit in the filling means you can make these in any season, since the oat base works with just about any fruit filling you can think of. This rhubarb compote will always be my favourite; the combination of the natural sweet and sour flavours is like no other. I’ve added strawberries here as well —a common companion to rhubarb — to bring a touch of natural sweetness and create a beautiful deep pink hue. But the rhubarb remains the main attraction! These squares can be enjoyed as a quick breakfast or an afternoon snack or served for dessert.

To make the Rhubarb Filling, in a medium skillet combine the rhubarb, strawberries, sugar and lemon juice. Cook over medium heat, stirring occasionally, until the fruit has softened, about 10 minutes. Stir in the vanilla, nutmeg and salt. Transfer the mixture to a large mixing bowl. Using an immersion blender, purée the mixture until smooth (or mash with a fork). Let the filling cool slightly while you prepare the base.

To make the oat base, in a large mixing bowl whisk together the flour, oats, sugar, walnuts, cinnamon, nutmeg and salt. Pour in the butter and stir until the mixture comes together. Evenly spread half the oat mixture in the prepared pan and press down until a firm crust is formed. Evenly spread the Rhubarb Filling over the base. Sprinkle with the remaining oat mixture.

Bake for 30 minutes, or until the oats are golden brown and the rhubarb mixture is bubbling. Let cool completely before slicing and serving.

In the fall months I highly recommend switching out the rhubarb filling for a cup (250 mL) of apple butter. Or try a cup of blood orange curd in the winter. Get creative!