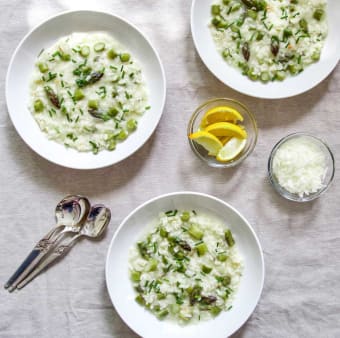 This post was sponsored by Zehrs Markets. What does that mean? I was paid to develop this recipe for Lemony Asparagus Risotto for Zehrs Markets. The ideas, opinions and wording of this post are entirely my own. Sponsored posts help me to cover the costs of maintaining this website.

After vowing when I became a mom that I would not make two separate meals for supper, I find myself doing just that night after night. It seems to be what comes when you’re raising the pickiest eater ever.

Until the age of two, O ate just about everything. Except birthday cake. On her first birthday, we had to stick a piece of broccoli on top just to entice her to poke and taste the icing. Broccoli was one of her favourite foods at the time; alas, now she wrinkles her nose at it.

She also really dug asparagus as a toddler. I took her with me to buy some fresh spears at Thwaites Farms in Niagara-on-the-Lake one spring a few years ago, and intrigued by the pointy green vegetables, she insisted on having one for the car ride home.

I gave a spear a rinse with the contents of my water bottle, skeptical about how this was going to play out. I hated asparagus as a kid, back in the days when I wore the crown of pickiest eater ever. I handed the stalk to her and she took a bite. Then another and another until it was safe to conclude my two-year-old liked asparagus. Loved it, even. Man did I feel like I was winning at parenting.

The Thwaites grow their asparagus on their farm in Norfolk County. Asparagus thrives in the area’s sandy soil, making Norfolk Canada’s asparagus capital. Norfolk grows more green — and white —spears than anywhere else in the country. The Thwaites sort and bunch their harvests here in Niagara on their fruit farm just off Lakeshore Road, and those fresh bundles of spears can also be found at my local Zehrs store in St. Catharines.

Zehrs and its parent company, Loblaw, work with more than 450 Canadian farmers in an effort to get more domestic produce on store shelves, so when you see ‘Local’ on signs in the produce section it means an item was grown less than 150 kilometres from your store.

Fast forward a few years, and my now five-year-old girl will only eat carrots as her vegetable companion at dinner. And they have to be served with blue cheese dip or bust.

I recently learned from a dietitian at a Toronto Loblaws store that it can take up to 10 times of trying something to decide if we like it, so I shouldn’t despair. I shared this fact with O, and while it made her a more willing participant in trying new things — she even recites “We have to try things 10 times before we know if we like them” at the dinner table — everything that isn’t a white carb or fruit is still a tough sell.

Even her once beloved asparagus. And even when she helps me with dinner prep, another key to getting kids interested in new or not-so-popular foods.

So while my kid loves risotto — just plain, straight-up creamy rice, and boy, that onion base better not be visible lest she throw down her spoon in protest — asparagus risotto gets the thumbs down from her.

I, however, love risotto, especially asparagus risotto, but any risotto makes me happy. Odd as it might be for the child of Germans to say, this Italian rice dish is one of my specialties in the kitchen.

Asparagus or not, risotto can be divisive, though. I remember seeing a video from a major food glossy deeming risotto must always lay flat in a bowl and be a little soupy, otherwise you’re doing it wrong. Maybe that’s how the first person who ever cooked risotto intended it to be, but the most important feeling we should derive from eating is pleasure — not superiority — so if you like risotto in a heap on a plate instead, I say have at ‘er.

I’m somewhere in between. I prefer a thinner risotto myself. My daughter is not so picky about the texture. But the contents? Well, that’s where the struggle lies.

So with asparagus season in full force in Ontario, I have, of course, made risotto, thinking it will spare me having to cook two meals come dinner. And I’ve done it with the optimism that she will rediscover her love of asparagus.

No dice on the latter but the great thing about risotto is that it’s blank slate for just about anything. And the brightness from the addition of lemon to this recipe doesn’t limit the potential of this risotto base. So if your dining companion doesn’t like asparagus — are there really people like that aside from my five-year-old? — this recipe is equally brilliant with another one of spring’s bounties: sweet green peas. Barring that, spring radishes get toned down when cooked, and play beautifully with a lemony risotto. Bring out the best features of any of these three vegetables with a sprinkling of fresh chives, another of those marvellous shoulder season harvests.

And when all else fails, plain risotto topped with bread crumbs fried in a basil-infused olive oil should get you through dinner in relative peace, because no matter what food you do or don’t love, we’re all food lovers.

As mentioned, risotto is a blank canvas that goes well with the addition of any vegetable. Despite the rumours out there, it’s also easy to make. You just have to pay attention to it but the actual legwork — stirring the pot — isn’t taxing. And it’s remarkably forgiving, too, if you have to take your eyes of the pot for a moment or two. You can easily thin it out with any remaining broth if you find your risotto gets too thick at the tail end of cooking. Feel free to also add a generous hit of butter if you want to make it creamier.

Bring vegetable stock or water to a simmer in a saucepan.

While you’re waiting for your stock to heat up, trim the woody base of asparagus (about one inch to 1.5 inches), chop spears leaving tips intact. Separate the chopped stalks from the tips and set aside.

In a heavy-bottomed pot over medium heat, warm olive oil and melt the butter. Add the shallot or onion, whichever you’re using, and cook until translucent, about 3-5 minutes.

Add the rice, stirring to coat in the butter and oil mixture and until the kernels are glistening and the edges become translucent.

Add the broth, half to one cup at time, again stirring continuously until it’s mostly absorbed before adding more.

When about half the broth is used up, add the chopped asparagus stalks, still reserving the tips. Continue adding the broth until the rice is al dente — chewy but not hard or getting stuck in your teeth.

Stir in the asparagus tips, lemon juice and zest. Then add the cheese, stirring until it’s integrated. If your risotto is getting too thick for your liking at this point, thin it out with any remaining broth or water. Season with salt and pepper.

So if you’re like my five-year-old and not into asparagus, you can swap them with 1 cup of green peas, frozen or fresh, tossed in just before adding the lemon juice and zest, and cheese. If radishes are more your thing, use 2 cups of halved or quartered radishes, depending on their size, and add them with the onions at the start. Prefer a pangrattato (those fried bread crumbs atop a plain risotto)? Blitz half a loaf of stale bread in your food processor, add about tablespoon of basil-infused or other flavoured oil, blitz again, then fry in a pan. Feel free to add some crushed dried chillies to mix if you like a bit of kick and then sprinkle fried bread crumbs atop the finished risotto.

To make this dish vegan, use two tablespoons of olive oil and omit the butter. You can also use nutritional yeast instead of cheese. However, you will forgo some of the creamy texture that’s synonymous with risotto. To help with that, use up to a quarter cup (four tablespoons) of your favourite palm oil-free vegan butter, stirred in once the nutritional yeast has been mixed into the risotto.

Lemons vary in juiciness. You may find you either need or prefer to use an entire lemon rather than half in this recipe. Start with half a lemon then sample the goods to see if more should be added.