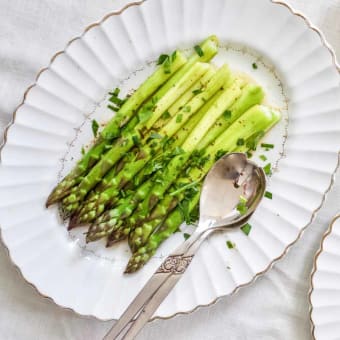 Asparagus and tarragon are made for each other. Add brown butter, which is made for just about anything, and you bring out the best in both veggie and herb. This asparagus with brown butter-tarragon vinaigrette checks all the proverbial boxes for an easy spring dish you'll keep on repeat.

Timing has never been my strength.

Take a few days ago when I was doing some eleventh hour cutline writing for a magazine I edit. I had to pen a caption for a shot of people whose names were given to me on a piece of paper the day the photo was taken by a very organized, albeit very pregnant, woman.

By the time I needed those names three weeks later, that paper was nowhere to be found. I dropped her a text, nervously acknowledging the fact that it was the day before her due date and praying she wasn’t in labour when I hit send.

Of course, she was. Mine is the kind of idiosyncrasy so ridiculous that I often feel like I could be a character in a John Irving novel.

But it turns out I’m not alone in the off-timing department. Mother Nature seems to be having problems with hers, too, this spring. Granted, I don’t know how it’s affected women about to give birth but it has delayed some of the best milestones of spring.

The wet, cool weather we’ve had means asparagus season started a little later this year. On the heels of last year when there was a glut of spears on the market, it can’t be easy to be an asparagus grower at the moment. The peach blossoms opened about a week behind schedule, too. After what felt like eternal winter, these tardy arrivals of some important markers of the season here in Niagara felt a little demoralizing.

Still, when I saw the call on Facebook to come to Thwaites Farms in Niagara-on-the-Lake two weeks ago for the first asparagus, I made sure to get my timing right and show up soon after the farm stand opened with a view to workers grading and sorting spears and the first bunches standing sentinel in a bin of water, waiting for spring seekers like me.

The Thwaites grow their asparagus in Norfolk County, on the sandy soil that at one time made the area the province’s tobacco belt, and now, its asparagus belt. They process their harvests here in Niagara on their fruit farm, and then off the asparagus go to grocery stores, including my local supermarket in St. Catharines, where I buy them when I can’t make it to the farm.

I feel a real sense of pride when I see the Thwaites Farms tags on those asparagus bundles in-store. It’s like my own version of six degrees of separation, and I want to tell other shoppers that I’ve met family patriarch John Thwaites, even interviewed him for a story once, because in my mind, he’s a rock star.

Maybe being the weirdo at the supermarket is another Irving-esque quirk. My saving grace in such a novel would be how much I adore local asparagus, and how I dote on them when I cook them during their short-lived season that runs about eight weeks through May and June. There’s soup to be made; risotto with a hit lemon zest and brightened with a few drops of juice. Hollandaise with 10 tablespoons of butter is also a must, at least once every spring.

I feel like it all makes me a little less raffish than when I’m at my most socially awkward.

And then there’s this recipe, currently on repeat right now. It’s asparagus with a brown butter-tarragon vinaigrette, and when I tucked into my first spears of the year done just this way, I knew I had to share it.

Timing with this recipe is everything, though. Brown butter can quickly turn to burnt butter if one isn’t careful. That’s a flavour profile in its own right, but those hazelnut-coloured milk solids are the ideal here, and simpatico with tarragon and a splash of white wine vinegar.

Tossed with the asparagus — I break the hard and fast rules of many asparagus authorities that vinaigrette should be served on the side for dipping rather than drenching asparagus — it’s like redemption on the plate.

The kind that gives a pass to a person for texting someone about names for a photo when she's about to give birth, or redeems the oddball in a John Irving novel.

This dish makes the kind of side that can hold its own on any plate. But it’s also great as the star attraction of a meal, served with a heel of crusty bread to sop up the vinaigrette, or topped with an Ontario trout filet or fried egg equipped with lacy edges and oozy yolk.

Trim asparagus and peel the lower half of the spears (see note). Steam for 3-5 minutes until fork tender — firm but not crunchy or hard.

Submerge or rinse asparagus thoroughly in cold water to maintain colour and texture until serving.

In a large skillet over medium heat, melt butter, shimmying it around to cover the bottom of the pan. When the butter is hot and fish-eye bubbles start appearing, add the tarragon and swish the butter-tarragon mixture until it starts to brown. You’ll see almond-coloured flecks and the butter will smell nutty when it’s browned. Be careful here: butter goes from golden to brown to burnt quickly. You may have to lift the pan from the heat on occasion and gently swish to slow the process.

Once the butter is browned, remove skillet from heat and add the vinegar, and salt and peper. Be careful here because the butter can sputter and splatter.

Toss steamed asparagus in vinaigrette, spooning the dressing over the spears until coated. Garnish with one or all of the fresh herbs and serve immediately.

Tarragon on its own knows how to assert itself. It pairs well with chives, but be careful you don’t use too many that they dominate the tarragon. The tarragon is the herb you want to shine in this recipe.

To trim asparagus, cut between an inch and an inch and a half off the bottom of the spears. Peeling isn’t essential if you’re pressed for time but it removes any remaining stringy bits at the base of the spears and looks elegant when the dish is served.