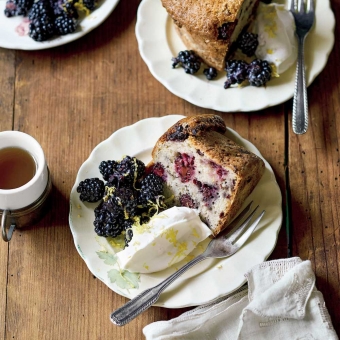 The blackberry coffee cake recipe from Matty Matheson: A Cookbook is one of many worth dog-earing  in the debut offering from Canada's most recognizable culinary export. This story originally appeared in Niagara Life magazine. Photos supplied by Abrams New York.

Matty Matheson will not yell in a bookstore.

No, Canada’s loudest chef, famous for dialling it up to 11 when hosting how-to’s on Vice’s Munchies, or his Viceland series, It’s Suppertime! and Dead Set on Life, knows there’s a time and place for raising his voice. And a bookstore isn’t it.

It’s a surprise for many who’ve turned out to take in the Fort Erie native as he travels the world to promote his debut tome, Matty Matheson: A Cookbook.

Still, Matheson at a million decibels is how the world knows him. It’s how the world fell in love with the larger-than-life chef and catapulted him to the status of Canada’s most famous culinarian. And it’s what the world has come to expect of him if they’re lucky enough to meet him in person.

Matheson doesn’t care. He’s unapologetic about who he is, whether it’s Matheson as master of unscripted, boisterous cooking videos that knock food off a pedestal others in his profession have built to pretentious heights, or it’s the appropriately quiet, introspective Matty.

He is keen, though, for more people to get to know the latter, and his New York Times bestseller cookbook introduces us to that milder Matheson. The one-line plot summary is this is the 37-year-old’s life story told through a culinary lens. But it’s really a love letter to his family and his restaurants, sweet and gentle with the odd F-bomb thrown in so it’s impossible to forget who wrote it. The heartfelt ode is underscored by family recipes from his childhood in the Maritimes and Fort Erie, and through his career as a gifted chef, known most notably for helming the kitchen at Toronto’s Parts and Labour, and surviving addiction and a heart attack at 29.

“This is way more the real Matty than the Vice stuff, you know? And it feels like, if I wrote this book 10 years ago, I’m sure I would have wrote it like the way I am on Vice,” Matheson said. “I used to be really loud. I’m just a little bit older now and little bit more wiser. I have more restraint. I’m writing about my grandparents. How else could I be? I love them. How else could I be if I’m writing about my parents? I love them. I love my in-laws.”

The book, he noted, is as true to his story as can be. He gushes in the headnotes about nearly every recipe, and his family cooked together from the book over the Christmas holidays.

It’s ethnography as much as biography, with a recipe for the very Maritime Rappie Pie, a potato and chicken concoction that requires ingredients to be couriered from down East. Matheson asserts the recipes are Canadian food, and in doing so, he forgoes the hand-wringing typical of other writers when pressed to define our collective cuisine.

“Canadian food is our terroir. It’s province to province, it’s town to town, but it’s very simple cooking,” he explained.

Matheson isn’t shy to profess his love for Fort Erie, either. So much so, he recently moved back with his wife and high school sweetheart, Trish, to raise their two children, Macarthur, 2, and Rizzo, born last fall.

Matheson puts the Niagara border town on the map for his readers, espousing everything from Buffalo Bills game day feasts at his parents’ place to the views of Lake Erie and the pragmatic, microwaved bologna bowl that were staples at his future in-laws’.

Matheson is happy to be home, now Ridgeway, after 15 years in Toronto. He’s grateful to be a 20-minute drive from the “greatest restaurant in the world”, the Robo Mart gas station and convenience store on Princess Street, which serves a chicken finger sub he craves regularly.

Ask him about it, though, and he doesn’t exactly sell the place.

“People are always like ‘Yo, bring me to Robo Mart.’ I’m like, ‘OK, but just so you know, it’s not amazing.’ I’ve been eating it my whole life. It’s one of those things where I just love it. It’s where we would go get subs, where we would go get shitty tacos,” he said. “You think that chicken finger sub is going to blow your mind but it’s just good.”

Matheson also pitches his colleagues at Vice on another Fort Erie culinary idiosyncrasy: the pizza. (The Barrel on Garrison Road is another Matheson favourite.) As the proprietor of one of Toronto’s most popular pizza takeout spots, Maker, he’s keen to get the story of Fort Erie pie, and other Canadian border city ‘za, out to the world.

“There’s better pizza in Fort Erie than anywhere in Toronto, besides my pizzerias,” he said.  “There’s no Neapolitan pizza or any of that. I’m talking party tray pizza. We’re talking a piece of pepperoni pizza. It’s just the most basic thing but it’s like… you can’t get that in Toronto.”

You also can’t get the life he looks forward to his children having, which is the best of both worlds in which Matheson lives.

“If I want to bring my children to a museum or get big city culture, I can do that. I can drive to Toronto,” he said. “I loved (going to Toronto) as a kid… My kids will have that same opportunity. They’re going to travel with me and see the world. I don’t want them to just be in Fort Erie or any small town. I want my kids to have as many opportunities as they can to see culture and to see art, and to see restaurants and to see the things that I love. Maybe they won’t like them and they’ll just want to play hockey and drive four-wheelers.”

And live life more quietly, like their father is doing these days, much to some people’s chagrin.

“I do not have time to deal with what people really think. I’m going to be me forever, and the world is trying to make you, always, something else,” Matheson said. “As long as I’m just me, man.”

In Fredericton, where Grampy was chief of police for many, many years, my grandparents had this beautiful home at the back of a cul-de-sac. When I was a kid I thought it was a mansion. It had big white pillars, and they had blue carpets and really nice furniture, and everything was so perfect—doilies and art every- where. Everything was always so nice and clean. I’m not saying we had a messy house or that we lived in a shack, but there were four kids in our house, always smashing things. My grandparents had a backyard that seemed to go on forever, where my brothers and I would play with our wooden toy guns. At the edge of the yard was a giant blackberry bush that was often used as a hiding spot from my two brothers rather than the culinary treasure that it was. Their house always smelled so good. I can still smell the coffee cake coming out of the oven and cooling bythe back window. I can see my mother, my auntie Iris, and my sister playing some card game, my dad, Uncle Frank, and Grampy watching the Expos on TV, and my brothers and me running around everyone, trying to get their attention. I didn’t include a lot of desserts in this book because I don’t like to bake, but this cake is super easy and means a lot to me.

In a large bowl, whisk together the flour, sugar, baking powder, baking soda, and salt.

In another large bowl, whisk together the eggs, sour cream, vanilla, brandy, and lemon zest until smooth.

Make a well in the dry ingredients and pour the wet mixture into the middle; stir until fully incorporated. Fold in 1 cup (140 g) of the blackber­ ries with a rubber spatula.

Pour batter into the prepared pan and add the remaining blackberries. Bake about 1 hour, until golden brown and a cake tester inserted comes out clean. Let cool. Serve with good vanilla ice cream, some whipped cream, or even just a little crème fraîche. Have some tea and play cards with your grandmother.