Chicken wing, thy name is Buffalo 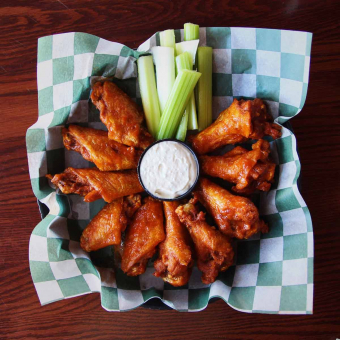 The Buffalo Wing Trail is one of Buffalo's newest attractions designed to pay homage to what may just be America's greatest culinary invention.

This story originally appeared in Niagara Life Magazine. I was a guest of a Visit-Buffalo Niagara, who covered my accommodations and took me to the different stops on the trail while I wrote and researched this story.

When Chef Andy Ruszczyk launched his pierogi factory and restaurant in downtown Buffalo, it wasn’t cheese and potatoes that propelled his success.

It was the chicken wing.

For years, Ruszczyk toiled in other kitchens throughout New York’s Queen City, turning out variations of his grandmother’s recipe until friends demanded he forgo tradition and create an homage to the dish that made Buffalo an urban legend.

He stepped up by stuffing his pierogi dough with white chicken meat, hot sauce and cream cheese. Ruszczyk deep-fried the concoction, and served the results with bleu cheese dip, celery and carrots on the side.

It was a bit of a lark but Ruszczyk realized his chicken wing pierogi was filled with possibility when he shelled out 8,000 of them from a food truck at the National Buffalo Chicken Wing Festival in 2014. By the time the hot sauce stains set, Ruszczyk had a business plan for Ru’s Pierogis that hinged solely on the world’s most famous finger food invented in the city that reared him.

“We found out (the chicken wing pierogi) worked and we had something. We found a place to build a factory,” Ruszczyk recalled during a break at his Niagara Street operation, which opened in 2016. “That’s what decided if we could make it or break it.”

The chicken wing’s ability to catapult people and places to greatness is nothing new. Thanks to what was once considered to be one of the chicken’s most undesirable parts pairing well with butter and cayenne pepper sauce, Buffalo became the birthplace of what’s arguably America’s greatest culinary achievement.

National Geographic lists Buffalo among the top 10 food cities in the world for birthing the bar fly’s favourite food. The Buffalo chicken wing even rubs shoulders with the Post-It Note on a list of 50 products that changed the world.

For the last few years, however, the wing was pushed to the side of the dinner plate by classically trained chefs drawn to the former industrial city undergoing dramatic economic revival and growing hungry for more diverse dining options.

Buffalo ambassadors were eager to trot out to a skeptical media all the new hotspots that hung their aprons on more exotic fare, like low-country foods from America’s South, and bespoke cocktails that strayed from the city’s unofficial-official beverages, Blue and Miller Lite.

Those same boosters of Buffalo’s increasingly diverse food scene have since decided there’s room at the proverbial table for both the nouveau cuisine garnering national attention and the stalwart chicken wing that made the city an appellation in all but name.

Last spring, the city’s tourism marketing organization launched the Buffalo Wing Trail to celebrate its eponymous dish. Dubbed “America’s Tastiest Drive,” the wing trail includes 12 crowdsourced and researched stops throughout Buffalo, and into its suburbs of Hamburg and East Aurora, that show the wing has as much culture and nuance as a wheel of Parmesan or magnum of Champagne.

The Buffalo Wing Trail was an opportunity “to reclaim what’s become a world-famous food in the last 50 years,” said Brian Hayden, communications manager for Visit Buffalo Niagara. “We can embrace both the city’s rich food history and restaurant scene to the fullest extent because that’s what makes us an interesting city to eat through."

That interest started in 1964 in a small Italian restaurant on Main Street. There are differing accounts of how the Anchor Bar made history by inventing the Buffalo wing. The most commonly told is that Dominic Bellissimo was tending bar late one night when hungry friends stopped by for drink. Bellissimo’s mother, Teressa, took the chicken wings she had on hand to make stock and fried them instead, dousing them in hot sauce and serving them to rave reviews.

“Before long they were throughout Buffalo and into Niagara and away they went,” said Mark Dempsey, Anchor Bar’s vice-president of sales and marketing.

Since then, the restaurant has grown to more than three times its original size, and Anchor Bar has become an international franchise. Anchor Bar wing sauce, awarded a gold medal by the esteemed James Beard Association, is even sold in Japan.

Visitors unfamiliar with the story of Teressa Belissimo’s resourcefulness 54 years ago can’t be blamed for thinking the Italian fare still offered on the menu is a token gesture. The wing is king here and it rose to greatness for its simplicity and versatility, Dempsey explained.

“It was something that could be eaten quickly with your hands. It wasn’t fussy like a steak dinner. It was hot on your taste buds and hot from the fryer,” he said. “And it’s perfect with beer. You can eat wings from a styrofoam container or wings at four- and five-star restaurants.”

No matter how it’s eaten, the wing is the Anchor Bar’s raison d’être, and rightfully so, it’s stop No. 1 on the Buffalo Wing Trail.

But the other points on the trail aren’t mere replicators added to pad out the city’s newest tourist attraction. They’re institutions that have advanced the story of the chicken wing like complex characters in a timeless novel. Hayden likens the Anchor Bar to the monolith in Arthur C. Clarke’s Space Odyssey, dropping from the sky and setting off a series of chicken wing innovations and inventions between the 1960s and 1990s that can be experienced on the trail today.

Some spots fry their wings at 375°F for 18 minutes, others for 20. Wings can be tossed in sauce or painted with it. Frank’s Red Hot and butter rule in one kitchen while secret, from-scratch recipes are used elsewhere. To the unenlightened, the differences may seem insignificant but to the restaurants on the trail, they’re what make them legends worthy of inclusion.

“From 1,000 feet up, it’s all Buffalo wings,” Hayden said. “But wings are so nuanced and they vary from neighbourhood to neighbourhood.”

Vegan wings at Merge in Buffalo.

In Buffalo’s south end, Doc Sullivan’s stands as a shrine to a recipe that’s made this predominantly Irish neighbourhood a mecca on any pilgrimage done in honour of the drum (the part of the wing that looks like a drumstick) and the flat (the double-boned wing tips).

It’s the home of the Smitty Wing, a chicken wing served in a butter-based hot sauce that contains a secret blend of six spices.

Lore has it the wives of the bar’s original owners, Ed Smith and Ray O’Neil, came up with the sauce recipe in the 70s when the Buffalo wing was still catching on. Others in the neighbourhood tried to crack the spice mix for their own versions but it originated in this Abbott Road bar, once called Smitty’s.

“Some have it, some don’t,” Tommy Cowan, owner of Doc Sullivan’s, said. “They call them South Buffalo wings, which is very similar but different.”

The Smitty Wing disappeared from the Doc Sullivan’s menu for a time but came back in 1999. Cowan, who grew up a half kilometre down the street, bought the watering hole two years ago for sentimental reasons and is ever the proud keeper of a piece of Buffalo food history.

For years, fans and food writers have tried to distinguish the details of the Smitty Wing and its knockoffs. Cinnamon, celery salt, and even nutmeg have reportedly been teased out by discerning palates, but the Smitty Wing largely remains an enigma.

“You won’t find it outside the South Buffalo neighbourhood,” Cowan said. “It’s just in this 10 blocks.”

What didn’t work for Giafaglione during his career at Bell Aerospace turned out to work wonders for the chicken wing. He used his engineer’s precision to develop a wing that draws long line-ups, and a brisk take-out and nationwide shipping business for those trying to skirt the wait.

At Bar-Bill, “home of the cheatin’ vegan,” wings are cooked longer to maximize crispiness. That toothsome texture is maintained by individually brushing each drum and flat with one of 12 scratch sauces. The results are served fanned out in a basket with a side of bleu cheese and celery — a touch that’s as pretty as it is pragmatic. It prevents the inevitable sogginess that comes with tossing wings in too much sauce, then piling them indiscriminately on a plate.

It was technique born out of “trial and error, documenting and re-documenting,” explained Clark Crook, Giafaglione’s nephew by marriage and present Bar-Bill owner.

“It evens the sauce on each wing so each bite is the same,” he said.

Bar-Bill claims their artfully plated wings are the world’s best. If the eatery gets a bad review, it’s likely from a hangry patron who endured the hour and a half wait for a table that’s sometimes required. For that reason, a second Bar-Bill location is in the works.

Naysayers may have also ignored Crook’s advice that medium is “out-of-town hot.”

Each stop on the Buffalo Wing Trail is as much a hallowed hall of the chicken wing as it is a nod to Buffalo’s rich pub culture. Take note of the wall of beer mugs at Bar-Bill Tavern or the first-name basis of staff and clientele at other stops. Both speak to the city’s blue collar roots and needing a place to unwind after clocking a shift on the line. It’s also a testament to Buffalo’s continued humility amid all its changes since the state government began pouring $1 billion into revitalization efforts in 2012.

The trail, Hayden noted, can serve as a guide for multiple visits or a day trip for the hardcore wing fan and a few friends. It also features a sidebar listing chicken wing-related points of interest, like Merge in downtown Buffalo, which offers crispy-fried seitan bites so no vegan is left behind. It also names Ru’s Pierogis for demonstrating how chicken wings can transcend, well, the wing while still honouring the city to which pub-goers the world over and their cardiologists are indebted.

“It’s one of those foods people love,” Ruszczyk said about the Buffalo wing. “It’s comfort food. If you’re not sure what to eat at a bar, you can always get a plate of wings and be happy…. You see a plate of wings walk past you and smell that smell. How can you not order wings?”

The stops on the Buffalo Wing Trail are: