A Slice of Naples in Niagara 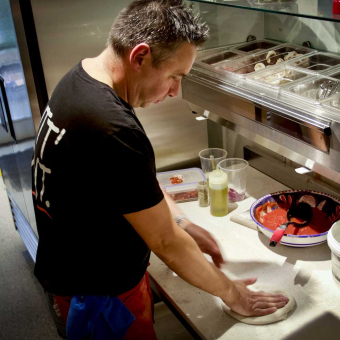 Mario Cesta, co-owner of Pie'za Pizza in Niagara-on-the-Lake, is one of three pizzaiolos in Ontario to be certified by the Associazione Verace Pizza Napoletana (VPN) for making authentic Napoli-style pizza.

I originally wrote this story for my Eating Niagara column in the Niagara Dailies.

As a boy in Naples, Italy, Maurizio Cesta spent whatever money he was given on two things.

The first was a soccer ball to play pickup in the streets with his friends. Nothing too fancy in case his chums ticked off an old Nona while mimicking the Gli Azzurri and she confiscated the ball.

It also couldn't be too fine a football for another reason: "You made sure you didn't spend all your money on your soccer ball so you had (money) leftover for pizza."

He'd buy it by the yard at his neighbourhood bakery, the carbs fuelling his best Paolo Maldini moments on his asphalt pitch.

Pizza was life back then, and it still is today for Cesta, who's since relocated to Niagara-on-the-Lake where he throws dough at Pie'za Pizza, the Napoli-style pizzeria he operates with his wife Laryssa.

To say Napoli-style almost doesn't do Cesta's post as pizzaiolo justice, however, because he's not imitating anything.

Thanks to the recent certification by the Italian pizza gods known more formally as the Associazione Verace Pizza Napoletana (VPN), the only difference between Cesta's pie and the stuff he grew up eating in Italy is that his version is made in Niagara. It's as real a Neapolitan pizza you'll find outside Naples.

More than a dream come true for Cesta, the certification makes him protector of a craft the United Nations Educational, Scientific and Cultural Organization (UNESCO) put on its intangible cultural heritage list last year.

Maurizio Cesta pulls a pie from the oven at Pie'za Pizza in Niagara-on-the-Lake.

"If you see a bad pizza, it's not right," said Cesta, who's knowledge of pizza is encyclopedic. "I love being part of the association, so I see it as a way of growing, protecting and trying to pass it on eventually if someone wants to learn."

Cesta's VPN certification puts him in the company of the best pizzerias in the world, some of which are even Michelin-rated. He's one of only three pizzaiolos in Ontario and 13 in Canada to earn the certification, which he's been working toward since he and Laryssa opened Pie'za Pizza in 2015.

"For Maurizio, seeing him the day we got the actual sign, it was on a different level," Laryssa said. "He grew up there and seeing the sign from the association, we were pretty happy."

It wasn't as simple as promising to turn out thin-crust pizzas cooked in under two minutes in a wood-fired oven in order to earn the certification. Cesta travelled to Italy regularly to train with the VPN's master pizza makers and ensure he was following all the rules for making authentic Neapolitan 'za before applying and waiting nearly a year for certification.

"He just wouldn't be able to do it any other way," Laryssa said. "He wouldn't know how and he wouldn't want to do it differently anyway."

To start, the couple had to import a 2,250-kilogram, wood-fired pizza oven made by one of two VPN-approved Italian families.

As for ingredients, finely ground Caputo '00' flour is a must. It gives Napoli-style pizza its soft, chewy crust that capitulates to every bite. Cesta makes his dough daily, in the quiet before the restaurant opens, with filtered water, single variety yeast, and sea salt. He leaves it to ferment for 24 hours before turning it into orders of Margherita or Marinara.

"That part is really important," explained Laryssa. "The recipe can vary slightly depending on the environment. Naples and Italy are more humid … and the water, the yeast and the salt is different."

The DOP San Marzano tomatoes are also critical and sourced directly from a farmer the couple connected with in Italy. They give Neapolitan pizza sauce its notable sweetness that's near impossible to fake with any other tomato.

And just in case any certified pizzaiolo ever decides to cut corners, the VPN does check up on its members. Besides, the couple noted, in an age of Instagram, you can't hide anything anyway.

Nor would they want to. Cesta has always been particular about his pizza, whether making it or eating it. If he doesn't see a wood-fired oven at a restaurant, he won't eat the pizza.

He also won't rest on any laurels, with plans for continued professional development with the VPN whenever it fits his travel plans to Italy.

"When you belong to something, you believe in it," he said. "You believe in what they taught you. Once you taste a pizza out of that oven, you don't want to cheat."