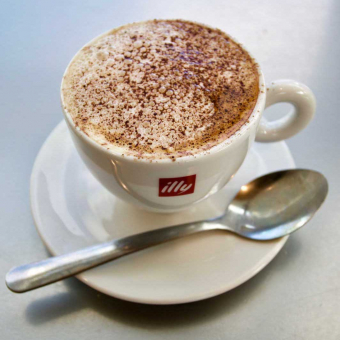 Something magical happens when a can of Illy coffee beans is opened.

The Italian national soccer team doesn’t jump out of the oversized tin but it’s the next best thing: a slow and steady stream of Italian air carrying the velvety aroma of dark roast beans.

It’s the kind of experience that could make a card carrying member of Team Tea change sides. Or, at the very least, step up to the counter at the Illy Commisso’s Bistro + Cafe and order herself a cappuccino with cashew milk and a sprinkling of cocoa.

“In coffee, like the Wonders of the World, there are nine major innovations,” explained Kyla Eaglesham Kennaley, district sales manager for illy caffé North America. “Illy is responsible for three and this can is one of them.”

That pressurized tin that exhales la dolce vita when opened enables the Italian coffee giant to transport its blend of nine highest-order Arabica beans around the globe, including to Commisso’s Fresh Foods in Niagara Falls, which officially unveiled its rebranded in-store eatery this week as the Illy Commisso’s Bistro + Cafe.

Those beans in that newly opened can I smelled on Wednesday morning wouldn’t be ready for grinding and brewing for another 12 hours — that time critical to acclimatize them to Niagara and ready them for Illy-mandated brewing protocol at Commisso’s.

But staff at the independent grocer are used to giving ingredients the time they need to reach peak form. Flour used at the in-store bakery to make breads and takeaway pizza, for example, is left to rest for a week before anyone taps into a sack.

It shows respect for ingredients but also Commisso’s commitment to turning out a consistent product that compels customers from all corners of Niagara to shop at the store.

“When Illy partners with a company, it’s important to make sure everything is consistent,” Eaglesham Kennaley said. “We know when a store treats flour that way, they’ll treat our coffee well.”

The Commisso’s in-store bistro has been a place for locals to take a time-out, catch up and indulge in the ritual of morning coffee or a midday meal since Commisso’s Fresh Foods opened on Thorold Stone Road in 2010. The new partnership with Illy shows the store’s commitment to bringing the best to their regulars and new shoppers, explained Rocky Commisso, store president.

“The big thing with partnering with Illy is it’s a world-class brand,” he said. “We want to keep bringing these kinds of products to our customers.”

Commisso and his family, including brothers Frank and Tony, have a long history of providing Niagara with high-quality grocery options, dating back to 1962 when the Commisso clan opened its first store in Beamsville.

It was only two aisles. Fifteen years later, Rocky, Frank and Tony opened one of Niagara’s first discount grocery stores in Welland and from there, the chain grew to cover a territory stretching from Niagara Falls into Burlington.

In 2004, Commisso’s stores that were fixtures in many neighbourhoods were bought by a national chain. Six years later, the brothers and Commisso’s former director of meat operations, Miro Urge, got together to open Commisso’s Fresh Foods in Niagara Falls after Rocky grew frustrated with local grocery options.

Shopping days for him entailed trips to the health food store, the supermarket, the butcher, and other stops for prepared foods.

“I remember saying this is ridiculous. People need one place to come to find all their things,” Rocky said. “We’re Italian. Food is a natural part of our lives, but what made me get back into it was a need to go shopping and find the things that fit with the lifestyle of today’s consumer. That was missing.”

Today, Commisso’s is staffed by trained professionals, including chefs at the prepared food counter and a registered holistic nutritionist at the in-store wellness centre. The store has become a destination for shoppers from throughout the region, and the new Illy Commisso’s Bistro + Cafe adds to the experience.

The space includes sleek displays of fresh pastries and sandwiches made on site, gleaming espresso machines, digital menus and staff trained to tease out the best in Illy’s coffee beans, including tweaking the grinder depending on weather to ensure the quality of made-to-order brews.

There will be seasonal offerings made with beans from Illy, the first company in the world to earn the Responsible Supply Chain Process certification for sustainable practices and the quality of Illy’s relationships with suppliers. Expect cold brew, steeped for 12 hours, in the high heat of summer, and comforting espresso shots and cappuccinos in winter.

Teas by Dammann are also an option. And those who don’t want to stick around to enjoy their java at the cafe can purchase Illy coffee machines, beans, ground coffee or capsules to take home.

“It was important to partner with Illy to create a destination for coffee. We weren’t really known for being a coffee destination…. That was really important to upgrade those product offerings for our customers,” Rocky said as new and old regulars gathered at bistro tables for their coffee klatches.

“The stories I hear now, I see ladies sitting down having coffee with their friends. This is their meeting place. They catch up on some things and go shopping. I love that. It brings people together and gives them an experience.”

*Contest winners must answer a skill-testing question and be able to pick up the gift certificate at Commisso's Fresh Foods.