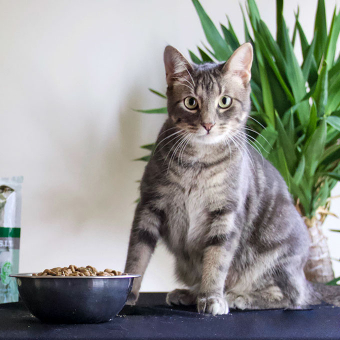 There’s no better feeling than winning the approval and affection of a cat. If you don’t believe me, ask Charles Dickens, who asked (rhetorically, I bet) “What greater gift than the love of a cat?”

For more than a year and a half, I’ve been trying desperately to earn the love of one cat in particular. He’s a big black tom I call Wayne and he’s the king of my neighbourhood.

Other cats, even wildlife, genuflect in his presence. They defer to him when he’s on my front porch having dinner, waiting patiently until he’s had his fill before moving in for their own meal.

Wayne, who’s a stray, wouldn’t let me touch him until a year ago. Even then, I’d be lucky to do two strokes down his long back before he’d hiss to tell me that was enough. I’d bow my head in those moments of rejection, praising him for being a good and handsome boy, and quickly retreat to lick my wounds. After all, “A dog will flatter you but you have to flatter a cat,” said author George Mikes.

And I have Rayne Clinical Nutrition to thank.

Days earlier, I’d received samples of Rayne’s Adult Health-RSS Pork and Potato Formula to test on my own guys, Beauregard, 1, and Otis, 13, for this post. A bag of Rayne Rewards S.I.T. pork treats for cats and dogs was included in the kit from the Guelph-based company dedicated to servicing Canadian pets, their humans, and the Canadian veterinary industry.

The contents looked and smelled like my favourite beef jerky snacks that I devoured as a child. Truth be told, I probably could eat them if I wasn’t a veg-head now. The ingredients are simply pork, cane molasses, sea salt, citric acid and tocopherols as preservatives, which fits with Rayne Clinical Nutrition’s philosophy of providing nutrients with whole foods. It’s an approach backed by veterinary research and endorsed by animal nutrition experts.

I was a little skeptical that anything a dog would eat would pass a cat sniff test, but I thought I’d see what kind of magic they’d work with Wayne after Beauregard went ape for them.

Even though he isn’t officially my pet, Wayne is an important part of my life and I want hm to live the best, healthiest, happiest existence possible, just like my own guys. I thought some high quality treats would help.

One evening after Wayne devoured another dinner al fresco on my porch, I tore a S.I.T. treat into pieces and held them out to him. He took one sniff and started eating from the palm of my hand. Wayne head-booped me when finished and let me stroke him more than twice, rubbing against my legs all the while.

I finally got the Stamp of Approval, and it was the Best Feeling Ever.

Otis and Beauregard have also appreciated the change in their food dish since switching to Rayne two months ago. Neither was particularly fond of the prescription diet I was serving previously. Rayne’s pork and potato formula, available from veterinarians, sounded like Sunday dinner to me and both guys ate it like it was everyone’s favourite meal of the week.

The potato provides a grain-free but necessary carbohydrate component to bind the kibble. There’s potato in the wet-food, too — a formula that helped ease the inflammation Otis experienced around his eyes in the summer, which I’d chalked up to seasonal allergies before switching foods.

I try to use as many pure and unprocessed ingredients in my own meals to stay healthy, so it makes sense that such an approach would bode well for those important four-legged members of our families, too. I truly believe Rayne’s simple, wholesome ingredients helped Otis heal.

As for Wayne, he still devours the S.I.T. treats, though not always out of hand. It’s much to my consternation and in keeping with the insightful words of another literary giant, Sir Walter Scott: “Cats are a mysterious kind of folk.”