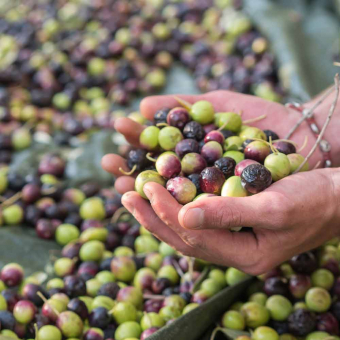 George and Katherine Kubarakos are known around Niagara as the couple behind The Olive Oil Lady. They sell olives and olive oil from George's family grove in Sparta, Greece, each year at the Niagara Greek Festival, and it's entirely worth stocking up on both.

There’s a pint-sized jar of olives in my fridge that I’ve been trying hard to ration for the past few months. Only a handful of koroneiki olives are left, floating in a wine vinegar and olive oil brine.

They were prepared by George and Katherine Kubarakos, using olives from George’s family grove in Sparta, Greece. Each year, the couple brings an abundance of koroneiki olives to Canada from that grove, either in the form of punchy olive oil, sold under their Olive Oil Lady label or as table olives. They sell their oil, and home-preserved jars of koroneiki and kalamata olives only four days a year at the local Greek festival in St. Catharines, Ont. Hence the need for rationing.

There’s 10 months to go until they resume their festival post with the fruits of their latest crop to be feverishly purchased by people like me who have learned the hard way to buy more next time.

The Kubarakos’s oil is a blend of koroneiki and athinolia olives — “liquid gold” with its pleasant bitter kick in the back of the throat. Their jars of table koroneiki and kalamata olives are worth their weight in the precious metal for their unadulterated dense flesh, and tangy zip.

“Greeks don’t like to play with olives so much,” Katherine explains about their simple preparation method using oil and vinegar. “They don’t like to combine them with herbs and make them fancy and piquant. The Greeks love tangy olives.”

The olives and their oil are points of pride for the couple, as is the way the fruit is grown and harvested in Sparta. George is quick to note that no nets are used to reap the year’s crop, an event that happens over winter with harvest dates set by the local olive oil co-operative.

Some farmers use nets to catch olives as they ripen and fall from the tree but as George points out “This is the laziest thing you can do and you’re not going to get the quality.” The problem with this method of harvesting olives, which were first cultivated in the Mediterranean some 7,000 years ago, is the fruit is usually too ripe when it falls. The prized antioxidant content has started to decline. The olives can also start to ferment in the hot, dry conditions of the region as they wait to be collected for processing.

Instead, George’s family spreads canvas beneath the branches of their trees, which are the size of apple trees. One person climbs into the boughs to rake the branches, knocking green, just-ripe olives from them.

The dual-purpose koroneiki is one of the most sought-after olives for oil. It’s called the king of the grove for its a hardiness, demanding little attention to thrive. The oil pressed from koroneiki olives is robust and herbaceous, boasting the highly valued “ahem factor.”

“If you’re consuming good olive oil, you should feel a burn in the back of your throat,” Katherine explains. “That’s the ahem factor.”

Koroneiki also makes a good eating olive. George cures his with salt to draw out the bitterness and keeps his olives in a salt cure until he’s ready to sell or eat them. That’s when they go into his simple vinegar and oil brine, which make his koroneiki and kalamata olives shine like no others. “I’ve tried the big green (store-bought) olives,” George says. “They have no taste. They don’t have the meat of these ones.”

Still, all olives are alike in one way: the health benefits they offer, including many for older adults.

Why Olives Are Good for Us

It’s no coincidence that Greeks consume more olive oil than anyone in the world, and the country is home to one of five blue zones on the planet. A blue zone refers to the lifestyles and environments of the world’s longest-living people. Think places where reaching your 100th birthday and beyond is normal — expected, even. Diet plays a role in that longevity. In the case of Ikaria, the Greek island considered a blue zone, olives and their oil figure prominently into the daily menu because of the nutrition they provide.

1. Olives are full of heart-healthy fat.

Three-quarters of olive fat is in the form of monounsaturated fat, the same type of heart-healthy fat that’s in avocados. Monounsaturated fat is a key feature of the Mediterranean Diet, a healthy eating plan that’s linked to increased longevity and reduced chronic pain.

Katherine and George both look like they’ve found the fountain of youth and it may have to do with all the vitamin E and copper that olives contain. A single ounce of ripe, canned olives has 2% of the vitamin E we need each day, and 4% of the copper. Vitamin E is known to be an anti-aging nutrient, improving moisture and elasticity in skin, while copper also bolsters elasticity and reduces fine lines and wrinkles. As an antioxidant, vitamin E protects against exposure to environmental agents, such as ultraviolet light, which can damage skin and accelerate aging.

3. Olives give us energy.

Credit the copper and iron that olives pack. Iron carries oxygen through our bloodstream to our brains and muscles, bolstering mental and physical performance and stamina. Enter copper, which helps the body absorb iron, so it can work its energy-boosting magic. One ounce of canned, ripe olives offers 5% of the iron our bodies need every day.

Olives are a decent source of calcium, which is critical for building and maintaining strong bones. Considering one ounce of canned olives offers 2% of the calcium we need in a day, olives are a good supporting character in a bone-healthy diet.

5. Olives’ biggest claim to fame is the antioxidants they contain.

They’re those unpronounceable plant compounds that protect our bodies from stress and disease, including inflammation, clogged arteries, cancer, and viruses. Olives do all those things, thanks to a long list of antioxidants, including the heavy hitter, oleuropein. Levels of oleuropein decrease as ripening advances but there are plenty of other impressive antioxidants to pick up the slack.

An ounce of olives (roughly 28 grams) has about 32 calories. Katherine also suggests avoiding eating olives straight out of the jar if you’re watching your salt intake.

As varied as their flavors and textures are, table olives all have one thing in common: they’re high in sodium. That’s because the critical curing process involves large amounts of salt to make them palatable off the tree. One ounce of ripe, canned olives has more than 240 milligrams (mgs) of sodium. That works out to 10% of what we should consume in a day, making olives more of a treat than something to eat in large quantities.“For people who don’t like a lot of sodium in their food, you can rinse them first in water,” Katherine says. “You can also soak them for a bit in water and it will lighten them a bit.”

(The American Heart Association recommends no more than 2,300 mgs a day and an ideal limit of no more than 1,500 mg per day for most adults.)

Truth is, there’s no nutritional difference between black and green olives, though typically the riper the olives, the fewer antioxidants they contain. Really, buying olives comes down to personal taste. There are dozens of good olives made for eating on their own, however.

Here are a few worth seeking out:

The most common store-bought olives are midnight black versions that come whole or sliced in cans. They’re notoriously bland, and have a wimpy texture — the result of being picked green and then exposed to oxygen to change their color. Their inky complexion is perfected with a chemical called ferrous gluconate (a type of iron added to the brine). Reserve them for pizza toppings and let the ensemble of ingredients pick up the slack of their milquetoast flavor.

Easily one of the most popular table olives, this purple-black Greek variety is substantial in size and has taught skin and flesh that separates easily from the pit. Their texture is meaty and smooth making them a favorite to eat straight up. They’re also stars as tapenade to spread on sandwiches or crostini.

These small brownish-green olives aren’t easy to find outside a bottle of oil but they’re a revelation when prepared well. The seed to flesh ratio is high, but their meat is dense and firm, making them a satisfying snack with a slightly bitter after taste.

These small black olives are essential if you’re making their namesake salad with tuna, green beans, hard-boiled eggs, potatoes, capers and butter lettuce. Niçoise olives are named for the French region where they grow and their curing method. They go by the name Cailletier or Taggiasca when used for oil.

These big beauties come from the cultivar Nocellara del Belice, and are one of Italy’s flagship snack olives. They have a mild, buttery flavor, which makes them a good introductory olive.

Most of us know these as the pimento-stuffed versions that are a staple in grocery store olive bars. This large green variety, whose name means apple in Spanish, has substantial flesh and a rich flavor. It’s most commonly cured in brine and served as-is in appetizer spreads.

These olives are native to Puglia, Italy. They’re small with purplish-brown flesh that’s either brine- or dry-cured. Gaetas boast a bright flavor that tends toward citrus, and are an easy addition to pasta dishes.

Neither George nor Katherine are big on waste, so if your olives come in a vinegar and oil brine, don’t dump it after that last olive has been eaten. They recommend throwing some oregano and garlic in the leftover liquid, and using it as salad dressing.