How to Pair Beer and Food Like a Cicerone 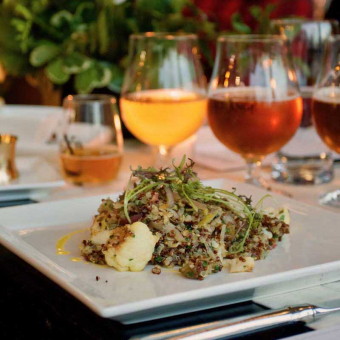 Pairing beer with food doesn't have to be stressful. Suds are forgiving but there are definitely ways to bring out the best on your plate and in your glass.

Few things pair better than a patio and beer.

But that hoppy, malty, yeasty elixir is more than a one-trick summer beverage. Beer, like wine, is a soul mate to food. Make the perfect match between dish and glass and it’s a little like the climax of Tchaikovsky’s 1812 Overture happening in your mouth. With cannons, to boot.

Something magical happens when flavours, be they complementary or contrasting, collide in a beer and food pairing. I was reminded of that recently at The Exchange Brewery in Niagara-on-the-Lake during a media dinner held to prove that point.

Good news is, you don’t have to be a cicerone to make the right beer and food pairings.

Here’s how to nail it.

Everybody has their favourites when it comes to cracking open a tall, cold one. But choosing which one to drink goes beyond deciding between craft and mass-produced suds.

There are three categories of beer: yeast-forward, like a saison or German Hefeweizen, which can be spicy and floral; malt-forward, like a porter or stout, with roasted notes brought on by the Maillard reaction; and hop-forward — think IPA, with its more aggressive, sometimes bitter notes.

With that in mind, think of similarities in the flavours of food and beer, Costa suggested. Porters and stouts work well with roasted mushrooms and meats — anything caramelized, really. Nuts and chocolate also shine when served with dark beer.

Hop-forward beers with their citrus notes can stand up to lemony fish or chicken, or something salty like goat cheese.

Meanwhile, yeasty beers with their dry body go well with summer barbecues and grains. Got a Hefeweizen? Of course it will work with quintessential German dishes like sausage and potato salad, and The Exchange makes the most German Hefeweizen I’ve tried on this side of Atlantic. It could stand up to any stein from overseas.

Other great matches: try trappist with its hints of fig, raisin and brandy with sticky toffee pudding; treat dry and light golden ales like a versatile and easy-going white table wine; and try white IPAs, which boast plenty of yeast alongside hops, with sushi.

Matches can also be made in heaven when the flavours play off each other. The funk and richness of blue cheese, for example, meets its match with the acidity and tartness of a sour beer. The contrasting flavours and mouth feels bring out the best in each other and provide incredible balance.

Sour beers are also great foils to sweet and rich desserts. Ditto for spicy foods. The mouth-puckering powers cut through any oiliness or fattiness, ensuring neither overwhelms.

Those trappists with burnt sugar, caramel notes create magic when paired with something salty.

Still, there are some opposites that don't attract, Costa warned. "Chocolate doesn't go with IPA. I don't know if it's the hoppiness but milk chocolate is particularly bad."

A red ale like this one pairs well with gruyere cheese and even everyday foods like sandwiches.

Reach for a lager. Costa assured it goes with anything, kind of a like a Riesling.

The key, though, is to not take pairing beer and food too seriously. Beer is more forgiving than wine, she noted. Even an IPA, which stands out for its hoppiness, can have malty and yeasty notes you can play with when pairing with supper.

"There are no mistakes," Costa said. "Beer is very versatile. It may bring out and accentuate flavours but you can't go wrong at all. At the end of the day, it's beer. It's great on its own and with food."