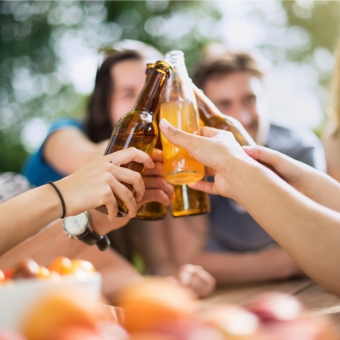 Niagara is no slouch when it comes to beer. These local brews will keep you cool this summer.

Others reach for a beer. Neither is wrong but three guesses who's having the better time.

Here are four local brews, available at the breweries or LCBO, to pour in a very frosty mug this summer.

Don't click away. This isn't your typical light beer.

Lagershed Lighter trumps all of its other low-alcohol cousins because it's full-bodied and lively rather than watery and bland. This beer has all those classic lager flavours, and boasts a crispness that counters the hottest of days. Better still, it comes in a 330-millilitre bottle. Someone somewhere put a lot of thought into the perfect packaging that fits beautifully in hand, and isn't a huge commitment to drink at 4.2 per cent alcohol.

Also try: Speaking of great packaging, the heads of Shawn & Ed in Dundas were thinking when they released the LagerShed Original in an unbreakable aluminum bottle that holds 473 millilitres for thirstier types.

If you're unsure about sours, rest assured this beauty isn't very sour at all. But it's dry and bright like the perfect summer day. This made-in-Beamsville brew pairs easily with some of my favourite summer fare, including hearty salads with a vinaigrette, or grilled vegetables, thanks to fresh orange notes. Use it in asparagus or pea risotto instead of your typical white wine and discover how versatile this brew is.

I love the creativity that goes into this collaboration between Small Batch Co. and Lock Street Brewery in Port Dalhousie. Brewmaster Jake Foster gets a new, fresh-pressed seasonal juice from Small Batch Co. each month and blends it with a different brew for a tap that changes every 30 days. A charcoal lemonade has played a supporting role to Lock Street's pilsner, as did pineapple juice with IPA. They're fun and easy, just as a radler — and summer — should be.

This makes the list because my inner German thinks few things scream summer like a cloudy Hefeweizen. Problem is, few Canadian craft breweries have mastered the art of the Hefeweizen until now. The Exchange's version could rival any of its German inspirations. It has hints of banana but isn't cloying like so many Canuck takes on this beer. It's ideal as a patio sipper or with a summer barbecue.

Also try: The Exchange in Niagara-on-the-Lake specializes in sour beers, and has proven itself a master of the funk. The Berliner Weisse, also available in cans, is an easy-drinking, dry sour that's light and refreshing.