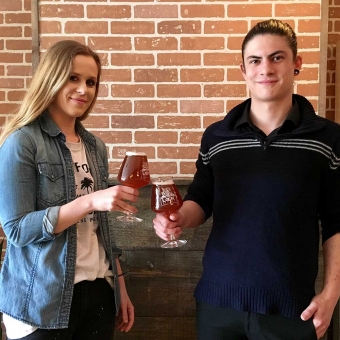 Lock Street Brewery in Port Dalhousie has teamed up with Small Batch Co. to make a series of radlers that use real fruit juice and unexpected flavours. This story originally ran as my column, Eating Niagara, in the St. Catharines Standard, Niagara Falls Review and Welland Tribune.

It's not because he needed a liquid Hail Mary to make up for sampling too many suds on the job. Foster, who makes beer at Lock Street Brewery in Port Dalhousie, simply wanted to ferment the next great local brew.

And Nicole Pajak, owner of Small Batch Co., makes the ideal fresh-pressed fruit, vegetable and herbal concoctions to help him to do that.

Since April, the two beverage businesses, which at a glance might seem at odds in their missions beyond quenching thirst, have collaborated to produce some of the most playful — perhaps even the most healthy — radlers in the region.

"I thought it was genius," Pajak said. "He was the first brewery to approach us and we were game."

Radlers are those German-invented elixirs consisting of a 50-50 mix of beer and fruit juice, usually lemonade. Similar to a shandy, it's what I first got drunk on sitting in a German beer garden with my dad when I was 16, and what the LCBO couldn't keep on the shelf a few years ago when Austrian brewery Stiegl started sending its Pilsner and grapefruit juice blends to North America.

The point is, radlers go down easy, especially on a hot summer day with drinkers who want to enjoy a lighter pint.

Foster knows this, and having a rotating roster of radlers was a priority for the young brewmaster. Critical to the success of his plan was finding a local source of fresh juice.

The great Google led him to Pajak and Small Batch Co., and soon the two squeezed out a plan. Their first creation was a Munich-style radler made with Small Batch Co.'s grapefruit, orange and lemon juice.

Foster called it The Bermuda Triangle but there was nothing ill-fated about it. People lapped it up.

The same thing happened last month when Foster added Pajak's Voodoo, a lemonade made inky black with activated charcoal, to a Lock Street cream ale to create the easy-drinking Dusk 'Til Dawn.

Aside from turning beverages an unexpected shade, activated charcoal is touted to make teeth whiter and, most fittingly, cure hangovers. Exactly what you need "if you were drinking last night but still felt like drinking today," Foster said.

"It's like the perfect hair of the dog," Pajak added with a smile.

There are several criteria that need to be met before the Lock Street-Small Batch Co. radlers become a reality. For starters, the end result always has to taste like beer, Foster said. In the case of June's mashup of IPA and pineapple juice, the hoppy, bitter pale ale foils the more syrupy tropical fruit nectar.

"I always ask Nicole what's available and what's in season," he explained. "I get the juice, bring it back to the brewery and let everyone try it with the different beers. We landed on IPA with this one because pineapple juice is very sweet."

The wheels are already turning for July's radler, which will likely star watermelon, Foster said.

Come fall and winter, when heavier beers are in season, he may tap Pajak for pulp left over from the juicing process, or even orange peels for a chocolate orange porter.

"He always comes out with amazing things," Pajak said. "It's cool to see where he goes with things."

So far, Foster has no plans for a Kale Kolsch, though he isn't dismissing the possibility of vegetables sharing a stein with one of his ales or lagers at some point.

Cucumber and carrot are both candidates.

"I'm very familiar with spinach. I'm not sure how it would translate in beer but it's something I want to experiment with before the end of summer," Foster said. "The complexity and subtle notes you can pull out are the fun and the drawing card of craft beer."