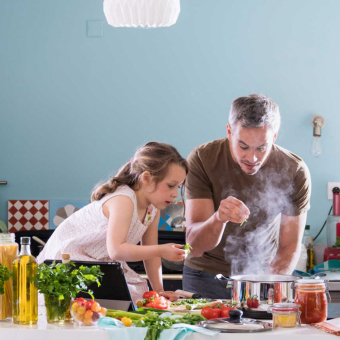 I originally wrote this story about learning to cook well to live well for Lifetime Daily. All images provided by Shutterstock.

It’s easy — almost justifiable — to head to the drive-thru or freezer section of the grocery store on days we’re so pressed for time that eating is relegated to little more than gleaning enough calories to power us through our next commitment.

That’s when we need to remind ourselves of one of author Michael Pollan’s food rules: “Eat only foods that have been cooked by humans.” It’s worth including the addendum “but especially by you.”

Pollan is best known for giving us the dining mantra “Eat food. Not too much. Mostly plants.” But the author of some of our generation’s most important books about food production and eating has offered plenty of other wisdom worth gobbling up, particularly in his 2009 zeitgeist “Food Rules: An Eater’s Manual.”

Pollan pointed to the salt, fat, sugar, preservatives and unpronounceable ingredients that corporations use in the food we so often turn to for a quick hit of sustenance. And though professional chefs are humans, they tend to favor salt, fat and sugar in their creations, too.

Why We Need to Get Back Into the Kitchen

Picking up the spatula ourselves bodes well for our health. Cooking gives us control over what we put in our bodies. Problem is, we’re making fewer and fewer meals ourselves.

According to The Dietary Guidelines for Americans (2015-2020), about two-thirds (67%) of the calories consumed by the U.S. population are purchased at a store, such as a grocery store or supermarket, and consumed in the home. However, Americans have increased the proportion of food they consume away from home from 18% in 1977-1978 to 33% in 2009-2010.

Getting back into the kitchen would help our cause immensely. It was Hippocrates, the physician after whom all modern-day doctors take the oath to do no harm, who said all disease begins in the gut. Clearly, it’s been known for ages that cooking well and living well aren’t mutually exclusive. It’s the ultimate self care.

But if the stats above tell us anything, it’s that people are forgoing health for easy meals that require little ability to get from store to plate. The joy of cooking is either elusive come dinner time, or the know-how is in short supply. To cook well, eat well, and ultimately live well doesn’t mean being well-versed in sous-vide cooking, but it does start with being comfortable in a kitchen.

Tips and Resources for Cooking at Home

The basics anyone needs to turn raw ingredients into a healthy meal can be found in several places. Community colleges that teach culinary arts typically offer short continuing education courses covering specific topics, such as knife skills, bread making, how to prepare soups and stews from scratch, and making your own pasta.

A visit to the local library branch can help, too. Libraries have ever-growing cookbook sections and many books are packed with information about kitchen and pantry basics in addition to recipes.

If finding time to get behind the burner is an issue, look for titles dedicated to ease and saving precious minutes. There’s no shortage of options that promise healthy meals in 30 minutes, made with only five ingredients, or done with minimal mess.

For more visual learners, a quick Google search will also lead to many online cooking tutorials. LEAFtv is an excellent online resource, offering tutorials for a range of cooking skills, including how to make an omelette and how to roast vegetables. The cooking skills range in difficulty but the goal is the same: empowering viewers, like you, to make a healthy snack or meal.