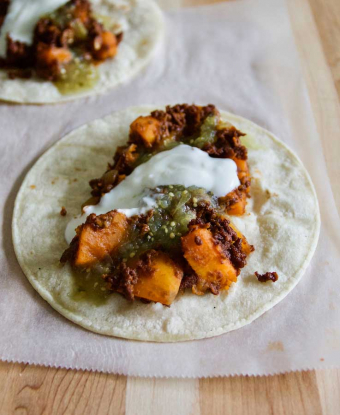 I have a few heads of garlic left, too, but I’m not really counting those because it’s always garlic season in my kitchen.

But there’s also snow on the ground and my parka remains in heavy rotation among my coats. I’m starting to wonder the point of clearing out my winter vegetables to make way for asparagus when I’m not sure asparagus season will ever happen.

By the way, it’s June in six weeks, and that’s supposed to be strawberry season.

Still, I press on in Operation Eat My Winter Vegetables to Make Room in the Crisper for Local Asparagus.

Tacos inspired by a recipe in Tacos, Tortas, and Tamales by Roberto Santibal have helped the process. This little book is a gem that I scored in a scratch and dent bin for $2 at my local independent bookseller. It’s not the most vegetarian-friendly but if my latest taco craving is any indication, it’s highly adaptable to plant-based modifications.

A few weeks ago I was plugging away at a story when my stomach demanded I stop putting off lunch. I didn’t hold out much hope as I walked over to the fridge. But like the bright stars of a constellation, three things appeared to me amid the bits and bobs: tortillas, which I always have on hand, a package of Tofurky vegan chorizo that I bought out of curiosity, and sweet potatoes.

I consulted Santibal’s book and found the spark I needed to make a lunch that’s repeated as a family favourite dinner. It’s also made quick work of my sweet potato stash.  It was a recipe for potato and chorizo tacos easily modified for what I had on hand, including some dried jalapeños I made from last summer’s CSA haul.

The real trick is getting the vegan chorizo to have enough crispy bits to be toothsome instead of mushy, and for that a well-seasoned cast-iron pan is essential. There’s a lot of scraping required to prevent burning. A smooth, shiny surface keeps the chorizo from sticking and charring — not something Santibal had to worry about with his fattier meaty version.

Flax oil is essential for a good season when you’re doing a major overhaul of your cast iron. I resort to the Kaufman Mercantile method for in-between upkeep.

Now on to tackling those squash…

These sweet potato and vegan chorizo tacos are a modified, veggified version of a potato and chorizo taco recipe found on page 39 of Roberto Santibal's Tacos, Tortas, and Tamales.

Heat a cast-iron or heavy-bottomed skillet over medium heat. Add oil, onions and crushed jalapeño. Cook for two minutes until onions start to soften. Add the vegan chorizo and spread evenly the pan. Using a wooden spoon, stir and scrape the vegan chorizo infrequently to allow for browning. Watch carefully though to ensure the mixture doesn't burn the longer it's in the pan. Browning should take about 15 minutes. (If you find your chorizo is sticking, add a splash of water to de-glaze and loosen the brown bits.)

Serve with warm tortillas and top with goat yogurt or vegan sour cream, salsa and garnish with cilantro.

I didn't have fresh jalapeño or serrano peppers as Santibal called for in the original recipe. So in keeping with the theme of using up what I had on hand, I broke apart a dried jalapeño with a mortar a pestle and used that instead. It adds a wonderful layer of heat but if you prefer to use fresh, Santibal calls for 1 tablespoon, finely chopped.

I used Tofurky vegan chorizo but your favourite brand should suffice and give similar results.