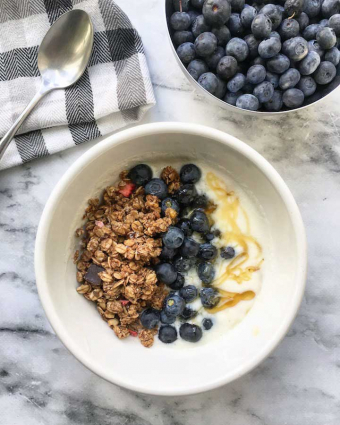 This post is sponsored by Vivo Cultures. What does that mean? Vivo Cultures provided me with yogurt starters to try making yogurt at home. I was not compensated financially for this review, nor did Vivo Cultures have input into the writing of this post.

I’ll never forget the night I cried over spilled milk. It was Summer 2007 — a scorcher of season whose mercury peaks felt that much more severe in my air-conditionless apartment.

I was trying to abide by the 100-Mile Diet, which was coming into its own and birthing words like locavore. My job was to write about my local food finds each week for the local paper. There weren’t many back then beyond a loaf of bread and my CSA basket. But it was up to me to try the locavore lifestyle and determine if it was realistic to eat foods from within only 100 miles of here. (Spoiler alert: It’s not if you like coffee, chocolate, bananas and citrus.)

My vegetarian diet didn’t help. If anything, it made my assignment 11 years ago one with all the makings of a major health crisis for the lack of protein.

Sure I had eggs from a farmer friend. And I played fast and loose with the dairy rules, buying goat’s milk from Hewitt’s Dairy in Hagersville. It was within 100 miles of St. Catharines but I didn’t ask whether Hewitt’s suppliers were just as close to home. Ignorance was protein and calcium-filled bliss.

Still, the protein pickings were slim, so someone suggested I make yogurt, just for a change of texture if nothing else.

I was hungry and that made me keen to try. All I needed was a starter. Just a scoop of store-bought yogurt and I was on my way DIY locavore glory.

Vivo Cultures is a brand of starters you can use to make yogurt safely and successfully at home.

That, however, was the stumbling block. It wasn’t a question of how far my yogurt starter travelled to reach me. I was prepared to cheat and plead ignorance or near starvation in my next column.

Problem is, I can’t have cow dairy and at that time, I had yet to find goat yogurt anywhere. So I dug out an aging bottle of probiotics from the darkest corner of my fridge and put my faith in the powdery contents of a few capsules. After all, my fridge was within that 100-mile radius and those pills had been in there for so long, they were naturalized Niagarans.

That stirred into a litre of goat’s milk and set in a warm oven overnight with the door slightly ajar held the promise of freshly fermented protein, according to the directions I was given. I dreamt of my body absorbing all the nutrients it had been deprived of the previous few weeks.

Instead, I woke up to Suzy Homemaker’s nightmare. There was no yogurt, only a big bowl of curdled milk that tasted of barnyard and kicked my gag reflex into overdrive.

Disappointed, I marched to the grocery store in search of the plainest, most organic cow yogurt from the least far-flung supplier that I could find with the hope of rescuing my DIY version. Allergies and food safety be damned, I was willing to chance it, only to notice the lineup of Hewitt’s goat yogurt next to the tubs adorned with smiling cows (mocking me, no doubt) when I got to the grocery store.

From that moment on, I vowed making yogurt was a waste of time, effort and milk.

But time heals all wounds, and dries all tears. So when Vivo Cultures reached out to me about trying their yogurt starter cultures to make my own yogurt at home, I listened. And I said yes.

Vivo Cultures offers five kinds of starters, including for kids, weight loss, to boost immunity and to make kefir. All are gluten-free and promise to contain no GMO ingredients.

My yogurt made with Vivo Cultures held up against my berries and granola.

The instructions in each pack, and the video tutorial are simple to follow. Even better, I could use whatever high-protein milk I wanted to make my concoction.

So with a carton of soy milk in hand, a sterilized pot and a new food thermometer to heat my milk to 40°C (104°F), I somewhat skeptically set about making yogurt. (Hey, a failed yogurt maker never forgets.)

The process was simple and safe: heat milk on stovetop, stir in starter, cover pot and wrap in a towel, and leave for up to 24 hours. I was able to email Ukraine-based Vivo Culutres, which has a Toronto branch, with any questions during the process to make sure my milk was fermenting as it should.

Because I was using soy milk, I was told it may take a little longer to ferment than other milks. I left it for 21 hours and when I pulled the lid off, it smelled like yogurt and was thicker than the soy milk I started with.

The results were a dairy-free yogurt with a smoother consistency than any of the mass market versions I’ve bought at the supermarket. The Vivo Cultures yogurt wasn’t as thick as ready-made yogurt, but it did hold its own against my granola and berries. It also had only two ingredients: milk and starter culture. That’s a solid reason to consider making yogurt at home. Look at the ingredient list of some mass market brands and you’ll understand what I mean.

The one drawback: a 1.89-litre carton of soy milk makes a lot of yogurt and I’m the only one who eats non-dairy yogurt in my home. One bottle of starter (you get two in a package) works with one to three litres of milk, so if your family eats a lot of the stuff, then you’re set, but next time, I’ll make less. Also, at $3.99 to $4.49 per culture, it cost me only $8 for nearly two litres of yogurt. That’s a bargain.

So there was no crying over spilled milk this time; just a happy dance that I finally succeeded at making homemade yogurt.