Eating at Home with Voula Halliday 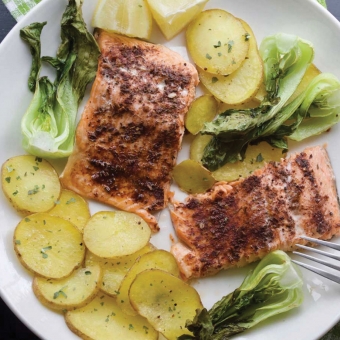 Voula Halliday doesn’t take the thinking out of mealtime entirely but her new cookbook, Eat at Home, does show it’s not impossible to eat well.

The name of Voula Halliday’s cookbook has been a bit of a running joke in her family.

Eat at Home is an homage to eating simple meals, made, well, at home with pantry and fridge staples. But admittedly, there was a lot of takeout consumed in the three years it took Halliday, a Cordon Bleu-trained chef, to write and publish her debut collection of reliable recipes.

That was difficult for her to admit, however. Still, she did, coming clean in the introduction of Eat at Home about the habit Halliday — and so many of us — develop of phoning in supper by calling for delivery.

It was a nearly nightly affair; one that took the stress out of figuring out what to cook her family of three at the end of a long work day. But it came at a cost far greater than the bill stapled to every bag full of ready-to-eat food that arrived at Halliday’s front door.

“It was me losing control of a part of my life,” Halliday said.

Control over ingredients and how they’re cooked, and eventually control over her health. Yet Halliday held fast to the notion that no one should ever compromise on how they fuel their bodies.

“We’ve all been there and of course we’re going to rely on shortcuts. But I don’t want that to be my go-to. I wanted to take a realistic look,” she said. “I’m a Cordon Bleu-trained chef. I could do a lot of “chefy” cooking on the weekend … but I want to cook real food on weekdays; dishes that aren’t fussy. And, I want leftovers that I can use in lunches through the week. I really wanted to take back control.”

She did, and she’s offered us the step-by-step for doing the same in Eat at Home, released last fall.

Eat at Home is 300 pages of breakfasts, soups, salads, mains, sides and desserts made with ingredients Halliday said are as easy to find at the farmers market as they are at the corner store.

At first glance, the chapters might read like a standard table of contents for a cookbook. A closer look reveals much that sets Eat at Home apart from others trying to sell us on the virtues of a home-cooked meal.

Take the chapter called Flavour Fixes. It’s a collection of spice mixes — dry rubs and pastes — that appear regularly in recipes throughout the book. Each one makes about a cup of a flavour booster, like Halliday’s Very Special S & C Seasoning from her days as the food guru with the megawatt smile on CBC’s Steven and Chris.

“Now you’ve got something available to you to easily top vegetables with, tofu with, chicken with. The problem of how to make something simple taste great is now taken care of by one jar of seasoning blend,” Halliday explained. “Once you get into using Flavour Fixes you’ll find it easier to add them to other dishes from your own collection of recipes for an instant flavour boost. I feel like that’s a game changer for many people.”

So, too, are the recipes with the little red hearts on them like the Creamy Club Risotto. They signal recipes made with Loveable Leftovers, a concept Halliday coined during her days on Steven and Chris. In the case of the risotto, it’s made with leftover roast chicken.

“If we’re going to roast chicken for dinner, we throw in extra pieces and once cooked we slice them and store in the refrigerator; ready to go into lunches during the week,” she said.

With some black beans, veggies, a spice blend and olive oil, she added, “boom, boom, that’s an awesome salad (for my daughter). The time it takes me to go and buy expensive convenience food is more or less the same time as it will take me to plan for leftovers. I’ll buy chicken and vegetables that are easy to cook. I’ll combine leftovers with fresh ingredients and make something that is fuss-free and delicious.”

It’s not exotic, nor is it meant to be. Halliday isn’t trying to challenge us with hard-to-find and harder-to-pronounce ingredients. She simply wants us to make and eat meals that nourish and bring joy, no matter our skill set in the kitchen.

She wants dinner — or lunch or breakfast — to be accessible. So if you use soy or nut milk instead of cow’s milk, you can easily swap one for the other in her recipes calling for dairy. Halliday tested all the modifications she could imagine, and includes many in her recipe notes to provide as much inspiration as possible.

She doesn’t take the thinking out of mealtime entirely but she does show it’s not impossible to eat well.

“It’s like I was putting up all these barriers in front of me and saying ‘No, that’s not going to be a problem.’ And in doing that, I made the recipes accessible to everyone. All these things I do, and I do them to live life easier.”

Labels are also scarce in Eat at Home. Raw food recipes, for example, aren’t dubbed as such so those who don’t mind their food meeting a flame aren’t put off trying recipes like the Thai vegetable noodle salad made with spiralized or julienned zucchini and carrots instead of cooked carbs.

“Food should never be limiting or restricting,” Halliday said. “It’s an accessibility thing. It’s cost effective. I want people to nourish without thinking there are rigid rules you have to follow.”

Even though the ink is barely dry on Eat at Home, Halliday is already thinking about the two books that will follow it. Eat at Home was published under Halliday’s own imprint, Cast Iron Press, and done with the help of Kickstarter fundraising campaign to cover the $12,500 printing bill, and serve as the book’s launch.

Response went over and above Halliday’s original ask, only confirming for her that people are as keen to breakup with the delivery guy and eat at home as she was.

“People are cooking from the book and really enjoying it. I’ve had nothing but positive feedback about Eat at Home,” she said. “Is there anything I would change? No, I wouldn’t.”

This easy rub is great on any slow-braised or grilled meats. Try it on salmon or trout to wake up your taste buds.

Reprinted with permission from Eat at Home by Voula Halliday, copyright 2017.

Combine all ingredients in a bowl.