Fire Cider for All that Ails You 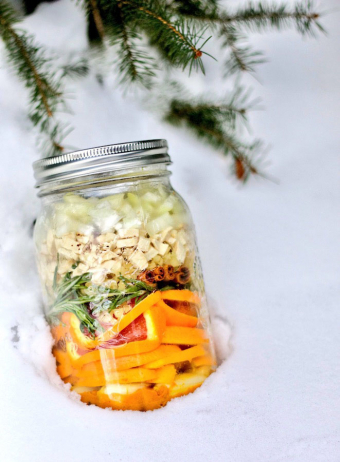 Fire cider is a pungent folk remedy used to boost immunity, fight illness and make us feel warm in the winter. Here's how to make it.

If I were one for resolutions, I might resolve to not get sick in 2018.

I live with a nearly four-year-old, however, so I know that I’d be setting myself up for failure if I did that. Instead, I’ll optimistically make fire cider, a folk remedy for all that ails you during cold and flu season, and keep my fingers crossed.

I first learned about this witch’s brew of wince-inducing ingredients a few years ago when I got a copy of the Kaufmann Mercantile’s How to Split Wood. It’s an understatement to say I was intrigued.

I was also confused. Why would anyone put horseradish, jalapeños, ginger, turmeric, rosemary, garlic and citrus in a jar with cider vinegar and drink it? It sounded wretched, like the treehugger version of Buckley’s cough syrup.

It tastes awful — but who knew in this case if it would work.

Kaufmann Mercantile can sell almost anything. Still, it didn't sell me on enduring even a drop of fire cider, no matter how much KM touted it as an immunity-boosting, antiviral elixir.

But fast forward to my third winter as a mom, my third winter of illnesses that like to linger — lather, rinse, and repeat — and I’m willing to try anything to stay healthy.

I was reminded of this brutal concoction the other week when I came across a recipe for a fire cider hot toddy on Kristy Gardiner’s site (she calls fire cider “a punch in the face”) and I resolved that I would finally make some. I was game for some preventive medicine after three weeks of a cough that caused my whole body to convulse, and a round of some of the strongest antibiotics money can buy.

It really struck me that I needed a different tack when my pharmacist pointed out I was on the same drugs this time last year.

“It’s how I like to start every new year,” I half-joked as I paid for my pills.

He half-smiled, probably thinking about the antibiotic resistance developing within me.

A Homemade Cold and Flu Solution

So here I am, with a jar of fire cider brewing on my countertop, hoping for the best. I haven’t resolved to not get sick (I remember who live with). But be it resolved, I’ll clearly try anything to avoid it.

Fire cider is a folk remedy used during cold and flu season to promote health and warmth.

The recipe I used was a mashup between the one on Kristy’s site and the Kaufmann Mercantile version with some tweaks by me. I added cinnamon sticks and  precisely counted out peppercorns. I used less turmeric and ginger because I didn't have the amounts in either recipe. My fire cider also has smashed garlic  instead of chopped and measured cloves.

Fire cider's beauty is that you can vary the instructions without getting burned. Don’t have rosemary? Use thyme or oregano. No cinnamon sticks? Ground cinnamon works. No jalapeños or cayenne? Another hot pepper, fresh or dried, will suffice. Maybe you’d like to put tamarind in your fire cider, rose hips or more orange and lemon. Do it. And feel better.

Or brutalize your taste buds. One of the two.

Folk medicine traditions have all kinds of ideas about how to stay healthy during cold and flu season. Fire cider is one of them. At one time, those brave enough to consume fire cider buried their jar underground to control the temperature during fermentation and to extract as much goodness from the ingredients as possible. A root cellar or dark corner in the kitchen, away from the oven, should do the trick.

The beauty of fire cider is that it can easily be made with staples we keep on hand in our fruit bowl, pantry, and fridge at this time of year. This recipe is a mix of Kaufmann Mercantile's and Kristy Gardiner's with a few modifications of my own.

Prepare all the citrus, vegetables, herbs and spices, and place in a sterilized one-litre (quart) mason jar. (I chose to layer each ingredient neatly but don't feel you have to).

Cover with cider vinegar, preferrably organic, but whatever you have on hand will work. You'll need at least two cups but have extra handy in case you need a bit more. Leave 1.5 centimetres (half an inch) of headspace but ensure everything is submerged.

Cover jar with a non-reactive lid or as Kaufmann Mercantile recommends, place parchement or wax paper under the lid to prevent the vinegar from causing it to corrode.

Store the mixture in a cool, dark place for one month, giving it a good shake each day.

After one month, strain the liquid, removing as much of it as possible fron      mm the vegetables, citrus and herbs, and store in a clean jar.

Your garlic will turn blue-green as it soaks in vinegar. Don't be weireded out by this. It's the sulphur in the garlic reacting with the acid of the vinegar. It's still perfectly safe to consume.

KM warns the antibiotic properties could kill any good bacteria that grew over the past month of fermentation. Honey's natural sugars could also favour any natural yeasts and cause the fermentation to turn boozy.