The Hands that Feed Us: Thanking a Farm Worker

Posted Dec 26th, 2017 in Eating Niagara, On the Farm, The Hands That Feed Us, Food Stories 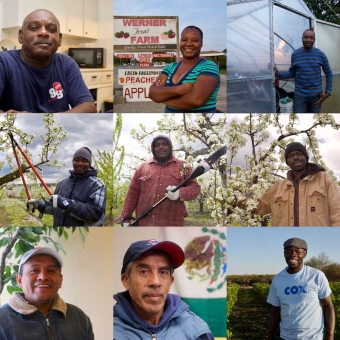 My in was that I wouldn’t ask any difficult questions.

I wasn’t looking for dirt. I just wanted to hear their stories, learn who they are. What do they do for fun? What’s the first thing they do when they get home?

We often hear the horror stories of seasonal agricultural workers who are mistreated by their employers but they’re often told without specifics. No names are used — of the workers treated poorly, for their protection, or the farmers abusing their privileges as an employer.

Those stories need to be reported. But there lies danger when those are the only stories we hear about workers, and it’s impossible to hold anyone accountable because of the need for anonymity. It ultimately paints migrant workers as victims and farmers as evil task masters.

And sadly, the bad employers carry on with no consequence, and give good employers — which most farmers are — an awful name.

So to get people to open up for my Hands that Feed Us series, which profiled a different worker each month of the 2017 growing season, I promised I wouldn’t ask specifically about mistreatment.

I wanted readers to see who these men and women are: people who make great sacrifices — they miss birthdays, graduations, and anniversaries — to do work we don’t want to, and the local economy keeps working as it should.

They’re people with families, and talents beyond the manual labour they put into tending our orchards, vineyards or greenhouses, and harvesting crops for us to eat.

But stories still came out when I set down my pen, though everyone I interviewed only had positive comments about their employers.

Read the rest of the series »