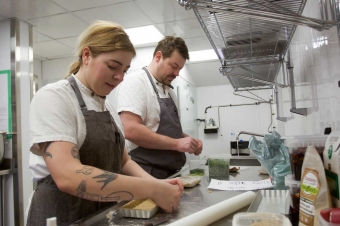 The Restaurant at Pearl Morissette played host to a Michelin on the Road dinner in December 2017, suggesting Canada is making inroads with the Michelin Guide. I originally wrote this story The Hamilton Spectator.

Buried deep in the Michelin Guide Instagram feed is a shot you’d expect from the most influential restaurant ranking and review body in the world.

It’s a photo of roasted Muscovy duck with a glaze of persimmon and prickly ash alongside grilled mustard greens and irina mushrooms. All of it is artfully styled on a spare white plate.

It’s not the subject that stands out most, though. After all, the Michelin Guide’s Instagram catalogue is a visual feast of stunning dishes from restaurants anointed with a hype-inducing Michelin star — or two or three.

The post was a promotion for last Friday’s (Dec. 8) Michelin on the Road dinner; a one-off event that brought Anna and David Posey, a wife-husband team of chefs from the newly starred Elske Restaurant in Chicago, to cook with Pearl Morissette co-chefs Eric Robertson and Daniel Hadida.

Event sponsors say the 30 seats sold within minutes of going on sale. But more than a dinner that brings Michelin star chefs to communities “where the Michelin Guide doesn’t yet exist,” it’s a signal that the world’s most trusted dining authority is finally paying attention to Canada’s culinary scene. And more specifically, to a restaurant that’s a short drive down the QEW from Hamilton.

“What the intent is, without saying it, is Michelin intends to come to Canada but they’re not saying it,” said Jennifer Semley Robert, marketing manager for Nestlé Waters, whose San Pellegrino brand was a presenting partner of the Michelin on the Road dinner at Pearl Morissette. “Basically, what it tells me is when a Michelin dinner is held there, this is a restaurant that’s going to be sought after. We’ve heard a lot about the culinary scene in Canada … and this will help Canada on global scale.”

It’s no secret Michelin, with its power to catapult chefs to global fame, has ignored Canada. No one north of the 49th has ever been given a star, which means there’s never been a Michelin Guide dedicated to Canadian restaurants. That could be due to the mighty Michelin Man never sending inspectors here to see what our chefs are cooking.

Last year, Michelin started dropping hints that our culinarians weren’t spinning their wheels, going unrecognized for their efforts. In October 2016, Canada’s first Michelin on the Road dinner happened at Toronto’s Alo Restaurant, a fine-dining spot that landed at the top of Canada’s 100 Best list this year.

Hadida, who was already at Pearl Morissette with plans to do dinners with chefs from around the world, helped that night in the kitchen at Alo. He kept in contact with event organizers, lending his skills at subsequent Michelin events, too.

Plans were simmering for a followup dinner this fall when Hadida made an off-the-cuff remark to organizers about the “vanguard” Toronto restaurant chosen to play host. Three weeks before the event — and two weeks after opening The Restaurant at Pearl Morissette — Hadida and Robertson got the gig instead.

“It was, ‘Oh s---, I guess, we’re doing it,’” Hadida said. “(They) said it was good to do something at the winery because in the spirit of Michelin, it was somewhere off the beaten path.”

The Poseys, from Chicago, seemed like a good match for a collaboration. Michelin had just released its guide for the Windy City and they were in it with one star for their year-old endeavour. Bon Appétit ranked the Danish-inspired Elske No. 2 on its annual list of best American restaurants. Pearl Morissette wines make an appearance on Elske’s wine menu.

And though the Poseys’ use of truffles and foie gras on Dec. 8 was “a departure” from Pearl Morissette’s regional, seasonal focus, the chefs’ styles of cooking aligned.

“For them, it was a pretty quick yes, which is great for them because if someone asked me to go into another country to work with a kitchen I don’t know and media I don’t know, especially in a five-week-old kitchen … they were super generous about that and super calm through the whole thing,” said Hadida.

So were he and Robertson. The morning before the dinner, Robertson, who lives in Hamilton, arrived at his usual time of 8 a.m. to start making bread. Hadida rolled in at 10 and, by 10:30, Robertson had moved on to making duck sausage for something else entirely while his co-chef shelled mussels to use that night and later.

That evening as diners, most of them from out of town, took their seats, the seven bodies in the Pearl Morissette kitchen moved like a flawlessly choreographed ballet. Robertson kept tabs at the pass with the measured calm of a guru while Hadida moved skilfully be- tween plating, serving, and washing dishes.

No one from Pearl Morissette seemed fazed about this being a Michelin dinner, or by the implications of being on the guide’s radar.

Both Hadida and Robertson worked in Michelin-starred kitchens in Europe. Hadida logged time at the one-star Septime in Paris while Robertson worked at Belgium’s single-starred In de Wulf. That Friday, they insisted, was just business as usual.

“This is not anxiety-inducing,” said Hadida. “We all know the work involved. We’re used to working at a Michelin level and we try to work at that level always.”

But not because anyone is shooting for a star.

“We certainly don’t work toward that kind of thing. But we work at a high level to ensure everyone who comes into the restaurant has a really good time,” added Hadida. “I don’t really care, genuinely. In places I’ve lived, there have been Michelin star restaurants and it’s never been, ‘I’m going to eat at that restaurant because it’s a Michelin restaurant.’”

Even the Poseys, who existed in a Michelin-star-studded world at Chicago’s famed Blackbird before opening Elske, weren’t counting on Michelin’s approval to succeed.

“Before you get it, you try not to worry about it,” said Anna. “You do it for yourselves.”

“I’ve always looked at it as a goal but not an end point,” added David. “It’s validation we’ve been doing everything right. We’ve been making the right decisions.”

The results of a star can be a dreamy uptick in business, with reservations booked months in advance. But it’s hype that Hadida doesn’t want.

Despite Dec. 8’s dinner selling out quickly, making Pearl Morissette a culinary destination is a marathon, not a starlit sprint.

“I think the restaurant fits the model of what Michelin is based on,” said Hadida. “A Michelin star … or a good rating in the newspaper is great but it lasts a month to a year. Our focus is on keeping people coming for 10 years, 15 years, or longer.”