How to Make Potato Latkes that Geshmak 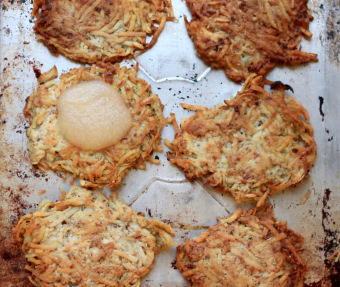 Potato latkes are a staple of Hanukkah or any time the craving for something hearty and deep-fried kicks in. Here's how to make potato latkes that geshmak. This story originally appeared in Niagara Life Magazine.

Potatoes have never been in the running for a ‘Superfood’ crown.

But what the knobby and dimpled tuber lacks in flash, it makes up for in substance. There are few vegetables as versatile and dependable as the potato. We always seem to have them on hand in our pantries to fry, scallop, mash or roast and play a supporting role to whatever else is on our plates.

Introduce a potato to a box grater, though, and something magical happens. Suddenly this side dish vegetable is elevated to superstar, if not superfood, status as the potato latke.

The fried potato pancakes served by Ashkenazi Jews on Hanukkah are deeply satisfying comfort food, and for anyone of Eastern European heritage, a staple of family meals.

Cardiologists might cringe at the idea of shredded potatoes pressed together and cooked partially or fully-submerged in oil, depending on one’s preference. Then there’s the whole apple sauce vs. sour cream debate when it comes to the proper accompaniments. Three guesses which one your good doctor would rather you choose.

Whatever. Just lean on one of those superfoods as a dietary mea culpa. A good potato latke slathered in apple sauce or sour cream may just be cancelled out by a side kale salad, if need be.

Here’s how to make potato latkes that geshmak

Making great latkes starts with a good potato, the starchier the better. All that starch helps the shredded potato hold together, so a good russet will do.

A good latke has to be fried. However, oil and water don’t mix, and not every potato was created equal when it comes to moisture content. To keep latke-cooking safe and less messy, squeeze grated potatoes (and the mandatory onions that go in your latkes) to remove excess moisture. You can also wring them out in a clean, lint-free kitchen towel or cheese cloth.

To submerge or not to submerge

Submerging or deep-frying a potato latke will certainly make it cook faster than those that are partially submerged in oil and need flipping. Use the proper cooking vessel whichever your preference. A heavy-bottomed skillet, like a cast iron pan, will heat oil evenly and is suitable for partially submerging. Use a heavy-bottomed pot or something with deep sides if you go all the way and deep-fry. Heat oil to between 325°F-375°F (165°C-190°C) to sear latkes, ensuring they come out light and crispy, and to prevent them from absorbing too much oil.

Mild-tasting cooking oils with high smoke points, such as sunflower, safflower, canola and peanut, are best.

Latkes for the long-haul

Cook latkes in batches. Crowding your pan will lower the temperature of your oil so limit it to three or four latkes at a time. Line a baking sheet with paper towels and set cooked latkes on it in a single layer while working through the batter. Keep cooked potato latkes warm in a low-temperature oven until ready to eat. You can also reheat leftover latkes in an oven set to 400°F (200°C). Cook until they regain their crispness and are warmed through.

Ready to make potato latkes for yourself? Try my recipe for four-vegetable latkes.