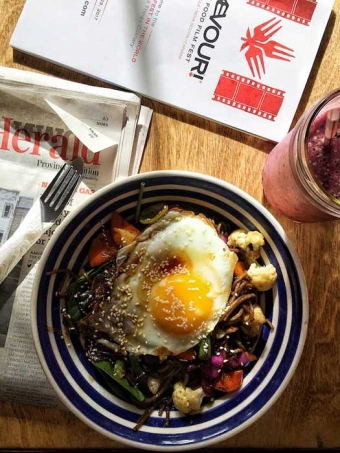 It took travelling to Wolfville, N.S., to realize that I don't spend enough time in front of the right kind of screen.

Two days at the recent Devour: The Food Film Fest, set in a region that's Nova Scotia's Niagara for its orchards and wine, was my reminder that film is the ultimate story-telling medium (grateful as I am that you're reading this online or in print right now).

When done right, film combines stunning visuals and powerful narratives that can leave us feeling entertained, inspired, pensive or even a little unsettled.

Throw food on the big screen — like at this annual festival — and those feelings are often more pronounced.

We eat with our eyes as much as our mouths. So food on film seems a natural mix, like salt and pepper, or Pépin and Child.

Speaking of legendary combos, dinner and a movie was once a marquee event.

Now that Hamilton's restaurant scene has exploded like the special effects in a Bruce Willis flick — there were none of those at Devour — it's time to revive this night-out ritual.

Here are a few of the must-see films screened at the world's largest food film fest that pair well with Hamilton's food purveyors.

Aube Giroux showed us the magic she can work with a camera in her Kitchen Vignettes, a series of picture-perfect food videos originally created for her farm-to-table vlog but later picked up by PBS.

"Modified" is her first full-length documentary, 10 years in the making. It's both a touching homage to her mother, Jali, the ultimate social activist who saved seeds and grew her own food, and an alarming look at the realities of genetically engineered food or GMOs.

Both mother and daughter became obsessed with GMOs in the mid-1990s when they were introduced to the marketplace in Canada. They worried about the business of GMOs and the lax regulations around their safety. They questioned their effectiveness at feeding the world and reducing pesticide use, as Monsanto and those of its ilk promised.

Though most GMO crops are grown for animal feed, 70 per cent of processed foods on the market contain genetically engineered ingredients that have been created by inserting the genes from one organism into another.

The proverbial bottom line agreed on by Canadian and American scientists, farmers and legal experts interviewed for this film is that GMOs have failed to do what they've promised. And as Giroux found out, Health Canada isn't talking about any of it.

As one scientist interviewed said about the safety of GMOs, "I wouldn't be surprised if something came up somewhere along the line that we hadn't anticipated."

Another questioned the ethics of GMOs. Take the insertion of pig genes into tomatoes. One mused if you're Jewish and don't eat pork, would you eat such a tomato? Without labelling, you might not have a choice.

Watch this movie then go for a nosh at the Westdale Delicatessen for your favourite Jewish fare. Head to William Dam Seeds in Dundas for dessert and start planning next year's garden.

This riveting documentary tells the stories of three coastal fishing communities in Newfoundland, Ireland and Norway through small fishers grappling with the effects of factory fishing and oil exploration in the North Atlantic.

Atlantic shows how each community and nation has dealt with declining fish stocks and interest in the black gold buried deep beneath the sea.

The loss of sovereignty in a global economy and the incredible disrespect of factory fishing and deep-water oil exploration on ocean ecosystems are nothing short of alarming, as Atlantic so eloquently articulates.

After taking in Atlantic, head to FSH & CHP on King William for a sustainably-sourced cod fish dinner, and enjoy it while you can.

Me and Jacques Pépin at Devour Food Film Festival.

Jacques Pépin: The Art of Craft

Jacques Pépin is arguably the greatest contemporary French chef. This documentary charts the course of his career, starting when he was 13. At 81, he's still cooking and encouraging others to do the same in his honest and humble way.

Pépin has cooked for heads of state, including Charles de Gaulle. The Kennedys wanted him as their very own during the Camelot era at the White House. But he chose upping the food game at Howard Johnson hotels in the U.S. instead.

He's most known to food and cooking aficionados for his influential, recipe-less cookbooks, La Technique and La Méthode. He was also the dashing foil to Julia Child in their PBS series, "Cooking at Home," who could — and still can — debone a chicken in under two minutes.

But he might be most known for his omelette-making magic. As Anthony Bourdain says in the film's opening scenes, if you're going to have sex with someone, you need to make them an omelette of Jacques Pépin standards in the morning.

If you're not quite there yet with your egg cooking skills, watch this inspiring flick and hit up Papa Leo's Restaurant on Concession Street where brownie — or omelette — points abound.

At once entirely unsettling and slow-moving like a growing season, this fictional account of teen love is rooted in the harsh realities of the migrant labour agriculture throughout the world relies on to operate.

Fifteen-year-old Wojtek travels from Poland to Sweden with his parents to pick strawberries for a local farmer. He and the farmer's daughter form a connection that highlights the tenuous relationship between farmers and the foreign workers needed to do the back-breaking, tedious work that locals eschew.

The film draws unnerving attention to the lack of rights and the vulnerabilities of farm workers, along with deep cultural divides between employer and employee. It's not unlike the real-life storylines that migrant worker advocacy groups in Canada share about the people harvesting fruits and vegetables grown here.

Wojtek's family holds out hope that his fate will be different than their own. But after one summer on the farm, we watch as opportunities fade, culminating in a violent standoff between workers and farmers.

Comfort food is required after watching this one. Knock on the window at Alicia's Kitchen and Catering in Stoney Creek and treat yourself to a giant order of handmade pierogis.

The best wine has a story to tell. Priorat is one of the oldest stories in the wine world but it hasn't been told well until now.

Priorat is a Catalonian county where wine has been made since the 12th century. The industry was devastated by phylloxera, a grapevine louse, at the end of the 19th century, causing economic ruin and people to leave in droves.

But in 1979, a quintet of hippies arrived with the goal of making wine better than France. Over decades, they reversed Priorat's fortunes as a difficult place to grow grapes to being one of the most vibrant wine regions in the world. When once there were only four wineries here, there are now 200 brands of wine from Priorat that have set the standard for Spanish tipple.

This is a story of tenacity and hope. It's about toughing it out when no one else shares your vision. And it reminds me a little of downtown Hamilton before its revitalization, and now as one of the Golden Horseshoe's most dynamic destinations.

For that reason, this movie pairs well with Capri Ristorante Italiano, a longtime pizza and pasta joint that hung on downtown through it all. Eat in Capri's Blue Grotto for a real sense of reaping the rewards of believing in something when others didn't.

If sipping Priorat is what you're really after, then head to Brux House on Locke Street South to enjoy a bottle of the 2014 vintage.

Some call Wendell Berry a poet. He did have a melodic way with his words, after all.

Others call him a social activist and environmentalist. None would be wrong. But he was also a farmer who foretold of the devastation that large-scale, industrial agriculture would have on the environment and once-thriving rural economies.

If you're a fan of words and David and Goliath-type battles, this movie is salve for the soul. It mixes Berry's writing and wisdom with the story of his fight against the agricultural policies of Earl Butz, the secretary of agriculture under U.S. president Richard Nixon. Butz favoured corporate farming, and the idea of getting big or getting out.

Combining interviews with farmers who have subscribed to Butz's business model, and others who took their cues from Berry, this movie is a thought-provoking look at the effects of our modern-day food systems.

Forget restaurants for this one. Head to your nearest farmers market or roadside stand, or sign up for a share with Plan B Organic Farms. Then pack yourself a picnic, and park yourself in your favourite conservation area, or next to one of Hamilton's many waterfalls, and dig in.