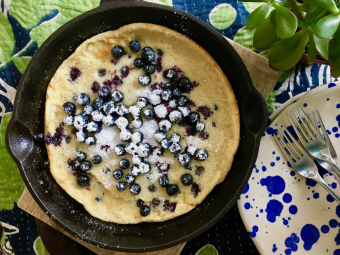 Blueberry Dutch baby is so super quick and easy, it's bound to become a breakfast or brunch staple. Think of it as pancakes made even easier.

I'm not a fan of technology at the moment.

There’s major frustration percolating as I type and it’s because of technology. Mostly this website.

It’s broken. You’ll notice posts without photos as you click through things. Sorry about that. Everything will be fixed and back to normal eventually, I hope. It’s just taking a while.

After a week of ugliness on this site, I decided to lose myself in breakfast this morning. My daughter wanted pancakes, so I made lazy person’s flapjacks. I made Blueberry Dutch Baby.

If only it was as easy to fix this website as it is to whip up Blueberry Dutch Baby.

I’m sharing the recipe for this moist simple breakfast dish that once presented to my daughter, she didn’t want. She just wanted to help make it. She also decided she wanted raspberry instead of blueberry Dutch baby after it was served. We have no raspberries in the house so I ate her helping.

I hope this tides you over until things are back up and running smoothly. I’ll have posts to share from Nova Scotia and a couple other recipes I’ve been working on. The latest instalments from The Hands that Feed Us are also on deck. Ditto for other food writing. I’d love to share them with you now but technically, I shouldn’t be posting at all. I just wanted an to let you know why it’s been quiet, why it will remain quiet and why it looks so wonky here.

In the spirit of that off-kilteredness, it’s fitting share an out-of-season recipe for Blueberry Dutch Baby with you, no? But feel free to swap the berries for in-season apples or pears, or whatever other fruit you have in the house.

Enjoy and see you soon, I hope.

Dutchbaby may just be one of the easiest breakfasts going. It can be made sweet or savoury (dinner!) but this one was made sweet for breakfast. It was inspired by what I had in my fridge and a recipe from the Love and Lemons cookbook by Jeanine Donofrio.

In a medium bowl, whisk the eggs and milk.

In a separate bowl, mix the flour, salt and cinnamon until well-combined.

Combine wet and dry ingredients and add half the blueberries. Give a quick stir to mix them in.

Remove the skillet from the oven and add the coconut oil, swishing it around until it's melted and coating the bottom of the pan.

Pour the batter into the centre of the hot skillet and return to oven. Bake until the Dutch baby is golden brown and puffy, about 12 to 15 minutes. (The edges will puff higher than the centre while in the oven.)

Cut Dutch baby like a pie and serve immediately.

Even though this recipe uses blueberry, feel free to swap in other seasonal fruit, such as apples. The pancake is a blank slate that goes with anything.

I put my measured amount of powdered sugar into a fine-mesh sieve and tap the edge against the palm of my hand to give an even and lump-free dusting of sugar.