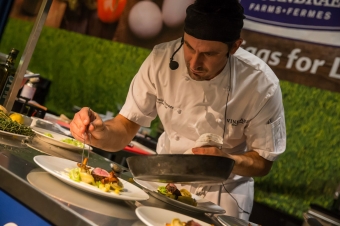 This post is sponsored by The Royal Agricultural Winter Fair. What does that mean? It means the Royal is supplying to items in the prize pack for this giveaway. It also means I was compensated for this post, though no one involved with Royal had any input into the writing or editing of this post. The Royal did supply the photos for this post.

I remember the first time I saw him.

He was tough to miss for his sizeable build, red hair and the crowd gathered around him at the Royal Agricultural Winter Fair. I dubbed him Rusty and stood awkwardly at the sidelines, like only a 15-year-old a little unsure of herself can do, as I awaited my chance to get near him.

That’s when he saw me. Rusty abandoned the hordes trying desperately to get his attention and headed my way. He grunted something as I extended my hand and he shoved his snout into it.

He let me scratch his ears, pat his head. Rusty sat down in front of me and seemed to enjoy my fussing over him. He demanded it actually. I didn’t get where he was from or much of his story. He wasn’t much of a talker, so he wasn’t offering. He may have been a Tamworth. Maybe a red wattle. But he was most definitely a pig and we were smitten with each other.

As I ran my hand over his bristly hair, I could hear the others lament that he chose me and not them. “How did she do that?” they whispered to each other as they tried to lure Rusty away with no luck.

And that was the moment I became a lifelong fan of the Royal Agricultural Winter Fair. It would be years before I would return but when I did, this time as a journalist, I was just as enamoured as I was when Rusty the pig fell for me.

Honey in jars at The Royal Agricultural Winter Fair.

I wandered through the animal barns and exhibit buildings taking in everything I could. I learned that honey was as much an expression of terroir as any bottle of wine, and marvelled at the difference between wildflower and buckwheat.

The Royal is where I discovered that Holstein cows can use as much hairspray as a 1980s hair band. That like those rockers with their teased tresses, cows can have entire teams of stylists and be divas, too.

The Royal is where I sunk my teeth into an unnamed pear and chatted with the scientist who bred it. Nine years later, I saw it officially launched at the fair as the Cold Snap, a made-in-Canada pear that would keep us in local fruit for much of the winter.

This year the Royal turns 95 and while I’ve never found another Rusty, there is a roster of attractions I’m eager to see during its 10-day run at Exhibition Place Nov. 3-12. Indigenous chef David Wolfman will do an indigenous fusion cooking demo on Sunday, Nov. 5. Momofuku Diashou’s Paula Navarrete will work magic with ingredients from a Creemore vegetable farm, while the grower, Brent Preston, regales the curious with his story of leaving the city for country life.

For a brief moment, I might contemplate it, too, but scratch that thought as I head excitedly to the birds of prey demonstration. That’s where I’ll learn about the role these feathered types play in modern agriculture and wish I was a falconer or ornithologist.

Apples ready for baking at The Royal Agricultural Winter Fair.

Yup, a girl can dream. And the Royal Agricultural Winter Fair is where I do it as I fill my face with those famous apple dumplings, sample VQA wines or craft beer and cider, coo at the animals (sheep really seem to like me, too), and buy wild rice at the Northern Ontario exhibit. This year, I plan to take my three-year-old so she can marvel, too.

Maybe I’ll see you there. Maybe I won’t because it is the world’s largest combined indoor agricultural and equestrian show. It's entirely possible we could both be there but never cross paths.

In the sheep barn at The Royal Agricultural Winter Fair.

But if you want tickets — and then some — I’m giving away a Royal prize pack to get you in the door and keep you in a Royal state of mind after the fair ends. The package includes a  GO Train family pass and admission to the fair; t-shirts for you and your kids; food vouchers to feed you and your family at The Hitching Ring; two posters; a silk scarf; apron; two stuffies; a book about the history of the fair; and a bag to carry all your swag. The entire prize back is worth $420.

I took this photo.

Enter using Rafflecopter below. The winner will be selected Tuesday, Oct. 31 (Happy Halloween!). Of course there will be a skill-testing question because rules are rules. But the good news is, they’re never hard and it may lead you to a love story of epic proportions like mine and Rusty’s.