The Hands that Feed Us: Kashima Woodham

Posted Oct 18th, 2017 in Eating Niagara, On the Farm, The Hands That Feed Us, Food Stories 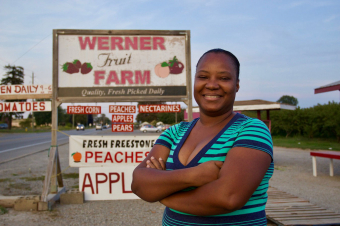 Kashima Woodham’s typically wears jeans and a T-shirt to work.

But to many in her life, Woodham, 33, may as well be sporting a superhero’s cape.

The seasonal agricultural worker from Montego Bay, Jamaica, is so respected by her family for all the work she does running a Niagara-on-the-Lake fruit stand in the summer. They admire her sense of adventure, leaving them and the comforts of home for four months a year to come to Canada.

Mostly, though, they appreciate what Woodham, a single mom and the oldest of six daughters, does for them.

Woodham’s earnings between the start of strawberry season in June and the end of apple harvest in early October also provide for her own son, Rasheed, 11, and her grandmother.

And for that, they’re grateful.

“Basically, everyone looks up to me,” Woodham said with a smile.

For those of us who frequent Werner’s just past Lock 1, Woodham is a hero for her ability to point us to the best baskets of peaches when the red and white stand is creaking under the weight of another harvest.

She’ll tell you whether you might prefer red or yellow plums, if you ask her advice. Or she’ll simply wait patiently for you to choose for yourself.

What really makes Woodham stand out through it all is the fact that she is a woman. Only about four per cent of farm workers who come to Niagara from Mexico and the Caribbean for up to eight months each year are female. That works out to about 112 of the roughly 2,800 migrant labourers who keep the region’s farm economy running.