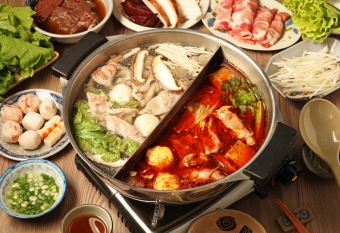 I don’t remember much about the food from my days in journalism school in Regina 17 years ago.

Still, there were watershed moments for an aspiring food writer. It’s where I figured out how to use chopsticks while eating a bowl of slippery rice noodles at one of two Vietnamese restaurants in town.

It’s also where I was introduced to Chinese hot pot, a soupy affair hosted by a classmate missing the familiar tastes of her home in Vancouver.

A handful of us gathered around a steaming communal cauldron in the centre of her dining room table. It was filled with a clear broth and flanked by plates loaded with fish balls, shrimp balls, sliced meats, Chinese greens and noodles that we would each cook in the soup.

After a short primer on how to enjoy Chinese hot pot — cook the meat first, veggies second, noodles last — I used my newly minted chopstick skills to drag paper-thin meat slices through hot broth. We dropped in meatballs that bobbed in boiling liquid, then dunked greens, yanking them before they went limp.

There was this magical symbiosis happening as the broth flavoured everything cooked in it, but then took on a depth and richness from the food it boiled. We drank it at the end.

Everything was anointed with aromatic, salty, spicy dipping sauce before we devoured it.

To this kid of German immigrants, it was like meeting fondue’s more worldly and well-heeled cousin. It was as much a social affair as dinner, and it was a good two hours before we finally put down our chopsticks.

Until recently, that was my only hot pot experience. My statistics have improved now that St. Catharines is home to two all-you-can-eat hot pot restaurants, which opened in the summer.

Here’s everything you need to know about them and how to eat hot pot.

Anyone who remembers the first incarnation of Vaughn’s International Cuisine on St. Paul Street will feel their jaws dropping when they walk into the building’s current tenant, The Hot Pot King.

But the concept of hot pot was so new to St. Catharines two years ago when they started building The Hot Pot King that local health inspectors needed the trio’s help establishing standards for such table-top cooking, Sun said.

The Hot Pot King is a more modern take on what some food historians call the granddaddy of all hot pots that spread to other Asian nations where it was adapted to regional tastes. Rather than share a communal bowl of soup, each diner gets their own hot plate and pot of chicken-based broth, including a simple clear broth, curry, spicy or a vegetarian version made punchy with pickled cabbage.

Animal and plant proteins, vegetables and a variety of noodles are ordered off an iPad menu, and come in small quantities to help diners pace themselves. A station stocked with chilli pastes, vinegars, oils and other sauces provides everything needed to create a dip that cooked meat and veggies are dunked into post-boil. Ready-made sauces are also available.

“If you don’t know what you want, we can make it for you,” Sun offered hot pot newbies.

Hot pot is a staple of Lyn Vo’s family meals.

So it was as though she were inviting the city to her table when she and her family opened Lang, which means village in Vietnamese, on Church Street.

“The hot pot is exactly like we eat at home,” Vo said about Lang’s offerings. “We eat it a lot.”

Noodle soup fans in the city may recognize Vo from her days minding the till at her family’s other eatery, Pho Dau Bo, on nearby Geneva Street.
While Pho Dau Bo’s calling card is inexpensive meals and quick service, Lang is all about lingering.

“You can relax,” Vo said. “Honestly, you can eat as fast as want or slow as you want. We like our customers to sit and enjoy.”

The ordering process is simple: Diners are seated at tables with built-in hot plates and choose their broth and proteins from a paper checklist. There’s a smaller menu with chicken, beef, pork, lamb and seafood options, and an “extreme menu” that includes items such as pork blood or tripe.

Once those are chosen, they help themselves at a cold counter offering vegetables such as okra, corn, watercress, napa cabbage, crunchy lotus root and taro. This is also where vegetarians will find their happy place with tofu in various incarnations — shreds, knots, soft chunks. And it’s where you’ll find egg noodles, rice noodles, instant noodles, udon, rice and vermicelli.

While the offerings between Lang and The Hot Pot King are similar, the big difference is the broth. There’s plain, tom yum, spicy, and sweet and sour at Lang. And a lot of lemongrass and ginger, Vo said. “That’s just what my mom has always done.”

Rather than serve broth in individual pots, Lang sticks to the communal cauldron. You can get a split pot with two types of broth, however.


Dos and don’ts of hot pot


• Give yourself at least two hours to eat. The selling point, Sun said, is that hot pot allows diners to sample many different foods. If you find the experience overwhelming, try lunch instead when The Hot Pot King serves a smaller, set menu and chooses the items for you.

• Do eat everything you order. Diners are charged for food they don’t eat, save for the broth, which is refilled throughout your meal. “You don’t have to finish the soup. It’s just a tool used to cook the food but for sure, you can drink it,” Sun said.

• Don’t overcook your meat. Thin slices only take about 15 seconds to cook, seafood about 30 seconds, and meatballs need at least one to two minutes. Vo cooks her meat one slice at a time to achieve the perfect level of doneness.

• Don’t stress about germs. Vo noted some people don’t like putting their chopsticks in a communal pot of soup, but the broth is boiling, curbing contamination among those who share.

• Don’t forget the dipping sauce. Vo and Sun maintain that may be the best part of eating hot pot, and both offer DIY dipping sauce stations.

• Have an open mind about cooking your food yourself. “You can customize it,” Vo said. “If there’s something you don’t like, play around with it.”