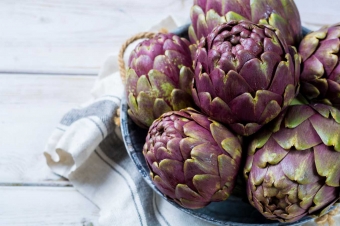 Artichokes are loaded with antioxidants to keep us healthy. But those aren't the only benefit of eating this cousin of the common thistle. I originally wrote this story about the health benefits for artichokes for Lifetime Daily.

Think of the common garden thistle. A prickly, pesky weed likely comes to mind. It might be surprising to learn that the thistle’s purple blooms are related to one of spring’s healthiest veggies: the artichoke.

Lined with thick layered petals, globe artichokes cut a beautiful figure. They also rank among the top sources of antioxidants of any food. (Beans and russet potatoes were also tops among vegetables.) But their health benefits, especially for older adults, don’t end there.

The Health Benefits of Artichokes

1. Artichokes are loaded with dietary fiber.

Put down that bran muffin and reach for artichokes to promote regularity and colon health. One medium artichoke has about 60 calories and provides more than 10 grams of soluble and insoluble fiber. Fiber is a type of carbohydrate that helps regulate appetite, digestion, blood sugar, and cholesterol.

A study published in Oxidative Medicine and Cellular Longevity, a peer-reviewed journal, showed that the polyphenols in artichokes have anti-cancer properties. The study found that the long-term intake of artichoke polyphenols suppressed breast cancer cell growth. A promising sign in the ongoing fight against breast cancer.

3. Artichokes are a good source of Vitamin K.

One medium artichoke provides nearly a quarter of the recommended daily intake of Vitamin K. Vitamin K, which works to clear calcium out of arteries and into bones, has been linked to the prevention and treatment of Alzheimer’s. Unfortunately, many older adults are deficient in this important vitamin.

4. The antioxidants in artichokes help your liver produce bile.

Bile protects your liver against toxins and assists with digestion. Artichokes have been found to have lipid-lowering powers. Lipids (or fats) processed by the liver include cholesterol and triglycerides, both of which can pose problems for cardiovascular health.

How to Prepare an Artichoke

It’s easy to be intimidated by the tough-looking exterior of an artichoke. But this veggie is proof that it’s what’s on the inside that counts. There you’ll find the heart of an artichoke, which, once cooked, is full of sweet, earthy flavors.

Preparing an artichoke is easier than it looks. Simply trim the veggie’s tough outer leaves and cut the top off the globe. Squirt with lemon juice to prevent discoloration, then steam the artichoke in a pot filled with an inch of water. Once cooked, pluck the leaves. When you get to the heart, gently scrape out the fuzzy choke and dig into the fleshy center. Artichokes also have rich flavor when grilled or braised.

For a quick fix, plain and marinated artichoke hearts are available in cans and jars at most grocery stores. A handful of artichoke hearts is the perfect addition to any salad, homemade pizza or salsa recipe.