How to Steep the Perfect Cup of Tea 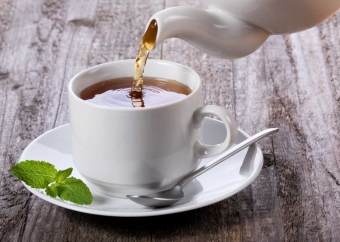 It was her Welsh grandmother, Gwen, who recruited her as a young girl with a cup of steeped black leaves softened with generous additions of milk and sugar.

Cicci takes a little less of each in her orange pekoe these days. She’s also become an ace at properly brewing a cup of steeped leaves, which she’ll happily serve you with all the milk and sugar you want at her shop, Gwen’s Teas, in St. Catharines.

For those who prefer to have a go at the perfect cup themselves, here are Cicci’s tips for a tisane that’s tops.

From black to white, green to pu’erh (pronounced poo-air), herbal to oolong, there’s no shortage of tea types to put in your cup. It’s all up to personal taste, including what accompaniments you add to drink it down.

“There are rules that exist to get the best flavour, though,” Cicci says. And that comes down to knowing the ideal water temperature to tease out the essence of your favourite leaves.

Use fresh water “just off the boil” for white or green tea, including matcha, that won’t leave you seeing red. The cooler water temperature won’t scald the tender leaves, so catch your kettle before it starts its shrill shriek to indicate a rolling boil, or let it sit for a few minutes afterward, Cicci advises. Start stepping when water reaches 80°C (176°F).

Black tea can stand the heat, however, because it’s been oxidized. Herbal and rooibos teas also like it hot. “You definitely want to use boiling water,” Cicci says.

Steep your leaves for too long and you’ll pour nothing but a bitter brew from your Brown Betty. Three to five minutes is the general range that Cicci recommends for steeping.

Green tea needs the least amount of time to soak. Give it one to three minutes maximum, otherwise one sip might leave you feeling as though you’ve been dropkicked in the throat.

White tea and pu’erh are good to go after three minutes, while black and herbal leaves can stay steeping for up to five minutes.

“The reason you don’t want to go longer is because it changes the property of it,” Cicci warns. “With black tea, you’re losing caffeine, whereas with herbals, it pulls more flavour out and they don’t have as much to lose from over-steeping.

How much is enough?

The general rule is one teaspoon of loose-leaf tea per cup. That changes if you’re brewing an entire pot.

“There’s a British expression: a teaspoon per person plus one for the pot,” Cicci says.

Still, some people don’t find that’s enough to make more than coloured water in their cup, so Cicci suggests increasing the amount of tea used to boost flavour rather than extending the brew time.

“You don’t want to over-steep, so it’s safer to have more than a teaspoon to bring out the flavour,” she advises.

Be careful not to stuff your infuser too full, though. You want enough room for tea leaves to expand and water to pass through them.

Good news is green and white teas can be steeped more than once to bring out different nuances in their flavour. Black tea peaks at one brew.

Some have steadfast rules about the proper vessels for serving and sipping tea. Cicci doesn’t hold it against anyone for choosing a chunky ceramic mug over fine china to lap up their lapsang souchang, however.

“That comes down to personal preference. In China, they use cast iron or terracotta and small cups. That’s more a cultural thing than bringing out the taste.”