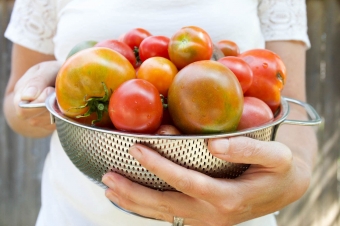 Got heaps of tomatoes? Roasting them for freezing is the easiest way to preserve tomatoes and prevent waste. It's also incredibly flavourful.


Last Wednesday night as I stretched my confused muscles after a run, I told my jogging mate I refused to wear socks until the end of September.

Less than 12 hours later, I was wearing socks. So much for that.

The following day, the mercury didn’t touch 20°C and I found myself layering on clothing that hadn’t been touched since May. I felt like I was being a bit dramatic as I headed with my husband and daughter to the Niagara Greek Fest wearing a jacket, sweater and, of course, socks. He was in shorts and a t-shirt. He did put on a nylon jacket after looking at me, which I saw as an act of solidarity to spare me looking totally ridiculous dressed for cold next to a summery dude. Our girl was in tights and a tee, and runners sans socks; a happy medium.

“I feel like I’m overdressed,” I said as we walked down our north St. Catharines street toward the Hellenic harmonies being plucked on bouzoukis in the distance.

I regretted my decision only until I saw two women in t-shirts with arms crossed for warmth rather than body language. And when we headed home a few hours later, I knew I nailed it because my husband and daughter complained of being cold. I could have stayed out all night.

This is not me saying I’m perfect. Far from it. The days since have been filled with bad wardrobe decisions, jokes that fell flat, misspeaking and misunderstanding.

And if you’ve seen the 2017 edition of my garden, well, you’d know for sure that perfection eludes me. It’s a gnarly mess of foliage that went crazy with all the rain we’ve had, and only now is turning out fruit. My tomatoes are a riot of greenery but finally — finally — the orbs weighing down those verdant stems are changing colour and ripening. It took months, and it’s happening later than usual. Many of those long-awaited tomatoes are also misshapen and spotted.

But they’re tomatoes, imperfect as they are. As I am.

Imperfection has its benefits, though. Or, at least, imprecision does. When the flood of tomatoes comes, I can’t eat enough to keep up so I preserve them using the easiest method possible.

That does not include peeling and jarring them in some fashion. Peeling tomatoes is one of my least favourite kitchen tasks. It’s tedious and messy. So my solution for years has been to roughly chop, douse with olive oil, roast and freeze.

A few weeks ago, I posted this procedure on Instagram Stories and got lots of questions so I figured a blog post was in order. My answer to everyone was virtually the same: The measurements were approximations. Don’t worry about being perfect. You can fine-tune when you use your stores for soup, sauce or stew in January, during real sock weather.

What is perfect, though, is how incredibly easy and flavourful this method of preserving tomatoes is. It's mostly just winging it, like me with a forecast. Got some peppers? Chop them up and throw them in, too. Ditto for herbs. Whatever you have in excess, add it to the roasting tray.

Only have tomatoes and olive oil? Perfect. Really. Like I said, this is the easiest way to preserve tomatoes.

If only getting dressed were as simple.

Looking for another way to preserve tomatoes? Oven-drying is also a cinch.

The Easiest Way to Preserve Tomatoes

This recipe isn't about perfect measurements or precision. Most of the time, I just eyeball it and I've never been disappointed. Perfecting it comes later when you use it as a base for soups, stews and sauces and season according to that recipe. All you need now are tomatoes, olive oil, salt and pepper, but in my world, the garlic isn't optional while the peppers and herbs are. Feel free to use whatever vegetables you have on hand, just mark it on your freezer bag so you don't forget what's what come post-tomato season when you tap into your stores.

Toss tomatoes and any additional vegetables and herbs, olive oil, salt and pepper in a 9x13-inch (3L) roasting dish (or a smaller 8x8 dish if you're using only tomatoes and a smaller quantity), and spread mixture evenly in dish.

Roast for 30-45 minutes, until tomatoes start to brown and the mixture becomes soupy. Stir halfway through.

Remove from oven and let cool to room temperature. The mixture will thicken as it cools. Scoop into a freezer bag, removing as much air as possible before sealing. Lay flat to freeze. Store in freezer for up to six months.