The Hands that Feed Us: Kennedy Williams 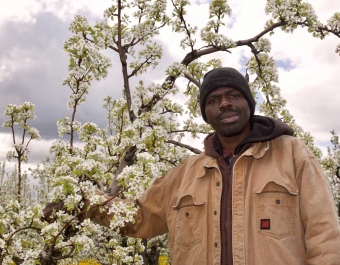 It’s a cool spring day, and Kennedy Williams isn’t fussy about his outfit.

The seasonal agricultural worker is dressed in layers — shirts under a hoodie covered with an oversized canvas jacket. He’s wearing a tuque to cap off his ensemble.

Williams makes a quip about his six layers of clothing, grabbing a fistful of fabric and lifting it up to show how bulky the get-up is.

If Williams had his druthers, it would be warmer outside and he would be dressed in lighter garb like he’s used to wearing back home in St. Andrew Parish, Grenada. But after 13 years of coming to Canada for five-plus months a year to work on Torrie Warner’s Beamsville fruit farm, he knows the ups and downs of Niagara’s weather.

This day is definitely a down. There’s the expectation of warmth because it’s May, but the reality is a crop-threatening — and livelihood-jeopardizing — frost looms in the forecast.

The weather here is unpredictable but one thing Williams, 45, can count on is a paycheque to support his wife and two adult daughters back home in Grenada.

“It’s better for me to come here,” Williams says. “I do a little better coming here than staying back home.”

That’s only financially, though. Williams is a taxi driver, shuttling locals to and fro in St. Andrew. He was working in landscaping when he made the decision to participate in Canada’s Seasonal Agricultural Workers Program, which brings 2,800 men and women to Niagara from the Caribbean and Mexico every year to work on farms that need the manual labour.

His experience pruning trees and cutting grass in Grenada made him a natural for work here.