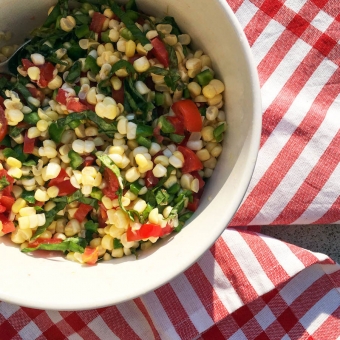 One of my favourite ways to eat corn at the height of the season is in Bryant Terry's fresh corn salad with bell peppers and tomatoes. It's sweet and easy.

How is it that next weekend is Labour Day?

And that everyone will lament the end of summer, even though the calendar will say there are still three weeks left?

And all talk will turn to sweaters, crisp mornings and pumpkin spice everything? Meanwhile, I’ll still be eating peaches and trying to go without socks as long as possible.

I have one word in response to all of this ‘summer’s over’ nonsense: Resist.

Do it with this corn salad by Bryant Terry from his book Afro-Vegan. It became a family favourite when I turned to it two summers ago for a break from the usual grilled or boiled cobs. It epitomizes the season — hot days, cicadas buzzing, lineups at farm stands making brisk business of the latest harvest.

There’s still a bit of time left in corn season. I usually get mine from Tom Neufeld at the St. Catharines Farmers Market. His white corn is something to behold; chewed slowly and savoured, though it’s tough to pace myself in its presence. Werner’s Fruit Farm is another regular stop. A quartet of cobs to go with my basket of peaches is how that all goes down.

Terry's Afro-Vegan is on my list of favourite summer cookbooks largely because of this corn salad that requires no cooking. Someone asks for the instructions every time I make it, so here it is. The good folks at 10 Speed Press are letting me share it.

It’s timely, given corn season is still on, but also for more than that. I’ve always been grateful to have Terry’s voice in my cookbook collection, but it’s especially poignant now. If you have a copy of Afro-Vegan, grab it and give the introduction a re-read. If you don’t have a copy, borrow or buy it and take in what he puts so simply. It’s been important since Afro-Vegan was released in 2014, but even more so now.

Then make this salad and put that countdown to fall on hold for a few minutes, at least.

This corn salad recipe from Bryant Terry's Afro-Vegan is a brilliant way to showcase the flavours of the season without having to do any real heavy lifting. Because there's no cooking, the ingredients speak for themselves. Just make sure to use the freshest possible. Terry does suggest the mixture could be sautéed, if you'd like. Reprinted with permission from the publisher, 10 Speed Press, a division of Random House LLC, from Afro-Vegan by Bryant Terry. Copyright 2014.

Combine the corn, bell pepper, tomato, oil, chile, and salt in medium bowl and stir to combine. Season with white pepper and, if desired, more salt.

Serve garnished with the basil.

Don't sweat it if you have trouble finding an African bird's eye chile. In those moments, I've turned to whatever hot peppers my CSA basket offers, from jalapeño to hungarian hot to some other easily recognizable spicy specimen whose name I may not know. I adjust amounts according to heat levels to get the sweetness of the corn and the heat of the pepper playing off each other, instead of one overriding the other.