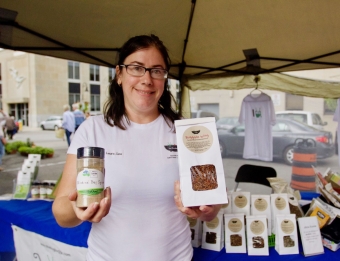 When the salad I made for lunch today needed something more, I dumped the last of my daughter’s goldfish crackers on top of it.

When Laura-Lea Guitard’s leafy greens are lacking, she doesn’t follow my lead. She doesn’t even reach for the common crouton. Instead, Guitard opts for roasted crickets to give her spring mix more crunch.

They might be honey garlic-flavoured, maybe sour cream and chive. But always unmistakably those critters known more for singing us to sleep at night than souping up our salads.

How they taste might be subdued, but for many the thought of deliberately eating winged or crawly things is downright intimidating. Gross, even.

Guitard knows this. Not only does she include crickets and mealworms in her diet, she also sells them with the hope others might decide to wing it at dinner and try some in a stir-fry.

Guitard is the proprietor of The Bug Buggy, her six-month-old business venture at St. Catharines Farmers Market that she hopes will make eating bugs more mainstream in Niagara.

She isn’t trying to be a fly in the ointment by suggesting we consider swapping our usual protein powder for ground crickets in our smoothies. In fact, it’s no great leap to sell — or eat — insects. Environmentalists tout it as the protein of the future for steak-loving North Americans.

Add to that the world’s swelling population and increasing appetite for prime cuts, and there’s a potential environmental disaster in the making. According to the Food and Agriculture Organization of the United Nations, current livestock production will need to double to feed the world by 2050.