The Hands that Feed Us: Eric Regis

Posted Jul 26th, 2017 in Eating Niagara, On the Farm, The Hands That Feed Us, Food Stories 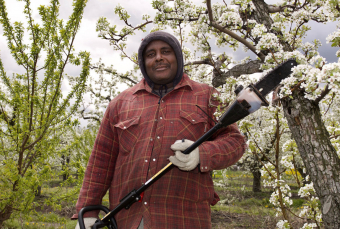 Eric Regis walked toward my hatchback like a magpie to something shiny.

“Is this your car?” he asked me as he pulled out his cellphone.

“It is,” I told him while he held up his phone camera and looked at my car through the touchscreen.

Regis focused his shot and explained he could snap a picture of the spring green finish and have the paint shop back home in his native Grenada match it and mix a batch of liquid colour for him.

The nearly neon hue isn’t for the faint of heart, though, and I wondered if anyone would want anything coated in it.

“It would fit in back home,” Regis said.

He would know. When Regis isn’t tending to a fruit orchard in Beamsville, he paints houses in Grenada’s St. David Parish. Bright colours, like spring green, are popular there, and business is good when he’s home.

“I love it. It’s like art,” he said. “The colours, they’re beautiful green, coral, blue colours.”

In 1989, Regis put down the paint brush for a few months to take a job at Fred Warner’s fruit farm. He was 21 at the time, and convinced he wanted to participate in Canada’s Seasonal Agricultural Workers Program after learning about it from his boss.

Grenada is one of five Caribbean countries to participate in the federal program that’s been supplementing Niagara farmers’ local workforces for 51 years.

Workers, like Regis, are critical to the economic success of horticulture in Ontario. It’s estimated that for every seasonal worker employed through the program, at least two jobs are created for Canadians in the agri-food industry, according Foreign Agricultural Resource Management Services (FARMS), which oversees the program.