The Hands that Feed Us: Devon Augustine

Posted Jun 27th, 2017 in Eating Niagara, On the Farm, The Hands That Feed Us, Food Stories 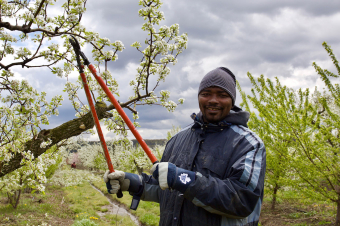 Devon Augustine had never seen an apple tree until he came to work on a Beamsville fruit farm 14 years ago.

Sure, he could get apples back home in Grenada, but they weren’t grown there. They had to be imported from the U.S. and weren’t all that good. They certainly didn’t taste like the proverbial doctor repellent that grew on the trees he would prune and later harvest when he first arrived in Niagara so many years ago.

The first three seasons Augustine worked for apple grower Torrie Warner, he would feast with his colleagues, eating more than two dozen apples a day and building up what should be enough credit to keep doctors away for years.

“We would sit and eat apples all day,” Augustine, 46, recalled with a smile. “Apples here are really fresh, much more fresh than what you get in my country.”

Back home in his country, population 107,837, farmers grow different crops that would undoubtedly be a revelation for us to see.

Grenada is dubbed the Spice Isle for all its nutmeg plantations. Cinnamon, cloves, cocoa, bananas and coffee are also as common as peaches, pears and cherries are here. In fact, Augustine’s family grew many of those very crops in a country that’s one of several Caribbean nations, including Jamaica, Barbados, Trinidad and Tobago, to participate in Canada’s Seasonal Agricultural Workers Program.

Every year, more than 2,800 men and women come to Niagara from the Caribbean and Mexico to do the work in local orchards, vineyards and greenhouses that just as many Canadians don’t want to do themselves.

Augustine stays between five and seven months of the year, depending on the season. He clocks between eight and 10 hours a day tending orchards and Warner’s farm stand; more come August and September when those apples and other fruit are ripe for picking.