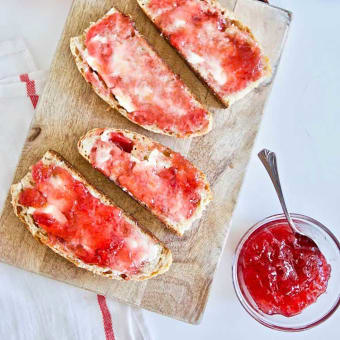 Amy Bronee's rhubarb jam is a wonderful way to preserve one of spring's finest crops. This easy-to-make jam is bound to become a family favourite. This post does not contain affiliate links.

There’s a scent in the air at this time of year that I want to fill my lungs with every chance I get.

It’s strongest in the morning, just after the sun has come up. It’s sweet and glorious, a mix of flowers, greenery and earth; the remnants of the rain from the night before or the coating of syrupy dew before the sun’s rays have cut through it. It’s like every pore on the Earth’s surface has opened to spill this balm.

I gulp it in when I let Louie out for his morning jog. Like a reflex reaction, the corners of my mouth curl upwards and I stand a little taller. I instantly feel awake and excited about what the day holds.

This is what late spring smells like. It’s the smell of potential.

Sometimes, though, it fills me with crazy ambitions. That shot of energy I get from that deep, mindful breath makes me think I can do anything.

So I make my to-do list a little longer and say yes a little more often to things I should have considered more carefully. But when I wonder what the heck I was thinking, I step outside, breathe in until my chest has no more room, and feel rebooted.

Another smell gets to me just as much at this time of year.

It’s the fragrance of fruit or vegetables stewing in a heavy pot on the stove in my kitchen. It’s a preserve in the making that will become a reminder of the season later on when the scent of the air changes to something greener and grassier, or eventually decay and wood smoke before the austere aroma of a cold winter’s day sets in.

Like a ritual, my preserving has a pattern. It starts in late May with a recipe I’ve made for only the past two years, but that’s long enough to call it a tradition in our house. It’s the rhubarb jam recipe from Amy Bronee’s book, The Canning Kitchen.

I love it because it brings out the best in the spindly stalks my rhubarb plant offers from under the shade of our silver maple. The jam is a jewel-toned beauty. It glows red like the first stalks from my plant or gives off a more subdued pink when they bear more green later in the season.

The best part is its simplicity, which is the calling card of so many of the recipes in this book. It’s just rhubarb, sugar, water and pectin, so the main ingredient shines.

Last year, I only kept two jars for myself, sharing the wonder of this jam with others, including a skeptical recipient who claimed to hate rhubarb but then grovelled for the recipe after tucking into her jar.

I’m always happy to share what’s good. But since December, my daughter has been asking for rhubarb jam on her toast. And I’ve quietly been craving it with nothing coming close to filling the void. It’s easily my favourite jam, replacing apricot as my cornerstone of conserves.

I made a new batch a few weeks ago to finally deliver on those requests for rhubarb jam on toast. Today it was on porous slices of slow-rise oatmeal bread. I’m being a little more protective of my stash this year, squirrelling most of it away for us. Selfish, I know.

Fortunately, Amy has graciously let me share her recipe here for others to make their own supply. Be sure to breathe deeply while doing it.

Want another rhubarb jam recipe? Try my recipe for Bloobs and Rhoob, a sweet-tart preserve made with blueberries and rhubarb.

Rinse the rhubarb in cool, running water. Chop in 1/2-inch (1 centimetre) pieces. In a large, heavy-bottomed pot, bring the rhubarb and water to a boil over high heat. Reduce the heat to medium and cook, covered, for five minutes to soften.

Stir in the pectin powder. Cover and continue cooking for two more minutes. Stir in the sugar. Turn the heat back to high and bring the jam up to a full rolling boil, uncovered, and stirring constantly. Maintain a hard foamy boil for one minute.

Remove from heat. Skim off and discard the foamy pink scum.

Immediately refrigerate any jars that don’t seal within 24 hours of processing.

Rhubarb should feel firm and crisp. Store it in the fridge and use within a few days or chop and store in the freezer for up to six months. The colour of your jam depends on the colour of your rhubarb. Young, red stalks make for a vibrant pink jam but jam made with green rhubarb is just as tasty.

Want another rhubarb jam recipe? Try my recipe for Bloobs and Rhoob, a sweet-tart preserve made with blueberries and rhubarb.