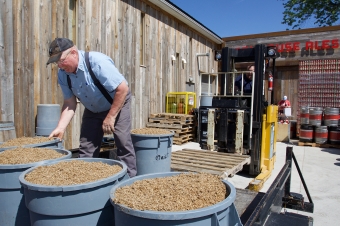 This post was sponsored by the Greenbelt Fund. What does that mean? I was paid to write about a topic inspired by stories published in The Toronto Star about Ontario’s Greenbelt. The ideas, interviews and writing are my own. The Greenbelt Fund fact-checked all information, including numbers and statistics, about the Greenbelt in this post before publication.

Most people head to Oast House Brewers in Niagara-on-the-Lake for a pint. Paul Kiefer goes to the craft brewery to feed his cows.

The Cayuga farmer stops in a couple times every week to take a load off Oast House in the form of nearly 1,500 kilograms of spent grain that would wind up on a compost heap without Kiefer’s hungry herd to enjoy it.

It would also cost Oast big bucks to get there.  The brewery goes through as much as 16,000 kilograms of malt every week to make its suds, including the crowd-pleasing Barnraiser Farm Ale, sweet and nutty Bière de Garde, and my favourite, the mouth-puckering Bière de Mars.

Kiefer and his 30 Hereford, Limousin, and short-horn beef cattle gratefully step up for Oast House’s spent grain instead. The free malt gives the animals energy to complement the protein from the hay in their diet, Kiefer said.

“We knew the waste stream was going to an issue, so we were very proactive when we opened to move it,” said Mike Pentesco, Oast House brewmaster. “It’s nice that I’m not throwing it away. It’s perfectly usable in another capacity. It’s definitely about minimizing waste and making sure everything is used as fully as possible.”

Other farmers also pull up to Oast’s loading dock for a share of the brewing process leftovers. Local dairy farmer Fred Stewart, and Juliet Orazietti and Martin Weber of the Linc Farm at Southbrook regularly stop by for used malt to pad out their animals’ feed.

Bakeries and mushroom growers have all incorporated Oast House’s leftover grains into the work they do, too, attesting to how integrated the brewery has become in the community. It’s more than just a neighbourhood watering hole, though it is fantastic one at that.

“(Farmers) know breweries are a good source for this kind of stuff,” Pentesco said.

Oast House is one of nearly 180 breweries and 250 stops featured in the Greenbelt Fund’s Brewery Discovery Routes program. The Brewery Discovery Routes are a collection of self-guided craft beverage and culinary tours within Ontario and its Greenbelt, a 2 million-acre swath of protected farmland, forests and wetlands that includes the northern tier of the Niagara region and Oast House.

Paul Kieffer loads spent grains on to his truck

The routes send traffic to rural areas where the impact of visiting businesses like Oast House can’t be understated. Every dollar spent in communities on the Brewery Discovery Routes map puts $2.14 back into the local economy, as mentioned in a recent Toronto Star feature.

The Brewery Discovery Routes get us from Spot A to B to C so visitors can learn how connected the stops are to one another. Breweries like Oast House are full-fledged members of local food systems, building, supporting and sustaining them.

Take, for example, that Oast House buys peaches from local farms for one of its most popular summer brews, a hefeweizen called Konnichiwa Peaches.

Oast House Brewmaster Mike Pentesco.[/caption] Right now, the brewery has a sour beer made with Lepp Farms’ verjus, the tart juice of unripened grapes culled during a critical juncture in the growing season when grapes change colour on the vine. Those unripened grapes often go to waste and have no value for farmers. As verjus and a beer additive, they do.

Adding Value to the Food Chain

Then there are the grains, which Oast passes along in the food chain to local farmers and bakeries after using them for beer. They either add heft to hay for animals or are milled to provide humans extra fibre and flavour in bread. De la Terre bakery in Vineland, and Willow Cakes and Pastries and Backhouse restaurant in Niagara-on-the-Lake have all folded Oast’s spent malt, which looks and smells like steel cut oats, into their loaves, soft pretzels and pizza crusts.

It’s not a sales gimmick, either. There’s nutritional benefit to incorporating the grains in other edibles. The brewing process extracts only the sugars from the grains, leaving the vitamins and minerals behind.
That’s why Kiefer drives than 160 kilometres twice a week to gather Oast House’s spent grain for his cattle. They struck a relationship while his son was attending the brewmaster and brewery operations program at Niagara College.

His teacher was then-Oast House brewmaster Kevin Somerville, who offered the spent grain to anyone in the class who could use them. Hay was in short supply that year, so Kiefer’s son raised his hand.
“Mike and his crew have been very good at keeping me stocked,” Kiefer said.

Bellying up for Spent Grain

Kiefer was even more grateful for the free food source this past winter when hay was scarce again after last summer’s drought. Each animal, especially the cows, devoured up to 25 pounds a day of Oast’s spent grain and have lots to show today for those feasts.

The entire herd have become connoisseurs of Oast’s brews in the process. The cattle come in from the field at “a good clip” when they see Kiefer’s truck coming with a fresh load. They really hoof it for the grains used in Oast’s sweeter dark suds, and some of the seasonal editions, too.

“When Mike and his crew make their pumpkin ale, the cows just love that,” Kiefer said. “They love the squash, too.”

Heading out on a Brewery Discovery Route? Don't forget to use the hashtag #brewroutes17.