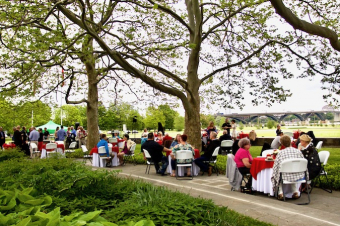 There’s a structure at the end of the Niagara Parkway in Fort Erie.

It’s a big arch on an even bigger lawn, and it overlooks the spot where Lake Erie funnels into the strident Niagara River.
I found out last week it has a name — two, in fact: Mather Arch or Mather Park Gate.

For the 12-plus years I’ve lived in Niagara, Mather Arch was a nameless landmark to me. Its purpose was to simply let me know I was getting to close to my usual Fort Erie destinations of Happy Jack’s or Ming Teh Chinese restaurants.

But last week, instead of telling me dinner was just around the bend, Mather Arch was where I ate my last meal of the day. It was the site of a pop-up dinner hosted by Niagara Parks, which put the invitation out by social media to eat, drink and be schooled in history and architecture at a spot many of us have likely only driven past en route to somewhere else.

The dinner was part of Niagara Parks Commission’s Begin Here: Canada 150 at Niagara Parks celebrations. It was one of a series of meals Niagara Parks is planning in unexpected places this summer.

Stopping and smelling the roses, or on this evening the fried Lake Erie Perch, at one of its lesser known sites was partly the point of the Mather Arch pop-up, explained Ryan Moran, Niagara Parks’ senior manager of marketing. The parks commission bills its real estate along the Niagara River as a 56-kilometre outdoor museum. So it’s keen to market more than the giant cataracts down the road.