Shell Game: How to shuck an oyster like a champ 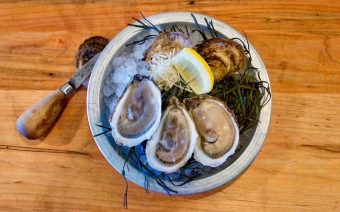 Oysters are everyone's favourite bivalve. Mike Langley from The Tide and Vine Oyster House in Niagara Falls teaches us how to shuck an oyster like a champ. This story was originally written for my How-to column in Niagara Life magazine.

Jonathan Swift said it was a bold man who first ate an oyster.

It could be argued it was a bolder one who took on that prehistoric-looking shell, seemingly impenetrable when closed.

To the faint of heart, oysters can be tough to crack, and Mike Langley, owner of the Tide and Vine Oyster Co. has painful tales confirming it. The 2013 Canadian Oyster Shucking champ has suffered a few nicks on his way to becoming the fastest, cleanest shucker in the land. He’s also seen others suffer more serious gashes — even a broken ankle — in their quest for shucking glory.

Langley’s need for speed while prepping shellfish compelled him and partner Katrina Steeves to host Oyster Fest Niagara every June in Niagara Falls. But done at a slower pace, shucking an oyster doesn’t have to be a blood sport. It’s one of those life skills that’s handy when you want to treat yourself to the delicacy of a fresh, briny mollusk, dazzle friends, or if you find yourself hungry on a desert island.

We caught up with Langley to walk us through how to shuck an oyster like a champ.

Not all oysters are created equally, so it’s best to start with a high-quality mollusk whose shell is fully intact.

There are five types of oysters to choose from and the differences between them are much the same as those subtle nuances found in wine, Langley explained.

The five types are:

The tools of the trade

Shucking is simple when it comes to the gadgetry required: two hands and one shucking knife usually do the trick. But the secret is in the knife you use.

Langley prefers a shorter blade, about two inches long, with a bulbous wooden handle that allows for a good grip. The short blade gives him better control but just like oysters themselves, the knives used to shuck them come in all sizes and shapes. As with any knife, it’s important to find one that feels comfortable in your hand.

Langley sells stainless steel shucking knives at Tide and Vine with a slip-free handle and guard to protect fingers from bumping and scraping against rough shells.

First-time shuckers may prefer using a tea towel or gloves to grip the oyster and provide some additional protection, but Langley warns they hinder shuckers’ abilities to pick up on important cues when opening oysters.

A lesson in oyster anatomy is required. The top of an oyster is flat. The bottom tends to protrude more and is called the cup. It’s the part of the shell in which the oyster is served.

The hinge is the pointiest and hardest part of an oyster’s armour. This is where you go in with your shucking knife because there’s less chance of the shell breaking.