The Hands that Feed Us: Linton Blackwood

Posted May 16th, 2017 in Eating Niagara, On the Farm, The Hands That Feed Us, Food Stories 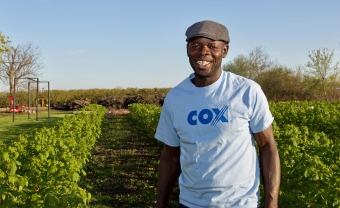 Linton Blackwood is a self-taught musician who comes to Canada from Jamaica for four months a year to work on a fruit farm in Niagara Region.

If he feels up to it after putting in 12 hours on the job, Blackwood will play some gospel music. But there’s dinner to eat first. And maybe an episode of Walker, Texas Ranger to watch with his three roommates before going to bed and doing it all over again in the morning.

“Nobody teach me,” Blackwood said about the keyboard in his lilting Jamaican accent. “It’s a gift,” he added, tapping his index finger to his temple.

Blackwood doesn’t use sheet music when he plays. He follows the notes in his head, playing by ear and by memory. When he was 16, he fashioned some wood and string into a homemade banjo and taught himself to play.

Blackwood, now 45, and his two brothers mastered the makeshift instrument. He graduated to the bass and the guitar, and somewhere along the way, the keyboard.

There are videos of him jamming with friends and visitors back home. His fingers find their way on the neck of an acoustic guitar like a sojourner finds his way home.

As he talked, he swiped his phone to find a photo of him in a white suit with an ethereal cast. His two young nephews stand next to him, wearing bright, satiny shirts kept in check by black suit vests.