Posted May 6th, 2017 in Beyond Niagara, Food Stories 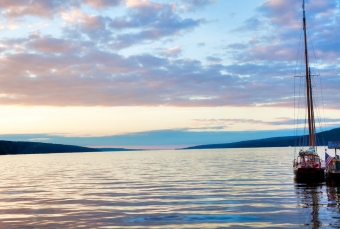 Road trips are as much a part of summer as t-shirts and sunscreen. A road trip to the Finger Lakes offers endless possibilities for a memorable getaway. A version of this story appeared in Niagara Life Magazine.

I’ve been in love with The Road Trip since being rapt by a documentary about Route 66. Peter Fonda was fittingly the narrator.

I was in my early 20s and filled with torturous amounts of wanderlust. I wanted to put rubber to asphalt that night and take in Americana at its finest. We never did the family road trip as a kid. The farthest we ever drove together was the three hours to our cottage near Oliphant. There was a lot of "How long until we're there?" especially on rainy days with our Newfie, Bismarck, in the back of my dad’s station wagon, drooling on my sister and I, and fogging up the windows.

But I started to realize the joy that a getaway by car could offer when I was 19 and drove to Newfoundland with my mom. Arguments about music aside (she cringed at my choice of the Beastie Boys; I rolled my eyes at her selection of 10,000 Maniacs), road tripping was pure bliss.

The sense of freedom that came from the open road unfurling before us was intoxicating. The change of scenery at every stop was eyeopening. The agony of a full bladder with no rest stop in sight is also something a person never forgets. I’ve since learned you don’t have to venture far to feel like you’re escaping the day-to-day. Bonus: short roadies mean less worry about mapping those rest stops.

It’s even better when a weekend away, compliments of a full tank of gas, doesn’t require negotiating Toronto traffic. Give me the American border over the 401 at rush hour any day. Give me the Finger Lakes. It’s New York’s Niagara, only three hours away depending on your final stop. Here are a few ideas of where you might want to put the car in park.

One of the residents at Farm Sanctuary, which offers a great place to spend a day and night in the Finger Lakes.

Where to Stay in the Finger Lakes

Bed and breakfasts abound for visitors wanting a more personal experience and the chance to connect with locals. There are also plenty of inns and hotels to lay your head at night, some with the charm and intimacy you expect of a B&B.

Conviviality rules at Bragdon House B&B. The century home has been converted to four private suites offering views to Seneca Lake, the largest of the Finger Lakes.  Mother-daughter team, Diana Wenz and Jennifer Foe run Bragdon House. They'll happily point visitors to the best attractions in Geneva and beyond, all while doing up breakfast, made-to-order. Dexter, the resident cat, is another creature comfort of this spot. He likes being invited into visitors’ rooms for a schmooze.

Opulence beckons a little farther down the road. Belhurst Castle, on the outskirts of Geneva, is a resort offering dreamy accommodations in a stone castle that dates back to the 1880s and overlooks Seneca Lake. It features a spa, upscale dining room, and winery that’s worth the visit even if staying elsewhere overnight. It’s the whole package, really.

The other end of Seneca Lake offers something more bucolic. Farm Sanctuary, just outside of Watkins Glen, has cabins with a view to rolling hills and the faith-restoring operations of a refuge for goats, sheep, chickens, cows and horses rescued from horrifying circumstances. Farm Sanctuary offers a joy-filled way to spend the day even if you don’t stay the night.

Beautiful food is everywhere in the Finger Lakes. Don’t leave without trying some of the regional specialties, like beans and greens. It's a local take on the brothy Mediterranean classic of cannellini beans and wilted escarole. They’re ubiquitous on menus here and slurping is mandatory.

Viva Taqueria in Ithaca is the perfect spot for a pint and a plate of nachos. This Cal-Mex joint is always hopping thanks to Ithaca’s college and university crowd. So don’t expect quiet here, just laid-back.

In Watkins Glen, The Wildflower Café serves a menu of eclectic and thoughtful pub fare paired perfectly with suds from Rooster Fish Brewing, the café’s sister beer-making operation. They don't forget about vegans and vegetarians here, either.

Nature is the main attraction in the Finger Lakes. It’s impossible not to drive from one end of a lake to the another without pulling over to take in one of the many waterfalls that dot the route. Stunning panoramas also seem to emerge around around every bend in the road.

Taughannock Falls State Park in Ulysses near Ithaca offers a beautiful but popular hike that ends at the highest, single-drop waterfall on this side of the Rockies.

Watkins Glen State Park is stunning and gets more gorgeous with every twist and turn hikers take on the Gorge Trail. Make sure the memory on your camera phone is clear because you’ll fill it quickly with jaw-dropping captures above, below and all around you.

The lakes themselves are no slouches, either. Many offer walking trails along their shores for visitors to get an up-close view. Boat tours are plentiful with Seneca, Canandaigua, Cayuga, and Skaneateles lakes offering their own versions. The lakes can also be experienced by canoe, kayak and paddle board.

Wineries with sweeping views to vineyards and vintages to sample are plentiful in the Finger Lakes.

With a wine trail and an ale trail, there’s no excuse for being thirsty in the Finger Lakes.

Those familiar with the wine industry at home in Niagara describe the Finger Lakes’ edition as similar to Niagara 20 years ago. It’s young and finding its way, with some wineries still relying on California juice to pad out vintages.

But many Finger Lakes wineries grow and bottle local hybrids, such as Cayuga. Plant breeders at Cornell University in Ithaca developed them specifically for production in the area. Oenophiles will find other varietals that aren’t common here, such as Lemberger and Rkatsiteli.

Dr. Konstantin Frank Wine Cellars in Hammondsport on Keuka Lake is a mandatory stop for wine lovers. Konstantin Frank is a pioneer of the Finger Lakes wine industry. In fact, he can likely be credited with its existence. He’s the reason European wine grapes are even grown here. Make sure to leave room in your suitcase for bottle or two of this winery’s lip-smacking Chardonnay and crisp, bright Rkatsiteli.

Ithaca Beer Co. is a creative craft brewery doing a diverse portfolio of suds to please any palate. Its Flower Power IPA is popping up well beyond the Finger Lakes, attesting to the brewery’s knack for nailing it. Unlike other craft IPAs, this one doesn’t taste like its part of a hops arms race. It’s infinitely drinkable rather than being bitter for the sake of being bitter.

Miles Wine Cellars is worth a stop just for the serene setting with so much history. Some of the players in Miles’ past have apparently never left. Make sure to ask about some the winery’s other spirits when you step up to the tasting bar. The stories are gripping, and may leave you white-knuckling your glass of red. Evan Miles, who has a hand in the winemaking, is a graduate of Brock University’s oenology program.

Watkins Glen International race track has car races every month, and is a stop on the NASCAR circuit. Thanks Shutterstock.

FLX: Other Points of Interest

The Corning Museum of Glass is filled with eye-popping displays showing the evolution and beauty of glass through the ages. More than 45,000 glass objects, some dating back 3,500 years tell the story of this revered, yet practical material. The museum, located in Corning, is brought to you by the eponymous glass and ceramics maker and is family-friendly.

Even if you’re not in the market for kitchenware or furniture, a stop at Mackenzie-Childs in Aurora is in order, just to take in the sheer beauty of what they do here. The hand-painted ceramics and furnishings are unlike anything anywhere else.

Watkins Glen International is calling card for car race fans. Many big-name race circuits, including NASCAR and IndyCar, include a stop here during their seasons. Opening weekend is in April with drivers burning rubber there at least one weekend a month until September.