The Hands that Feed Us: Agapito Alvarado

Posted Apr 18th, 2017 in Eating Niagara, On the Farm, The Hands That Feed Us, Food Stories 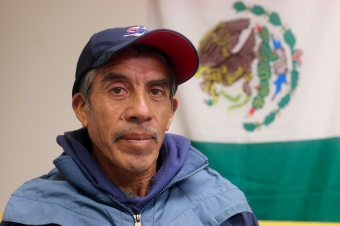 Agapito Alvarado is a seasonal agricultural worker who comes from Mexico to work at a Niagara winery for eight months of the year.

Maybe this year. Maybe next. The seasonal agricultural worker from Tlaxacala in southwest Mexico has a son to finish putting through university first.

“I’d like to come just one or two more years,” Alvarado, 56, said. “The reason I come here is because one of my sons is starting university and I would like him to finish. In order for that to happen, it takes one more year.”
Alvarado has been coming to Ontario to work on farms for 27 years. That’s more than half as long as the federal Seasonal Agricultural Workers Program has existed to ensure farmers have enough labour to plant, prune or harvest crops that can’t be handled by machine.

The program launched in 1966 when Harold Smith, then the patriarch of Vineland fruit farm Cherry Lane, came up with the idea of hiring foreign workers to help with the growing season. It would mean a stable workforce for him and other farmers when they needed it most.

At the time, manual labourers were recruited from Jamaica where unemployment was high. The program was eventually expanded to Mexico and other Caribbean countries.

Today, more than 2,800 men and women come to Niagara for contracts that last up to eight months a year.

Alvarado was unemployed and curious when he first came to Canada in 1990.

“At first sight, Canada seemed so beautiful and very clean,” he recalled. “It was a nice place.”

But the nursery job that brought him here was hard work, and an injury on his first day left him worried his tenure would be cut short.

Read the rest of the story about Agapito Alvarado »