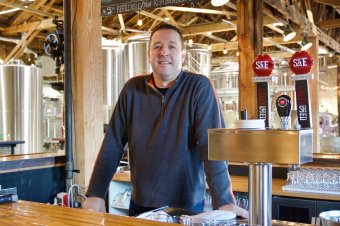 Shawn & Ed Brewing Co. is a craft brewery in Dundas, Ontario, that was founded by Ed Madronich, who owns Flat Rock Cellars in Jordan.

The saying goes that it takes a lot of beer to make great wine.

But one Niagara vintner is proving the opposite true. Ed Madronich, proprietor of Flat Rock Cellars in Jordan, is showing that it also takes top-notch tipple to turn out noteworthy suds. He’s doing it with The Shawn & Ed Brewing Co., the 10-month-old brewery that he opened in an old Dundas curling and skating rink with university buddy Shawn Till. The venture fulfils a nearly lifelong dream the two discovered they shared while shooting hoops for McMaster University’s basketball team some 25 years ago. And even though the beverage lineup at the brewery, known to locals as “the Shed,” is more hoppy than tannic, Niagara’s influence on this heady pursuit in a Hamilton suburb is undeniable. “I believe there’s lots of synergies between the wine business and the beer business,” Madronich said. “I’m leveraging both for this to be successful.” Madronich flouts all those old wives’ tales about never mixing beer and wine with a lager-heavy roster that shows the two to be a perfect pairing. Take the flagship Shawn & Ed brew, BarrelShed No. 1. This ruby-red beauty has sweet caramel notes and gets its body from aging in Flat Rock Cellars Pinot Noir barrels. Since batch No. 1, some of each BarrelShed brew has been set aside to use in the following ferment. The result is glorious — rich and layered. “I believe over time, it adds complexity,” Madronich said about the BarrelShed’s secret ingredient. “It has the complexity of wine. BarrelShed is our globally unique beer. There’s nothing like it in the world.”