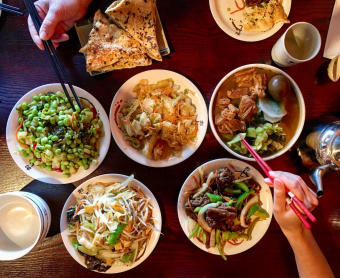 Strip Mall Gems is a series of Eating Niagara, my column that runs in the St. Catharines Standard, Niagara Falls Review and Welland Tribune. This is my final instalment in the series and includes readers' choices.

It was about a year ago at this time that I walked into a burrito joint in a Niagara Falls strip mall, looking for lunch.

I was there on chef Michael Olson’s recommendation and held out high hopes for my sweet potato wrap at a place that was nothing if not intriguing. It was Don Wong’s Mexican Asian Food Mart.

How could I not be curious?

As I waited for my order, I learned that owners Cyndi Wong-Lorenzo and Attilio Lorenzo had only been open three weeks. They moved to the region from Toronto, beckoned by a pace of life more meandering than big-city maniacal.

Niagara Falls, where Lorenzo grew up, promised to be the perfect place to raise the couple’s own family. Their new takeout venture, a more multicultural riff on what they were doing in Toronto, would enable them to do it.

As I took my first few bites of burrito, filled with generous pieces of sweet potato and splotches of guacamole, I wondered how many people were like these two, pinning their hopes on a shoebox space in those bastions of mundane urban architecture we call The Strip Mall.

And how many of us just drive by, thinking ‘One day I’ll stop in’ or ‘I wonder if that place is any good?’

My strip mall gems series was born at that moment.

This past year, I stretched my freelancer’s bank balance and my waistline to tell the stories of some of Niagara’s dining treasures; some fancy, some no frills.

They were stories of chefs trading in round-the-clock jobs in other people’s kitchens to put their own stamp on breakfast and lunch, and have time at night for their families.

They were tales of people with plum day jobs packing them in to take a chance on a dream. Of new Canadians who longed for a taste of home and when they couldn’t find it, invited us to their tables to share their experiences and become part of their new communities through food.