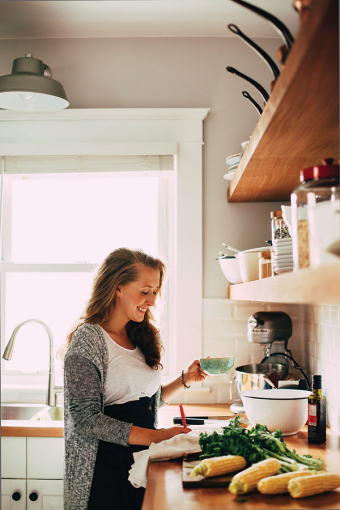 Laura Wright of the The First Mess food blog has written her first cookbook of the same name. The Niagara blogger talks about all that went into it.

The first thing Laura Wright did when she went vegan was master the art of making dessert.

The Thorold-based food blogger wanted her plant-based versions of those after-meal sweets to be as good, if not better, than their counterparts heavy with dairy and eggs.

The pinnacle would be emulating her family’s favourite coconut cream pie, the recipe for which was found years ago on the back of can of condensed milk.

Wright knew she nailed it when her mom’s critique of her plant-based tart didn’t include the usual refrain that it needed more butter.

“When I make this, they say this is just as good as that (condensed milk version),” Wright says.

Starting thursday, Wright shares her recipe, rich with full-fat coconut milk and sweetened with guilt-free maple syrup, in The First Mess Cookbook: Vibrant Plant-Based Recipes to Eat Well Through the Seasons (Penguin, $35).
The new release is Wright’s first book, named after her hugely popular food blog that champions all things fruit, vegetable and whole grain. But much like her family doesn’t miss the butter in her coconut pie, readers aren’t likely notice the food groups left out of Wright’s hard-copy collection of 125 recipes.

That’s because Wright’s MO for getting people to eat her plant-based creations hits all the right notes with stunning photography and earnest storytelling. It’s not about making anyone feel badly about their usual dietary choices, which is why she uses the V-word as little as possible in her book.

“I want to draw people in and have them stay there because they want to be there.”

Truth is, I haven’t wanted to be anywhere else since I got my review copy of The First Mess Cookbook a couple of weeks ago. Her recipe for lemon curd is already buckling from ingredients I’ve splattered on the page. This book is all I’ve been eating from this past week thanks to straight-forward recipes that deliver exactly what they promise.