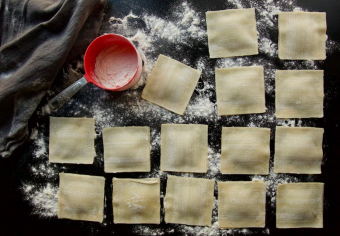 Turnip-Apple Ravioli with Miso-Brown-Butter Sauce is an Asian-influenced spin on an Italian classic that's full of fresh, comforting flavours.

This post was sponsored by the Ontario Apple Growers (OAG). What does that mean? I was paid to develop this recipe for Turnip-Apple Ravioli with Miso-Brown Butter Sauce. The recipe and story I’ve told below are my own, without input or editing by OAG.

I don’t think I’m being bold by stating turnips don’t have the same cachet as, say, kale.

Really, when was the last time you made a beeline for the humble root vegetable at the grocery store? If you answered, ‘Just the other day, in fact,’ then you and I need to hang out.

I love turnip. I don’t buy them nearly enough but I do sing their praises often. They’re lovely to look at, for one, with their two-tone purple and cream complexions. Baby bunch turnips, those pure white orbs against verdant greens, are stunning, too.

Then there’s that taste, with hints of radish and mustard kept in check by the odd apple note. Oh, and turnips are budget friendly, going for less than a dollar a pound in most places.

Are you feeling me yet on the turnip?

They're also incredibly adaptable. They lend themselves to all kinds of flavour pairings from simple, comforting ones to more exotic. Really, the turnip is like the workhorse of the vegetable world.

Speaking of workhorses, Steve Martin of Martin’s Family Fruit Farm falls into a similar category. The seventh generation apple grower and his Waterloo operation are tours de force when it comes to growing, packing and marketing a fruit that just happens to work well with turnip.

I got to tour Martin’s massive packing facility a few weeks ago as a scaled-down, winter version of his staff washed, bagged and boxed Gala apples for major grocery chains. The fruit was harvested last fall but had been kept in

ontrolled-atmosphere storage until it was ready for shipping.

All apples that go through the line at Martin's Family Fruit Farm are checked manually and mechanically for imperfections multiple times before being packed and shipped to grocery stores.

If sinking your teeth into a month’s old apple sounds as appealing as forgoing kale for turnip, rest assured the Martins have keeping their harvests fresh down to a science. That controlled-atmosphere storage protects fruit in an air-tight chamber with minuscule levels of oxygen. Ripening is slowed to “almost nil” until the chamber is opened and the apples are ready to be shipped to a supermarket near you.

Martin’s is a huge operation that started as a mixed farm of 1,000 acres in 1820. It began morphing into a behemoth apple orchard in 1974 when a horticulturalist from the former Yugoslavia convinced Martin’s father, Leighton, to plant apple trees. He cautiously started with five acres and put a sign at the end of his lane come harvest that he had apples for sale.

The small operation proved mighty. The Martins got so busy, they planted more trees. And then bought another farm in Port Burwell. They grow nearly 1,400 acres of apples today, and they pack and market for farmers who don’t want to do that part of the business themselves. “Some of the best growers in Ontario, they want nothing to do with the public, the marketing side,” Martin explained. “But they’re really good growers who turn to people like us… who pack them out and do the marketing for them.”

A Chip off the old apple

They've built a pretty plum business, really. There has been one problem, however: what to do with all those less-than-perfect fruits? One option is to turn them into juice but the return isn’t much better than if they were left to compost.

Misshapen, small or blemished fruit isn't the apple of consumers’ eyes, but it is ideal for slicing and drying. Five years ago, the Martins began turning out bags of apple chips at a 19,000-square-foot processing plant in nearby Elmira. Martin’s Apple Chips are now fixtures in grocery stores and a certain coffee chain with a mermaid mascot. The brand is even expanding to the U.S. after conquering the Canadian market. “We took a huge a chance,” Martin said about the venture. “We broke all the rules of breaking in a new product. We’ve been amazed at the success. It’s been a huge product in Canada. It’s gone far beyond anything we imagined five years

Something else unimaginable was finding Mutsu apples in late January. I fell in love with them last fall when I found some beauties at a local corner store. I haven’t seen them since, though, so I figured my affair was a fleeting one, at least for this year.

But then the Martins have that controlled-atmosphere storage, so I ended my visit with a stop in the farm store and bought a big basket.  I knew they Mutsu's balanced flavour would be the perfect foil for some turnip in a ravioli that has more Asian influence than Italian.

Together, they’d be enhanced by ginger and scallions, countered by a splash of rice vinegar, and made rich in an unctuous brown-butter miso sauce.

I relied on simple wonton wrappers for this turnip-apple ravioli with miso-brown butter sauce instead of making my own pasta. I fell comfortably into the rhythm of filling and sealing, one by one, instead of struggling with rolling out sheets of dough. That way, I didn't have to be a workhorse to make them.

Turnips and Mutsu apples bring out the best in each other in this Asian-influenced spin on ravioli. Despite cheating by using wonton wrappers for the ravioli, this isn't the meal to make when you're rushed but rather a Sunday dinner or when you feel up to doing something more hands-on. That said, the stuffing can be made the day ahead to help along the process.

For the Miso-brown butter sauce

Steam peeled and diced turnip until fork tender, about 10 minutes.

Drain turnip and melt 2 tablespoons of butter in a skillet over medium heat. Sauté green onions until they soften, about 1 minute. Add ginger, stirring until fragrant, about 30 seconds.

Add turnip, combining well with green onions and ginger. Spread turnip evenly in single layer, stirring only occasionally to let the turnip brown slightly on each side (about 5-7 minutes total).

Remove from heat and purée in a food processor with diced apple.

Bring a large pot of water to a rolling boil, then reduce to a simmer.

Meanwhile, prepare the ravioli. Scoop two teaspoons of the turnip mixture into the middle of each wonton wrapper. Brush the outer edges of the wonton wrapper with whisked egg, then cover with another wrapper, pressing the edges firmly to seal. Set ravioli onto a lightly floured baking sheet and set aside until ready to cook.

Next, make the sauce.

Swish and swirl the butter in the same skillet used for the turnip mixture until the milk solids separate, get foamy and start to brown. Be careful here because they can burn quickly. You want there to be golden brown flecks that give off a nutty smell.

Remove from heat and whisk in flour until smooth. Add soy milk, water and miso paste, whisking until smooth and free of lumps. Add mirin and rice vinegar, and return to burner on low heat to keep warm.

Now cook the ravioli in small batches in simmering water, about 2-3 minutes. The ravioli will float when they're done. Remove from water with a slotted spoon and serve immediately, drizzled with sauce and topped with green onions, if you choose. Don't cook the ravioli all in one shot because it will clump together when drained and tear or fall apart when serving.

Mutsus, also known as Crispin, lend themselves well to this recipe. But another balanced apple with sweet and tart notes, such as Granny Smith or Northern Spy would also work well.

Also, it's been argued that all ravioli stuffing should include a starch. I found that neither my turnips nor my apples were too juicy to require it. But if find you have turnips with lots of moisture, swap one cup with white potato instead, or add flour, one tablespoon at a time, until you reach desired thickness.

To make this recipe dairy-free, use Earth Balance buttery sticks instead for the sauce.