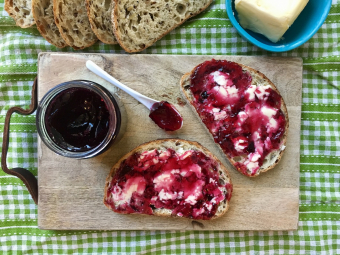 Southridge Jam Co. is a small batch jam and jelly maker in Niagara. It's a social enterprise helping people who come through the Southridge Church shelter.

This story originally appeared in Edible Toronto magazine, Winter 2017. Other than the main photo, all images were supplied by Southridge Jam Co.

A sweet scent spills from the kitchen at Southridge Community Church in Vineland, Ontario, and it’s unmistakably that of Concord grapes and sugar joining forces to make jelly.

For Scott Cronkwright, the aroma is much more than a preserve-in-the-making. It’s a smell that triggers happy memories from days long past and, especially, hope for days – and years – ahead. Cronkwright is one of about a dozen people who make up the current cohort of The Southridge Jam Co., a small-batch-preserves operation launched earlier this year to support homelessness programs, including a shelter that is run out of the St. Catharines location of Southridge Community Church.

As the guy stirring the pot, measuring sugar, or doing whatever job is required of him to turn grapes into peanut butter’s soulmate, Cronkwright relishes the scent wrapping itself around him, sticking to his clothes, his hair, his skin. “The smell completely envelops me,” the 55-year-old says. “It takes me back to my grandmother’s kitchen. It takes me back to my childhood. Every jam that we produce has this incredible memory generating from it.” But it’s what happened between those moments playing kitchen assistant to his grandmother as a boy and January 2016 that ultimately led him to a church kitchen to make jam. Cronkwright is a survivor of childhood sexual abuse. He grew up to work a mixed bag of entertainment, writing, and restaurant jobs, got married, and had children. And for nearly half of his adult life, he existed as a “functioning opiate addict.”

Scott Cronkwright (left) works on a batch of grape jelly in the Southridge Jam Co. kitchen.

From HOme to HOmeless

The drugs were prescription meds intended to help him recover from surgery he had fifteen years ago, but he continued taking them to ease the pain of unhealed wounds inflicted upon him long before. His addiction ruined his marriage. It estranged him from his children. And last January it led him to Southridge’s homeless shelter after he finished a college tourism program and his residence lease ran out. A counsellor at the shelter steered him towards detox and eventually recommended that he work in the church’s new venture, the jam company. The tagline for The Southridge Jam Co. is “Spreading Hope,” a message that appears on the label of each of its preserves. The real genius is in how it does that: by providing a home, a friend, and a purpose to those in its kitchen.

The church had been providing homeless services for eleven years before the idea for such a social enterprise came to mind. During that time, shelter staff witnessed incredible life changes in many who had turned to them for help, recalls Tim Arnold, Southridge’s outreach director. People were leaving behind lives on the streets, finding housing, and becoming welcome members of a kindred group.

The easy part of the transition was moving from the shelter to a home to call one’s own; community integration was more difficult. Finding a job was a non-starter for those lacking skills, and building a steadfast support network was usually no easier for those who had once existed on the fringes of society. In many such cases, people often found themselves returning to the shelter, unable to achieve the settled life they longed for. “The question [for us] was how do we continue the journey with people once they walk [out] the doors of the shelter,” Arnold explains.

Launching a social enterprise was the answer. A commercial venture would generate revenue to support and grow Southridge’s social programs while fostering relationships that would lessen the chances of someone returning to the shelter. For others, it would get them job-ready. For all, it would provide a way to contribute, which is something every shelter resident wants most, according to Arnold. The Southridge team considered baking and selling bread, running a catering company, even operating a bistro. The proverbial light bulb didn’t turn on, however, until someone offered Arnold some simple advice. “He said, ‘Look around you. Look at the opportunities that already exist,’” Arnold recalls. A quick inventory revealed the church’s relationships with local fruit farms, thanks to the outreach it does with seasonal agricultural workers every summer. Farmers would also regularly call Southridge during the growing season to offer the shelter seconds from their harvests which, with a little handiwork in the kitchen, made for good eating. Making jam suddenly seemed obvious – even better, since it “engages people in non-specific roles.” In 2014, a business plan was drafted and government grant applications were made. The Southridge Jam Co. officially launched this past September with a line of three preserves: strawberry and peach jams and grape jelly. The sweet trifecta is made with local fruit by a team of volunteers and former shelter residents like Cronkwright, who’ve been recommended by Southridge staff to participate for sixteen weeks of unpaid job training.

The Southridge Jam Co. is Born

The program requires that they spend two days each week making jam. Some participants have gone on to find jobs elsewhere. Others, like Cronkwright, have stayed on, graduating from only kitchen duties to also learning about sales and promotion of the preserves online and in a few local retail shops. All the while, many are developing marketable job skills. “But I also want this to be a program for people who will never be job-ready,” Arnold stresses.

So far, The Southridge Jam Co. has sold more than three thousand jars filled with premium fruit, most of it donated. “At the end of the day, people want to be part of something great,” Arnold explains. “I’ve been involved with homelessness a lot of years and this is truly a good news story. I can’t tell you how many times I go to farms for seconds and they’ve been like ‘Are you kidding?’ They give the best of the best.” The jam company also hosts corporate team-building events, with participants spending a day learning the art of preserving from Cronkwright and other graduates of the program. They get paid to teach people they might one day have passed by on the street; it’s both a new and an empowering experience. “It’s a place where our people are respected and listened to. That’s been a lot of fun and our participants have really loved it,” Arnold says about the team-building program. “When you’re in a position of privilege, you forget what it’s like to win sometimes. I’m hearing from folks in the program that this is the first time they’ve been part of something successful. Personally, it’s just made me realize I take that for granted – the importance of success, of being part of something that’s working.”

A Sweet and Satisfying Endeavour

That feeling is shared by volunteers like Vicki Briscall, who helps in the jam company kitchen. Briscall started volunteering in the shelter kitchen eleven years ago, feeding her own desire to “cook good food for people.” She leaves the precision work of preserving – the measuring of ingredients or the filling of jars – to others, opting instead to prep and cook fruit. Together, the jam makers are a proverbial well-oiled machine when they get together. “There’s a solidarity there; we come together, we are one,” Briscall says. Throughout her years volunteering, she’s seen people leave the shelter and return. She’s also seen her own preconceptions change with every engineer, chef, or widower who’s lost everything and comes through the shelter door for help to get it all back. Briscall is hopeful each jar of jam sold will change their prospects. “Maybe we can work toward a time when there will be a lot fewer people who are homeless,” she muses. “When you hear people’s stories, that’s when you think the jam is going to be extra good. It has to be.” The sweetest part of the venture for Cronkwright has been reconnecting with his three children. The motor skills he’s honed have helped him find his groove musically. He’s started drumming again. He also has confidence in himself and his skills, and he has a stalwart social network that grows tighter and stronger with each batch of jam they make together. Cronkwright will tell you he owes everything to Southridge and the jam company. “I’ve wondered, ‘Can I re-engage?’ This has afforded me that incredible life change. It’s afforded me the stability you don’t have in addiction because it’s chaos,” he explains, his eyes glassy with emotion. “Life circumstances happen. We all have different stories. When we see product sold, it’s… I’m at a loss for words. What all of us had to go through to get here, this is a great social enterprise.” The Southridge Jam Co. www.southridgejam.com | (905) 682-7978 x 130 Products can be purchased online or at Cherry Lane or Stratus vineyards.