Meet four Niagara food entrepreneurs who want to feed you 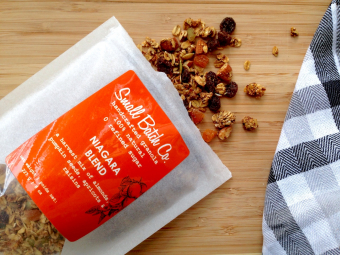 Niagara is fertile ground for launching a career in food. Meet four Niagara food entrepreneurs who are doing just that and they want to feed you.

This post was sponsored by the Greenbelt Fund. What does that mean? I was paid to write about a topic of my choosing inspired by the most recent story published in The Toronto Star related to Ontario's Greenbelt. The ideas, interviews, writing and editing are my own. The Greenbelt Fund fact-checked all information, including numbers and statistics, about the Greenbelt in this post before publication.

There’s more to education than the three R’s.

At Mohawk College in Hamilton, there are also the three P’s: production, preparation and procurement. They aren’t related to anything learned in a classroom. Instead, they’re all about what’s on students’ plates come lunch, and they offer a lesson about the importance of local food.

Production teaches students about growing food. Preparation is about cooking what they grow. And procurement is about buying it, particularly food with origins close to home.

With the help of a $100,000 grant from the Greenbelt Fund, Mohawk is leading a project to create a common model for that third P, local food procurement, for Ontario’s 24 community colleges.

Public institutions from schools and hospitals to universities and government offices have talked for years about how they crave more local food in their cafeterias. Here at home, Brock University sources regional ingredients when it can for the daily offerings served on campus. The French fries there, which were a real weakness of mine when I worked at the university, are made with potatoes that have local roots.

This weekend, a story in the Toronto Star talked about some of the  inroads made when it comes to getting local food into schools, and the recognition by students that cooking and eating good food grown nearby matters as much as math class.

Offering local food doesn’t merely nourish students’ bodies. It feeds their imaginations and plants the seeds for fruitful careers in food. And Niagara, which is on the southwestern periphery of the Greenbelt, is fertile ground for such career ambitions.

The Greenbelt is two million acres of land protected from urban sprawl.  It’s bigger than all of Prince Edward Island. That makes it one big insurance policy we’ll have some of the best farmland to continue providing us many local meals in the future. It also makes it one giant muse for people pursuing careers in food.

More career goal inspiration: One in nine Ontarians — about 11 per cent — are directly or indirectly employed by the agri-food system. And that system generates more than $63 billion of economic activity, the Star reports. Meanwhile, every dollar of the $160 million the province has invested since 2003 to promote local food has meant a $13 increase in local food sales.

It all adds up to a promising way to make a sustainable living for those passionate about feeding people.

Here are four young Niagarans living the local food dream, all to the benefit of our economy and our taste buds.

In three short years, she’s gone from making and selling local fruit smoothies and snacks at the Niagara-on-the-Lake farmers market to building a successful brand of granola that’s in demand in 90 stores across Ontario. She also keeps us healthy and hydrated with raw, cold-pressed fruit and vegetable juices she sells at her two shops here in Niagara.

The farmers market proved to be the perfect place to fine-tune her business plan. What started out as a fun way to spend her weekend turned into a viable way to earn a paycheque when The Harvest Barn grocery stores picked up her granola to sell year-round. (Get your hands on some of her Niagara Blend!)

Nicole, who was living in Toronto at the time, rented affordable commercial kitchen space in Niagara and spent her weekends preparing and packing granola. Demand for her blends of oats, seeds and fruit grew and the success of her Small Batch Co. line ultimately convinced her to leave Toronto for Niagara to pursue her career in food.

Nicole thirsted for something more, however. She could easily find juice shops selling the raw, cold-pressed concoctions she loved to drink in Toronto. In Niagara, there was no such thing, so she saw an opportunity and ran with it, opening juice shops in Niagara Falls and St. Catharines. She presses organic produce from Pfenning’s Organic Vegetables in New Hamburg, near my former stomping grounds in K-W. Niagara peaches and cherries play starring roles in her blends, too, when they’re in season.

Now her sights are set on expanding so she can sell more healthy foods, apothecary items and offer monthly workshops at her stores.

“Small Batch Co. is trying to add something fresh and healthy to the Niagara region,” Nicole says. “Too many people forget the abundance that is around us, as well as all of the produce Ontario has to offer.

“I hope other young entrepreneurs can look at my story and find inspiration to put their ideas into action. You might not have limitless capital at your disposal, but if you have ambition, creativity and a willingness to put in the long, hard hours, you can make it happen.”

Inspiration can also be found down the road in Beamsville at Dillon’s Small Batch Distillery, the craft still run by Geoff Dillon.

Like Nicole Pajak, Geoff wasn’t born and raised in Niagara, but the biochemist by training saw the potential for creating award-winning spirits here thanks to our local agriculture, especially our world-class ability to grow grapes.
In its early days, Dillon’s used excess bulk wine and grapes in its ferments, giving growers a market for products that didn’t have a lot of earning potential. Geoff has contracts today with five local grape growers to provide the fruit for his vodkas and gins. The Unfiltered Gin 22 is some of the most beautiful stuff you’ll ever sip.

He grows wormwood and other botanicals on site to make his absinthe and infuse his other spirits. And he’s dedicated to using only Ontario rye in his whisky.
Would he have been able to do this elsewhere?

“Niagara is so intertwined with our story that I don’t think we could have done what we have without the Niagara growers,” Geoff says. “We work with so many farmers to source our ingredients that separating the two would leave us with a completely different story.”

Amanda and Ryan Thiessen, and their daughter Sydney. Photo by Nathaniel David Johnson.

Some people might have been surprised when Amanda and Ryan Thiessen decided to become farmers seven years ago.

After all, neither were born to farming families. But the desire to work the land and let their lives take root in every vegetable seed they planted was unshakeable, and as a member of their winter CSA, I’m grateful that was the case.
There was a learning curve for these Niagara natives who started by renting one acre of land in Jordan in 2010 to grow vegetables and a small flock of chickens and muscovy ducks. The following year, they expanded to 10 acres before finding their happy place: a 2.5-acre plot in west St. Catharines. They also work another 2.8 acres of rented land, which helped supply weekly shares of vegetables for 100 families in 2016, mine included. In 2017, they expect their summer and winter CSA program to hit 150 customers.

It all has Ryan dreaming of the day he won’t need to work an off-farm job to support his farming habit. He doesn’t have his two weeks’ notice written yet, but the day is getting closer and I couldn’t be happier for him.
It hasn’t always been sunshine and timely rains, however. Sure, the couple has had access to high-quality land in Niagara’s section of the fertile Greenbelt. They’ve also benefited from additional marketing opportunities through the Greenbelt Fund, and Greenbelt farmers markets. Even with that, Ryan admits local food can be tough sell in Niagara, especially at this time of year.

“The Niagara area struggles to support small local growers, especially compared to the movements we see in Kitchener/Waterloo and other areas,” Ryan says. “Everyone is excited for local Niagara fruit in summer, but offer local Niagara vegetables in winter and they won't even look at you, even though your carrots might as well be as good as summer peaches.”

As a peach aficionado who’s been a member of the Thiessens’ winter CSA for five years now, I can say those sweet winter carrots are definitely the bragging right Ryan makes them out to be.
They are all my two-year-old talks about when I tell her we’re going to see Ryan and Amanda for our vegetables. We eat them like our farm stand peach purchases, too — scarfing them down like the candy they are on the drive home.

There’s no doubt Niagara is a culinary destination and it’s because of chefs like Anthony Grecco.

I first met Anthony a year ago when I was invited to write about a monthly Les Marmitons Niagara cooking club dinner. He was the chef leading a group of self-professed food nerds through cooking and eating a four-course meal.
I was entirely smitten with his dedication to creating cuisine that truly reflects Niagara in every season. He also won me over with his passion for teaching people about the bounty available was evident in every dish he guided his protégés through.

That zeal for Niagara food has made people realize they can find beautiful fare beyond the region’s well-worn tourist routes. Zest has become the place to go for locals and visitors alike under Anthony's watch.

Those farther up the food chain recognize what he's doing. The Ontario Hostelry named him to its Top 30 Under 30 in 2012. He won silver in the 2015 Food Day Canada Good Food Innovation Awards. Last year, he captured gold for a Food Day Canada menu that featured dreamy-sounding Fenwick cauliflower and buttermilk bisque with smoked sockeye and Featherstone Verjus curd with Mennonite-grown blackberries.

A dish by Anthony Greco, prepared and served at a Les Marmitons Niagara meeting.

Anthony cooks to “influence peoples’ lives — people I work with, guests, other chefs, farmers. I really want to invoke a sense of purpose to what we all do.”

He’s also the proverbial kid in a candy store when it comes to sourcing local produce for his ever-changing, ingredient-focused menus at Zest. His list of local suppliers is as fulsome as his ideas for what to do with the edible inspiration they provide: Rumar Farm; Cream Street Garlic; Grimo Nut Farm; Haist Fruit Farm; Johnson Farm; and Janssen Specialty Produce in Simcoe for white asparagus, to name a few.

The focus is on fresh in summer. In winter, Anthony uses what he’s preserved, cured and dried during the height of the season to pad out what’s available locally. Abundance is his only real challenge no matter the time of year, he explains. “The difficulty is narrowing it all down to write a menu.”

Local farmers and diners are like me are grateful for Anthony’s efforts to showcase the best of the region.

“When I write a menu during the summer months, I sometimes need to hold back from listing where everything comes from. It gets overwhelming for the guests to read,” he admits. “But when I am able to go and chat with a guest about the menu or about the food, I can tell them where everything on that menu comes from… . I think it has helped guests really make the connection to where their food comes from. It acts as a conversation starter for guests to chat about the restaurant and about ingredients that they probably have never seen before or won’t see again until the next year.”