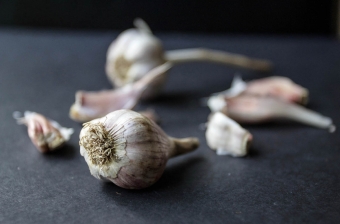 Sopa de Ajo is a Spanish garlic soup that's like medicine in a bowl. It packs plenty of garlic's healing superpowers and provides a protein boost from egg.

The recipe for Sopa de Ajo in this post is an updated version of one posted previously to this site.

My cat Louie has to go to a cardiologist.

I don’t blame you if you guffawed at that, chortled, snorted or simply smiled. I’m convinced that’s just a fancy way of saying “Really expensive vet.”

But my boy is sick. He had a cardiac event over the holidays and lost so much weight I could feel the sharp edges of his spine. He was far from his curious and engaged self. We need to figure out what exactly happened to a guy I’ve dubbed my editor since freelancing full-time.

Louie, who literally showed up on our doorstep — I looked out the back door eight years and saw his big grey noggin and tenuous look — often joins me at the kitchen table during my workday writing sessions. He’ll curl up on the chair next to mine or he’ll sleep in my lap as I type.

He has a reputation for putting me in my place when I’ve finally hit my stride and stopped worrying about comma splices and perfect prose. In those moments when the logjams of words between my brain and finger tips have cleared, he’ll walk across my keyboard critiquing my work. The best moments come when we pause and look at each other. There’s nothing but gratitude in those gazes — his and mine.

All this goes on while directly above us, Otis, the elder statesman of my triumvirate of cats, hides out. I get the feeling he’d like to part of the action but he opts for the quiet safety of my bedroom. He and Lou aren’t exactly buds.

My editor is getting some unexpected time off right now, however. I'm waylaid by a bug that makes it feel as though I swallowed gravel and it lodged in my chest. Everything feels rough, raw and painful. And that’s where Otis, lumbering, shaggy beast that he is, steps in.

If Louie is my editor, Otis, you see, is my doctor, my four-legged Florence Nightingale. He lingers faithfully by my side for every ache, sniffle and Sonny Corleone-like groan that makes its way from my hoarse throat.

Years ago when swine flu was all the hysteria and I had a suspected case, Otis spooned with me the week I laid in bed recovering. He left my side only to eat and visit the litter box, and returned immediately when he was done. Otis didn’t run and hide during my coughing fits. He didn’t skedaddle in disgust when I woke up so wet with sweat it was as though I’d fallen, fully dressed, into a dunk tank. And when I was better, he resumed his usual post on top of my dresser, checking on me briefly in the night with an awkward landing on the bed, a rousing meow and a heavy thunk when he jumped down, seconds later, onto the unyielding hardwood beneath us.

I find incredible comfort with Otis by my side. He’s a big boy with a solid 18 pounds on his Norwegian Forest Cat frame. He’s substantial enough to put an arm around. And his long fur soothes when I bury my face in it while he purrs like a Porsche 911.

I realize this is venturing into overwrought crazy cat lady territory, but I was grateful yesterday at how quickly Otis resumed his doctor duties after nearly a year’s hiatus from the job. If only he had opposable thumbs to make me lunch on my sick days. Alas, I have to buck up and do it myself. If ever there’s a time to do the self-care that is making a good and nourishing lunch, it’s when you’re sick.

I’m not a big fan of cold meds and try to use food as medicine as much as I can. That’s not to say I haven’t caved and popped a few Tylenol to ease the relentless torment brought about by my swollen glands. Still, I'm adding elderberry syrup to the steady stream of liquids I’m drinking. I’m eating oranges as though they’re their own food group. And I’m indulging my infantile need to eat food from a bowl.

So some very garlicky sopa de ajo has been in order. It’s a go-to when a virus and I seem to be playing a game of Risk with my body. I strengthened the arsenal this time, making my usual recipe more healing and more blatant with its flavour, too. The hunk of bread is the best part of this Spanish elixir. It swims in and soaks up pungent broth but still keeps a crunchy crust. I fried sturdy slices of rye in chilli oil this time for a bit of lingering heat. Fresh oregano contributed more antibacterial oomph. A hit of some zealous smoked paprika broke through the dullness overtaking my taste buds.

It’s the next best thing to having an Otis of your own.

Sopa de Ajo is a Spanish soup that's like medicine in a bowl with all that garlic, oregano, and protein boost from eggs. The bread gives this soup substance, and frying it in chili oil gives a warmth that emanates, fending off the chills from whatever's ailing you or a cold winter's day.

Whisk the eggs until frothy and set aside.

Heat the olive oil in a small soup pot over medium heat. Add the garlic slices, stirring until softened but not brown, about two minutes. Add the oregano and paprika and cook for 30 seconds until fragrant.

Add the broth and tomatoes and bring to a boil.

While you're waiting for the soup to boil, prepare the toast:

Heat the chili oil in a skillet over medium heat. Get it good and hot before adding your bread. Otherwise it will just absorb the oil like a sponge. (See note)

Fry the bread until golden brown and crispy on each side, about four to six minutes per side. Remove from heat.

When soup is at a roiling boil, add the whisked eggs. Slowly pour them through the narrow end of the whisk tines at the base of the whisk's handle to separate them and create feathery ribbons in the soup. Use the whisk to break apart any large clumps of eggs in the broth (those first drops of egg always spill quickly).

To serve the soup, place a slice of toast in the bottom of a bowl and ladle soup on top. Garnish with any extra oregano, if you have it, and eat immediately.

I add my halved garlic cloves to the chili oil. Not only does that tell me when the oil is good and hot to add the bread, it infuses the oil with garlic's superpowers.