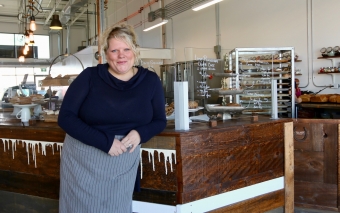 Edible Options is a certified gluten-free bakery in St. Catharines. But even those who can eat gluten won't know it's missing when eating here.

Strip Mall Gems is a series of Eating Niagara, my column that runs in the St. Catharines Standard, Niagara Falls Review and Welland Tribune. This instalment is about Edible Options in St. Catharines.

Jennifer Kuzyk’s eyes glistened as she put the final flourishes on a chocolate cake.

It was stunning in its decadence — a beautiful mess of Toblerone, Turtles, popcorn, Kisses, 24 carat gold leaf and a Curly Wurly that took it from mere baked good to art. But that’s not what made the owner of Edible Options emotional. It was the trio of women at a nearby table in Kuzyk’s St. Catharines bakery that overwhelmed her. They were gabbing over coffee, sharing stories and treats in the shop that Kuzyk built. “I pinch myself when I think about what’s happening behind me. People are in my space, enjoying my baking. It’s like a dream,” Kuzyk said as she looked skyward in an effort to dam the tears. “They chose to come here instead of Starbucks. That’s pretty cool.” As a writer, I get it — the soul-baring and soul-bearing work of creating something for others to enjoy. And when they do enjoy it, it’s a relief that tricks you into wanting to do it again. Still, Kuzyk’s unfiltered emotion caught me off guard. If anyone could convince people to buck mass-produced treats from one of the world’s most popular coffee chains, it’s Kuzyk. The woman is formidable, not just for her cake decorating prowess but because of her tenacity in building a successful certified gluten-free bakery that, unless you asked, you’d never know eschewed that most reviled wheat protein.